The Transit Authority of River City (TARC), serving the Greater Louisville area, has begun adding six new all-electric Proterra buses along the Fourth Street corridor between downtown and Iroquois Park, stopping at some of the city’s most popular destinations. With the new buses, TARC will have a total of 15 all-electric buses on the road, making it one of the largest electric bus operators in the country.

The buses, a $4.65 million investment, were funded primarily with a $3.3 million grant from the Federal Transit Administration’s Low or No Emission Vehicles Deployment Program. Other federal and local funding covered the remaining costs. With the six new buses, TARC’s all-electric fleet is the second largest of its kind in the country, and the largest east of the Mississippi. 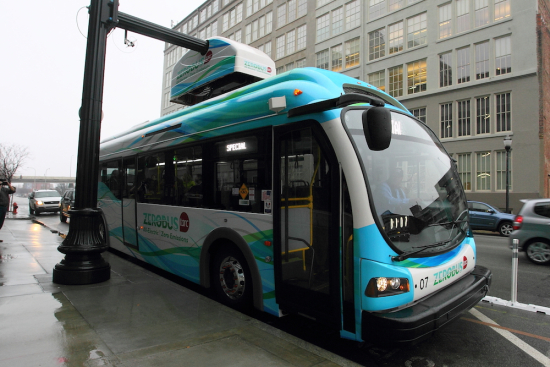 The new buses rely on the same on-route overhead charging technology as the ZeroBus vehicles, but there are differences. Regular fare ($1.75 one-way for an adult) is required on the new electric buses, which operate with other TARC buses on Rt. #4-Fourth Street. The new buses are also bigger than the ZeroBus vehicles and feature TARC’s updated silver, blue and red exterior design.

The new electric buses replace buses that are 16 years old and have traveled more than 600,000 miles. The emissions from the old buses—more than 30,000 pounds each year into the air—will be eliminated with the electric buses. About 60,000 gallons of diesel fuel a year will also be spared.

TARC provides public transportation in the Greater Louisville area with bus routes in Jefferson, Bullitt and Oldham counties in Kentucky and Clark and Floyd counties in Indiana.