From 2011 to 2016, the median all-electric vehicle range in the US increased by just over 10 miles from 73 to 83.5 miles, according to figures compiled by the US Department of Energy (DOE). 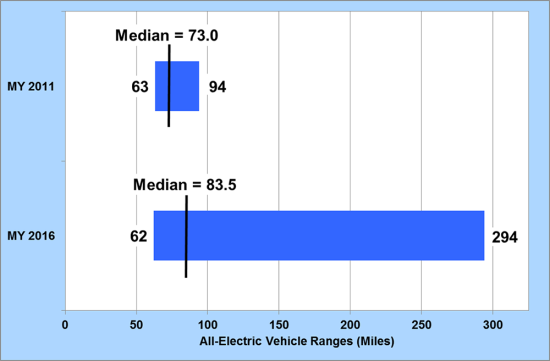 In model year 2011, there were just three different models of all-electric vehicles (AEV) available and their ranges on a full charge (according to the Environmental Protection Agency) spanned from 63 to 94 miles.

By MY2016, the number of AEV models had increased to 12 and the available ranges expanded as well from a minimum of 62 miles for the Mitsubishi i-MiEV to a maximum of 294 miles for the Tesla Model S 90D.

New near future FCEVs with do much better (in all type of weather).