The output of the drive system is 550 kW (750 hp). The shallow underfloor battery has a usable capacity of approximately 80 kWh. This not only allows performance characteristics typical of a sports car—acceleration from 0‑100 km/h in under four seconds, top speed electronically governed at 250 km/h / 155 mph—but also a range of more than 500 kilometers according to the NEDC (more than 200 miles according to EPA). 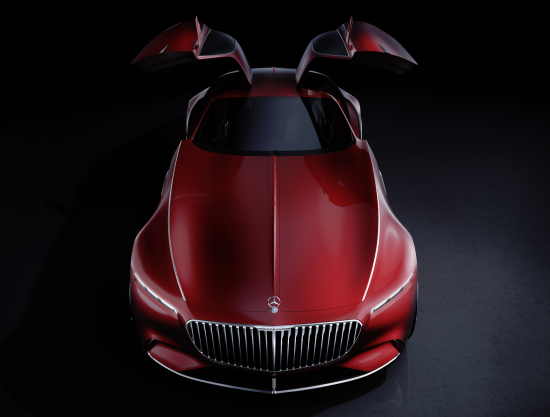 Supporting DC charging based on the CCS standard, the system allows an impressive charging capacity of up to 350 kW. In just five minutes enough power can be charged to achieve an additional range of around 100 kilometers.

(Daimler is a founding member of the Charging Interface Initiative association (CharIN), which is targeting significantly higher standardized CCS charging power up to 350 kW, combined with a complete backward compatibility and interoperability between available components and cars. Other founders of CharIN are Audi, BMW, Mennekes, Opel, Phoenix Contact, Porsche, TÜV SÜD and Volkswagen. Earlier post.)

The battery can either be charged via a cable connection at a public charging station or a conventional domestic outlet or, for even more convenience, it can be charged wirelessly, via an electromagnetic field.

Fusing analog and digital. Daimler says that with the increase in digitization comes a simultaneous need for sustainable analogue solutions, the design of which has been emphasized and in places exaggerated in the concept car. In the Vision Mercedes-Maybach 6 this can be seen in the “hyper-analog” instruments with needles and circular, crystal-look displays.

The classic circular instruments are combined with deep displays and act as a reference to the history of Mercedes-Benz. In contrast, other display elements are digitally integrated into a continuous glass trim part. Information about the seat, for example, can be shown on this digital strip. Map information is also shown in the front area of the strip. Menu content is extended along a digital line which extends to the sides as far as the occupants, who can set their own content ergonomically using touch control.

The front windscreen serves as a transparent display: driving-related data and geographical information is shown across its full width, augmenting the outside world with additional information. This information can be controlled and adjusted by the occupants using gestures.

The luxury padded leather upholstery is a particular highlight. Its traditional look is combined with future technology here—the buttons which would normally be trimmed in leather have been replaced in the upholstered surfaces by miniature “body sensor displays”. These scan the passengers and monitor, for example, their vital functions. As a result, comfort features such as seat climate or the massage function, for example, can be activated or the seat settings adjusted to the passenger. The sensors embedded in the upholstery also record the incidence of light, the colour of the occupant’s clothing and the ambient temperature. This information can be used to trigger new, emotional lighting effects in the interior. 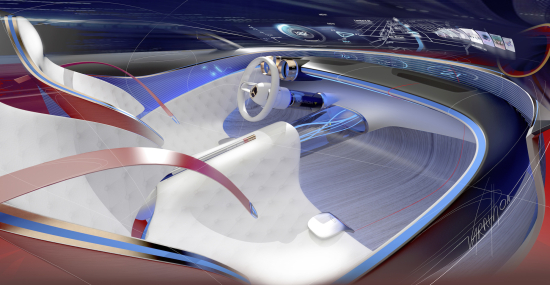 The concept car aims to embody the ultimate in luxury, and this is underlined by the fact that the driver can switch to digital/autonomous mode. Another highlight is offered by the floating, transparent center tunnel, which visualizes the drive system’s electrical energy flow for the occupants.

The Vision Mercedes-Maybach 6 is the first luxury coupé in the series of visionary design show cars from Mercedes-Benz. These include the Vision EnerG‑Force (Los Angeles, November 2012), AMG Vision Gran Turismo (Sunnyvale, 2013) and Vision Tokyo (Tokyo, 2015). These concept vehicles take cues from local trends in design, culture and mobility and make these the focal point of the respective mobility concept. At the same time these show cars are looking far into the future.

Soooo...They took a Jaguar F Type and stretched it waaaaaaayyyyy out?

Is that very long nose necessary for an e-car?

Il looks like coming straight from some cartoon with this caricature like long hood, and ridiculous tail. Electric vehicle don't need these long noses as if they were powered by a v12, the batteries are under the floor and the electric motors are as bulky as a watermelon, so this concept will stay a concept...

About the long hood, they forgot to mention that the car has 3 e-motors behind each other, pulling a common mechanical connection to the rear wheels