With funding from Bioenergy Technologies Office (BETO), Pacific Northwest National Laboratory (PNNL) has been working with industry-partner LanzaTech to convert alcohols derived from captured carbon monoxide, a byproduct in the production of steel, into synthetic paraffinic kerosene, a non-fossil-based jet fuel. The technology not only provides a viable source of sustainable jet fuel but also reduces the amount of greenhouse gasses emitted into the atmosphere.

The team recently reached a significant milestone on the project, producing over five gallons of synthetic paraffinic kerosene in a lab environment. Five gallons is the quantity needed for “fit-for-purpose” testing.

The accomplishment is part of the technology transfer process moving from bench top at PNNL to piloting at Freedom Pines, Georgia.

With tight ASTM fuel specification requirements, both the demonstration of the process and the fit-for-purpose testing need to take place before the technology can be adopted commercially.

The process works in two stages. First, LanzaTech captures waste carbon from refineries and manufacturing plants and feeds the CO-rich gas to microbes that consume the gas and produce ethanol. 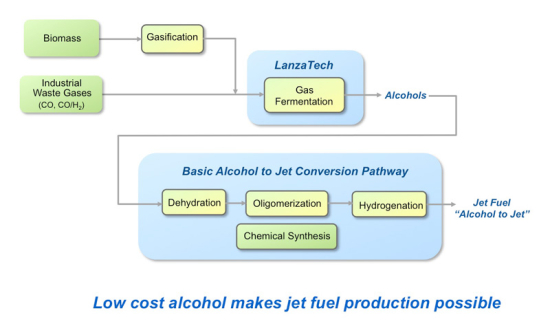 By itself, ethanol is unsuitable for jet engines because it contains oxygen and just doesn’t have the energy needed. After removing the oxygen, the resulting molecule, ethylene, is a gas and simply doesn’t have the properties to be used in modern turbofan engines. Consequently, during the second stage of the process, the ethanol is run through a PNNL-developed catalyst that converts ethanol to jet fuel by removing the oxygen and combining hydrocarbons, a process known as dehydration-oligomerization.

However, ethanol dehydration-oligomerization technologies are typically difficult to control. To overcome the challenge, PNNL borrowed technology it developed to convert methanol to gasoline and created a new, specialized catalyst.

The catalyst first removes water from the ethanol (dehydration), leaving behind ethylene. The small ethylene hydrocarbons are then combined (oligomerization) to form hydrocarbon chains large enough for jet fuel without forming aromatics that lead to sooting when burned. The fuel meets all the specifications required for use in commercial aviation—not an easy thing to do.

Producing 5 gallons of jet fuel at PNNL’s Bioproducts, Sciences, and Engineering Laboratory demonstrates the catalyst is ready for the intermediate stage in testing. Researchers will now seek to produce 2,000 gallons of jet fuel. As PNNL successfully meets milestones, LanzaTech will scale up further.

In 2011, PNNL, Lanzatech and Imperium jointly responded to a DOE call for proposals for a new aviation biofuel research project to convert biomass-derived alcohols to drop-in renewable jet fuel.

Lanzatech has also been working with the UK’s largest bank, HSBC, and Virgin Atlantic on the development of the process that captures waste gases from industrial steel production and ferments them to ethanol, which is then chemically converted for use as jet fuel. (Earlier post.)