Amtrak is contracting with Alstom to produce 28 next-generation Avelia Liberty high-speed trainsets that will replace the equipment used to provide Amtrak’s premium Acela Express service. The contract is part of $2.45 billion that will be invested on the heavily traveled Northeast Corridor (NEC) as part of a multifaceted modernization program to renew and expand the Acela Express service.

The Northeast Corridor (NEC) line covers roughly 730 km (457 miles). In only ten years, the number of passengers has increased from 2.4 million passengers in FY 2002 to 3.5 million in FY 2014. The new trainsets will operate along the Washington – New York – Boston Northeast Corridor initially at speeds up to 160 mph (258 km/h) and will be capable of speeds up to 186 mph (300 km/h) and thus will be able to take advantage of future NEC infrastructure improvements. 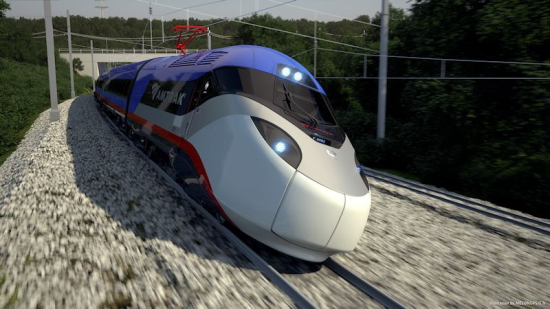 The Avelia Liberty represents the latest development of Alstom’s high-speed train range Avelia. The new trainset will be able to carry up to 33% more passengers than the current Acela trains. The trainset configuration includes an innovative compact power car and nine passenger cars, with the possibility of three more being added if demand grows. Each concentrated power car is equipped with Alstom’s pioneering Crash Energy Management (CEM) system.

The trainsets will be manufactured at Alstom’s Hornell and Rochester, N.Y., facilities, creating 400 local jobs. Additionally, parts for the new trainsets will come from more than 350 suppliers in more than 30 states, generating an additional 1,000 jobs across the country.

The first prototype of the new trainsets will be ready in 2019, with the first trainset entering revenue service in 2021. All of the trainsets are expected to be in service, and the current fleet retired, by the end of 2022.

Each trainset will have modern amenities that can be upgraded as customer preferences evolve such as improved Wi-Fi access, personal outlets, USB ports and adjustable reading lights at every seat, enhanced food service and a smoother, more reliable ride.

In addition to the trainsets, Amtrak is also investing in infrastructure needed to improve the on-board and station customer experience that will accommodate the increased high-speed rail service levels. Amtrak will invest in significant station improvements at Washington Union Station, Moynihan Station New York, as well as track capacity and ride quality improvements to the NEC that will benefit both Acela Express riders and other Amtrak and commuter passengers. Amtrak will also modify fleet maintenance facilities to accommodate the new trains.

Amtrak is funding the trainsets and infrastructure improvements through the FRA’s Railroad Rehabilitation & Improvement Financing program that will be repaid through growth in NEC revenues.

USA have a very long way to go (another 99.5%+) to catch up with China and EU and it may never get there with the current very slow installation rate?

We need something between high speed rail and Hyperloop.

That's about what the Avelia will offer?