Invented by LeMond CEO Connie Jackson and a research team at ORNL’s Carbon Fiber Technology Facility (CFTF), the process is projected to reduce production costs by more than 50% relative to the lowest-cost industrial-grade carbon fiber.

In addition, the new process reduces the energy consumed during production by 60% to as much as 80%, according to the company.

Carbon fiber currently is produced by converting a carbon-containing polymer precursor fiber to pure carbon fiber through a carefully controlled series of heating and stretching steps. In current commercial practice, the precursor—polyacrylonitrile, or PAN—is chemically modified and optimized to maximize the mechanical properties of the end product. The high cost of specialty precursor materials and the energy and capital-intensive nature of the conversion process are the principal contributors to the high cost of the end product.

Acrylic fiber of similar chemistry, however, is produced on a commodity basis for clothing and carpets—a high-volume product that costs roughly half as much as the specialty PAN used in the carbon fiber industry. ORNL researchers succeeded in developing a viable high-volume process using commercially-available low-cost textile-grade acrylic fiber precursor materials.

The process also has three major units of operation: oxidation, carbonization and surface treatment that are engineered and configured to have a highly efficient use of capital and operational resources. 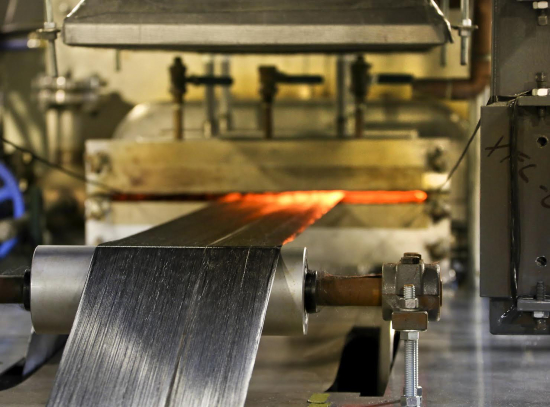 The reduction in energy consumption is through utilization of increased fiber mass (PAN is exothermic in oxidation) as a heat source in oxidation as well as having 4X throughput vs. conventional carbon fiber technology.

The energy consumption reduction is likely closer to 80% than 60% per unit carbon fiber, the company said; 60% is a conservative estimate based on loading capability.

The process was developed in the DOE Carbon Fiber Technology Facility (CFTF), a semi-production scale facility open to industry and academic researchers, with funding from the DOE’s Advanced Manufacturing and Vehicle Technology Offices. ORNL began accepting license applications in March 2016.

Jackson and several of her ORNL teammates joined LeMond Composites in 2016.

We have assembled the only team in the world that has executed this proven technology which uniquely positions us to deliver a successful outcome for our customers and stakeholders. From experience, I know that having the right team is a distinct business advantage.

ORNL’s Carbon Fiber Technology Facility began operations in 2012, supported by the Department of Energy’s Advanced Manufacturing and Vehicle Technologies offices, to demonstrate the possibility of low-cost carbon fiber at a semi-production scale.

The development of this new process demonstrates the value of coupling basic and applied research, which is a hallmark of ORNL, and it underscores the Department of Energy’s commitment to addressing our nation’s most pressing energy challenges. The Department’s sustained investments in scientific research and development and in specialized facilities such as CFTF are enabling a variety of applications that will lead to improvements in fuel efficiency and position US industry for global success. Thom Mason, Oak Ridge National Laboratory Director

Growing demand from the automotive industry is due in large part to the global push to increase the fuel economy of nearly every vehicle produced. In the USA, the demand is being driven by the Corporate Average Fuel Economy (CAFE) standards. These standards demand a fleet-wide average fuel economy of 54.5 mpg by 2025. The single best way to improve fuel economy is to reduce the weight of the cars and their component parts. ORNL’s and Jackson’s technology puts CAFE standards within reach, ensuring cost-effective weight reduction through the use of high quality carbon fiber without sacrificing the strength and safety of the steel it replaces.

We understand the growing demand from the automotive industry and we are currently in negotiations with several of the world’s leading automotive brands and their suppliers.

For the wind power industry, carbon fiber can be used to make turbine blades lighter and stiffer, thereby increasing the efficiency of the system. Previously, carbon fiber was too expensive for maximum utilization in this market.

Additional sectors, including shipping, air travel and marine, could see significant energy savings through the use of carbon fiber in the light weighting of their containers, planes, and ships.

As a result of the affordability of this carbon fiber we believe that world-wide mass adoption will be inevitable. We are positioning ourselves to grow and meet this demand by locating our company in Tennessee, a state that through Governor Haslam and Commissioner Boyd’s forward-thinking programs like Tennessee Promise, will provide a steady stream of quality employees for our company. Our close proximity to ORNL adds a value beyond measure and we are looking forward to future collaborations with them. Additionally, with the input of the University of Tennessee, The Institute for Advanced Composites Manufacturing Innovation (IACMI), and the emerging composites corridor, I believe the Knoxville area will become the world hub for carbon fiber in the future. On a personal note, the bike riding in this area is incredible.

The first commercially available product will be ready in Q1 of 2018.

Founded in 2016, LeMond Composites is focused on the manufacture of high-volume, low-cost carbon fiber composites.

Great stuff, let's see more bizjets and choppers and bikes.
Not sure about cars - could be worth it for small engine ICEs - battery cars are likely to be so heavy there is little point in making the chassis lighter.

Lighter bodies and parts can make room for more batteries to extend range.