Starting in the 1970s, the average compression ratio of engines—which up to that period had evolved pari passu with octane ratings—began diverging from the octane trend due to advanced engine design and controls, as illustrated by data compiled by the US Department of Energy (DOE).

In 1973, the Environmental Protection Agency (EPA) mandated a reduction in the lead content of gasoline and eventually banned the use of lead in fuel for on-road vehicles. Since that time, other sources have been used as fuel oxygenates to control engine knock and the average octane rating of gasoline has been fairly constant at about 88-90 AKI (anti-knock index). 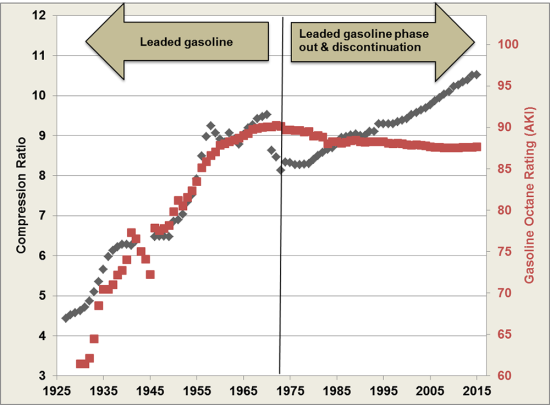 There is some concern, DOE noted, that in the future, auto manufacturers will reach the limit of technological increases in compression ratios without further increases in the octane of the fuel.