General Motors and the US Army Tank Automotive Research, Development and Engineering Center (TARDEC) will reveal a Chevrolet Colorado-based fuel cell electric vehicle in October at the fall meeting of the Association of the United States Army (AUSA) in Washington, D.C.

The fuel-cell version of the mid-size pickup is being developed under an agreement between TARDEC and GM signed in 2015 (earlier post). The collaboration enables TARDEC to access consumer-driven automotive technology for use in military applications while providing GM with feedback on non-standard fuel cell technology applications. 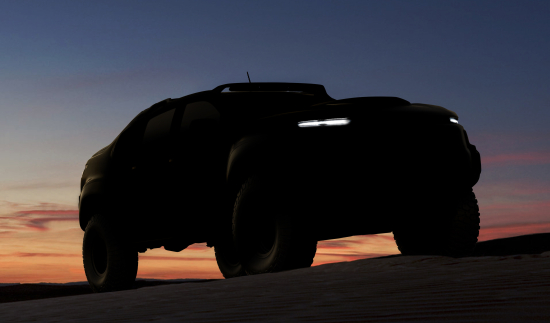 Consistent with the Department of Defense’s desire to leverage commercial innovation in its next-generation technologies, the Army will use the vehicle to demonstrate the capabilities fuel cell electric propulsion and power generation systems can bring to the military, including quieter mobility, exportable power generation, low-end torque and water generation. The Army intends to conduct user assessments and demonstrations in 2017.

Hydrogen fuel cells as a power source have the potential to bring to the force incredibly valuable capabilities. We expect the vehicle to be quiet in operation and ready to provide electricity generation for needs away from the vehicle. With fuel cell technology advancing, it’s an ideal time to investigate its viability in extreme military-use conditions.

Fuel cell propulsion has low-end torque capability that is useful in an off-road environment. It also offers additional characteristics attractive to both commercial and military off-road use.

Neither GM nor TARDEC released vehicle specifics, but Rogers said the Army is focusing on the technology and its capabilities, regardless of the platform.

This project is another example of how fuel cell propulsion can play a role in non-traditional applications. We need to continue pursuing these opportunities along with our plans for production of a commercial fuel cell system in the 2020 time frame.

The Armed Fores could us help to solve lower cost H2 making, storing and distributing?

Alternatively, bio duel/ethanol FCs could be further developed and used for armed forces vehicles and others.

FCV are not quiet. They need a dehydration system in the form of a really powerful air pump. Like a 3000 watt air pump for a 100k watt FC. That is noisy. By comparison a BEV is completely noiseless at low speed. And unlike hydrogen electricity is available and easy to make even near combat zones. Also BEVs can deliver far more peek power than FCV that can be used for power weapons like lasers or magnetic rail guns that are the future for combat vehicles.

I can see it now. Sixteen hours plus to recharge the batteries of a battle tank.

The sky is falling. People are still working on FC.

I do not know where you pull the 16 hours charging time from. A Tesla can charge a 100kwh battery in 40 min. When cost is not a high priority as in military equipment you can install the needed cooling and power electronics to charge in 15 min no matter how large the battery pack is. 15 min is not a serious limitation for a combat vehicle. A tank will need a 500kwh battery. Tesla can pull 500,000 watt from a 100kwh battery so a BEV tank would have 2,500,000 watt for rail guns and lasers. Try and get that from a FC. It would be the size of a bus and its air pumps would be as noisy as a diesel tank at full speed.

It is so easy to dismiss FCV that anyone still supporting it looks like a person without a healthy judgment.

Both technologies are capable of and demonstrate the ability to get the job done.

Both can support renewable read non fossil fuel energy storage which is I.M.O. the only meaningful measure.

Rather there will still remain sustainability mismatch while ever people live beyond the capability of eco system services to provide.

While many politicians demonstrate the willingness to pitch the dog eat dog mentality we really can't afford at this point in human history. Short term'ism' is still the dominant paradigm, Evolution is slow and its redundant behavioural artefacts are pervasive.

Due to their almost unlimited very quick charge-discharge capabilities, new Ultra-caps can drive laser guns as well if not better than lithium batteries. H2 FCs or bio fuel FCs could recharge the ultra-caps as required.

Harvey ultracaps can do the job but also introduces wait time until you can fire again. Takes time to charge an ultracap. With a 500kwh, 2500k watt battery you can fire non-stop until that battery is used up. No wait time. That advantage may determine the outcome of a battle.

However, we still need to develop those power weapons for BEV tanks to take over. A 2500k watt laser on a tank would be a dream weapon that could stop incoming misseles and grenades and shoot down planes and drones and blow up other vehicles or kill enemy combatants. When a 2500k watt laser hit an object it will evaporate so fast it creates an explosion. Not a big one but enough to kill a person or take down a rocket. And it can be fired continuously if needed to blast holes in walls etc.

Yes Henrik, improved laser guns may be one the near future weapon. They are currently being installed in many US war ships. An ultra-cap bank is often superior to batteries because they can be charged and discharged faster (as required for laser guns) but both could work.

How long will it take to increase power to the level required to shoot down aircraft, drones, rockets, vehicles etc? is a good question.

Might be a good idea to introduce tighter gun laws and reinterpret that 2nd amendment.

Those near future killing machines (together with appropriate detection equipment) will probably be fully automated or unmanned and/or remote controlled.

Accidents will happen but no more than with current manned aircraft and ships.

A UK firm has designed and built the ideal all terrain long leg vehicle to carry lasser weapons to the right places. It looks like a Mars Rover with large bullet proved wheels but could go most places on Earth.

Both the vehicle and laser weapon could be mass produced in the early 2020s.