The new SiC-based inverter has a power density of 12.1 kW/L—close to the US Department of Energy’s target of 13.4 kW/L by 2020. By way of comparison, a 2010 electric vehicle could achieve only 4.1 kW/L. Further, says Iqbal Husain, ABB Distinguished Professor of Electrical and Computer Engineering at NC State and director of the FREEDM Center, the silicon carbide prototype inverter can transfer 99% of energy to the motor—about two percent higher than the best silicon-based inverters under normal conditions. 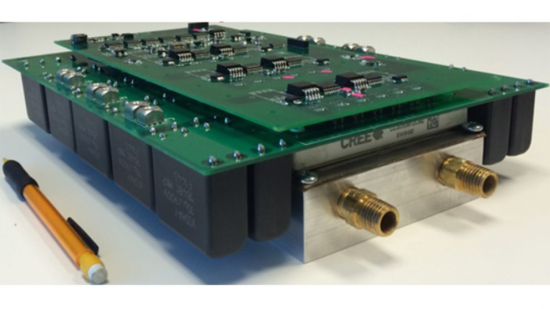 The design of the new power component is also more effective at dissipating heat than previous versions. This could allow the creation of air-cooled inverters, eliminating the need for bulky (and heavy) liquid cooling systems.

Bi-directional interleaved DC-DC boost structure and a three-phase voltage source inverter (VSI) were utilized with the primary focus on the size, weight and loss reduction of passive components. A stacked layer approach was used for a unique PCB-based busbar, ultra-low profile gate driver, and controller board.

The Power Chip on Bus (PCoB) power module approach that reduces parasitic inductance through an integrated power interconnect structure. The PCoB maximizes thermal performance by direct attaching power chips to the busbar, integrating the heatsink and busbar as one, and uses a dielectric fluid, such as air, for electrical isolation.

The team is presenting two papers on the inverter at IEEE Energy Conversion Congress and Exposition (ECCE) next week in Milwaukee.

We predict that we’ll be able to make an air-cooled inverter up to 35 kW using the new module, for use in motorcycles, hybrid vehicles and scooters. And it will boost energy density even when used with liquid cooling systems in more powerful vehicles.

The current SiC inverter prototype was designed to go up to 55 kW—a level of power seen in a hybrid vehicle. The researchers are now in the process of scaling it up to 100 kW—akin to what would be needed in a fully electric vehicle—using off-the-shelf components.

The researchers are also in the process of developing inverters that make use of the new, ultra-high density SiC power component that they developed on-site.

Sounds good - one of the many non-battery ways to improve electric cars of all hues.

On a watt/cuin this is better than the million dollar winner of the Google little box challenge. Google was focusing on solar inverters with much lower output. Could this technology be scaled down for PV panel level inverters? The winning entry came in at 142.9 w/cuin, this inverter is 198 w/cuin.

This stuff is so encouraging. Batteries are starting to accelerate their pace of improvement. Charging infrastructure is becoming available. The electronics are improving. Nearly every major manufacturer is announcing double digit new EV models between now and 2020....except the morons at Toyota. LOL

The new car market is going to look MUCH different in 2020. And once it gets started it will accelerate quickly. People are going to be stunned at how we "didn't see EV dominance coming" by 2025.

250-300 mile BEVs for $25K. A supercharger network that will be rivaling the fossil fuel infrastructure.

Dave I agree that by 2020 the BEVs and their infrastructure is so mature and affordable that growth from 2020 to 2025 will have BEVs go from niche to mainstream.

For all this to happen we need fully autonomous tech (no human drivers needed at all) and I think with every car maker and many giant tech companies working on it feverously we will get there by 2020. After 2020 it will not take long until all vehicles made are fully autonomous BEVs. The autonomous tech can be replicated as easy as cell phones and every car sold will have it by 2025 at the latest. It will take a little longer before every vehicle sold is a BEV because you need to build all those giga battery factories and also really large factories for electric motors and power electronics. They are like a 100 times larger than the factories making sensors and chips for autonomous cars so they take longer to build.

Once again, we are mixing up electrically driven cars and autonomously controlled cars. The two do not need to be combined, there is no reason at all not to have an automatically controlled ICE car (such as the Google Hybrid test vehicles).

Most luxury cars are "luxed out" with leather and AC and huge performance - IMO they have gone as far as they need to (and way further in fact). The obvious next improvement is automatic driving, ideally fully automatic driving that can drive you when asleep or drunk or working.
This does not require electric drive, it just requires a bunch of sensors (Vision (stereo?), Lidar, radar, Ultrasonic) and a ton of vision, sensing and control software.
Once written, the software will have a close to zero cost of reproduction (think MS Windows/Office) and the sensors are getting cheaper and better rapidly, so we can expect the AV systems to come out on high end cars (in 3-5 years) and trickle down to medium cost ones in say 10 years. It shouldn't cost more than 1-2K in 10 years (for the sensors + processor) on a mass market car.

A mid market smartphone costs about $300 at present (in a shop). Radar is becoming ubiquitous and cheap, lidar, while sounding exotic is also becoming solid state and reasonably cheap (see www.quanergy.com). Ultrasonic: 10-20$ on ebay.

The short term solution is to throw sensors at the problem and remove the less useful ones in 5-10 years. In the meantime, if you have a sensor on a car and find a better way to use it, well done.

Currently you pay $2-5K for an engine power bump in a BMW. How much better would it be if you could get Auto driving for an additional $5K and forget the extra speed (200 Kph will do most people anyway (with a speed limit of 120).

Take my cost estimates from above and see what happens when we do it for a fully autonomous gasser. Fuel cost is now 12 cents per mile not 4 cents. Base vehicle cost is now 17.5 cents (=35,000/200,000) not the 3.5 cents as it is for a gasser. Maintenance cost of 4 cents per mile is the same in this situation because although gassers have more maintenance with oil and mechanical parts and brakes that needs to be replaced the BEV will be used for 1,000,000 miles and therefore also have maintenance cost refurbishing the cabin every 200,000 miles that gasser that are scrapped every 200,000 miles does not have. Insurance and profits will be the same as for self-driving BEVs.

I think your numbers are probably in the right ballpark for the cost savings of a BEV. However, there are a couple of points:
1) This depends on the average person being capable/willing to consider Total Cost of Ownership.
Here in America, the average person thinks Climate Change is a hoax, that space aliens have abducted (and probed) at least 20% of the population and that Trump is a viable candidate for the most powerful job in the world. In other words, we're F'ing morons.

2) I think this price advantage exists for cars with drivers just as much as autonomous cars.

Why do you conflate the autonomous and EVs? It seems that both are viable, but I'm still not seeing how they depend on each other. Are you saying that the down times to charge work better when there is a "shared fleet" so maybe 10% at a time are off charging and we need say "50% less total vehicles" because it's like a giant Uber fleet instead of private ownership?

I'm honestly trying to understand why you tie the two things together.

The only current problem with BEVs are frequent and long recharge times. This will soon be solved with larger capacity batteries and much quicker wireless chargers.

Secondly, electrified vehicles are by their nature more apt to be driven autonomously. Their fully electric components lend themselves to be more easily and rapidly controlled.

Thirdly, BEVs already have all the (on-board) e-energy required for multiple sensors, computers, controllers and actuators.

UBER like fleets equipped with e-ADVs of various size could start commercial service by 2025?

Regarding your second commend the advantage for BEVs are limited to driverless cars because they are the only one you can actually put 1,000,000 miles on in 10 years as it is used by many people every day not just one that otherwise would only be able to do 150,000 miles in 10 years. A vehicle owner will need 67 years before he can drive 1,000,000 doing only 15,000 miles per year. Also battery life is restricted by calendar life and 10 years is it for most batteries regardless of how long its cycle life is.

Longer lasting, much lighter, higher performance inverters will benefit ALL electrified vehicles i.e (HEVs, PHEVs, BEVs and FCEVs,) may they be ADVs or not.