Together with DoorBird, the Berlin-based start-up, and Hörmann, the gate and door manufacturer, Volkswagen is presenting a world exclusive at the IFA (Internationale Funkausstellung) in Berlin: the means to connect to the door station at home using your vehicle’s infotainment system. 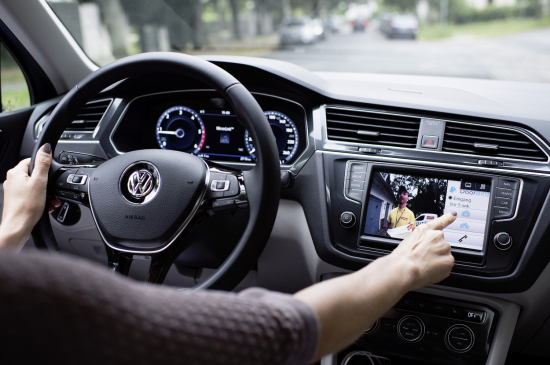 The car’s infotainment system can alert you when a visitor or messenger rings at the door at home, even while you are driving. The driver can communicate with the person in question and in future will also be able to open the door, no matter where they happen to be, and without even needing to touch the phone.

The idea itself is not new, but achieving it from a moving car is. In future, it will even be possible to open house and garage doors made by Hörmann, Volkswagen’s cooperation partners.

What was shown as only a concept in the Volkswagen BUDD-e electric concept car at the International Consumer Electronics Show in Las Vegas is now reality. All Volkswagen cars which have Mirror Link technology, with which the Volkswagen App Connect smartphone app can be viewed on the touch screen of the infotainment system, are compatible. App-Connect (incl. Mirror Link) has been available as an option in almost all Volkswagen models since May 2015.