The newly announced 2017 Nissan Rogue Hybrid, the latest addition to the popular Rogue crossover lineup, offers a second powertrain choice for Rogue buyers for the 2017 model year in both FWD and AWD applications. Like the MY2017 2.5-liter inline 4-cylinder gasoline engine-equipped standard Rogue models, the Rogue Hybrid offers freshened exterior and interior styling, additional safety, security and driving aid technology and a wide range of standard and available comfort, convenience and utility features. Rogue Hybrid will join the lineup by the end of 2016. 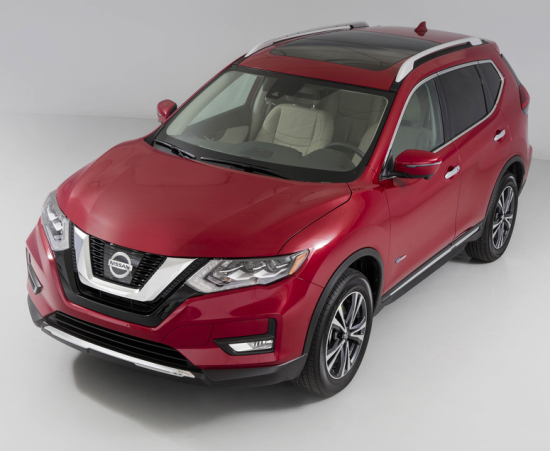 At the core of the Rogue Hybrid gasoline-electric hybrid system is Nissan's advanced Intelligent Dual Clutch Control system. The first of the two clutches is a dry clutch installed between the 4-cylinder engine and the electric motor, where the torque converter would normally be, and the second is between the motor and Xtronic transmission.

The high-output lithium-ion battery is able to charge/discharge quickly, which contributes to high-speed, precise control of the electric motor and optimum clutch control, and in combination enable smooth start and quick shift changes. An Intelligent Regenerative Braking system partially recharges the battery during vehicle braking and additional fuel economy is provided by an Idle Start/Stop system.

In addition, with use of the compact Lithium-ion battery located under the rear cargo area, the Rogue Hybrid maintains its flat rear floor for easy passenger access to the rear seat and little reduction of cargo room.

Sooooooo.....when does this 2x more powerful electric drivetrain trickle up to the Pathfinder? Would be a nice combination with their new variable compression turbo.