BMW will launch its longer range BMW i3 at the Paris Motor Show. (Earlier post.) With higher-energy-density 94 Ah lithium-ion cells, the battery pack of the new BMW i3 (94 Ah) is 33 kWh, increasing the car’s range on a single charge from 190 to 300 kilometers / 118 - 186 miles (NEDC cycle), with a real-world range of up to 200 kilometers (124 miles)—even in adverse weather conditions requiring use of the heater or air-conditioning.

The 125 kW/170 hp hybrid synchronous electric motor accelerates the BMW i3 (94 Ah) from 0 to 100 km/h (62 mph) in 7.3 seconds, making this BMW i3 the sportiest and, with electricity consumption of 12.6 kWh/100 km (NEDC), most efficient electric vehicle in its segment. Revised electric motor management and further optimized, low-rolling-resistance tires are among the many detailed modifications that have helped to reduce electricity usage. 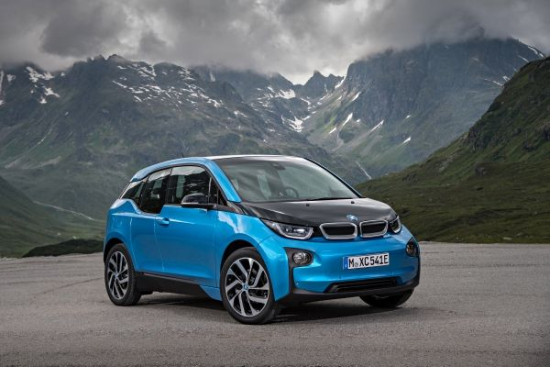 The existing BMW i3 with 60 Ah battery, which entered the market three years ago, will continue in the line-up alongside the new model. In both cases a version with range extender will also be offered.

The battery pack is designed to last the full life of the vehicle, and comes with a warranty of eight years or 100,000 kilometers (62,000 miles). As before, battery modules can be swapped individually if necessary, so there is no need to replace the whole battery. This is not offered by any of the i3’s competitors.

With the launch of the new 94 Ah battery, BMW is also offering a battery retrofit program under which BMW i customers driving an all-electric BMW i3 (60 Ah) have the option of swapping their existing battery pack for the new 33 kWh unit. This program will initially be offered in selected markets. A highly sustainable “second life” solution has been found for the used 22 kWh batteries traded in under this scheme, which will be put back into service in stationary grid storage applications.

The BMW i3 is the lightest vehicle in its segment. Despite an increase in vehicle weight to 1,245 kilograms (2,745 lbs), in terms of performance the BMW i3 (94 Ah) is subjectively as agile as the 60 Ah version. This is down to an optimized power curve courtesy of modified power electronics and systems management, and an improved voltage curve under load due to physical factors.

On both battery versions, the power is supplied to the rear wheels via a single-speed transmission, allowing the BMW i3 to accelerate continuously without torque interruption to its top speed, which is limited for efficiency reasons to 150 km/h (93 mph).

11 kW three-phase charging. To take account of the increased battery capacity, the AC fast charging system has been upgraded. The multi-phase AC fast charger for the new 94 Ah battery can now provide 11 kW charging—corresponding to the most common speed used at public charging stations.

This system allows the BMW i3 (94 Ah) to be recharged in less than three hours, despite the significant increase in its battery capacity. That’s the same time it takes to charge a BMW i3 (60 Ah) at 7.4 kW.

Using the charging cable supplied, the BMW i3 (94 Ah) can also be recharged from a household power socket. At a rate of 2.8 kW, the charging time is then under ten hours.

BMW i Wallboxes. In summer 2016, BMW i introduced a new BMW i Wallbox for convenient and fast home-garage charging. This Wallbox is set up to work with the new charging electronics. In addition to single-phase operation, it also offers up to 22 kW three-phase charging, allowing the BMW i3 (94 Ah) to be recharged in two hours and 45 minutes.

In late 2016, this unit will be followed by two further versions offering additional convenience and network functions (BMW i Wallbox Plus and BMW i Wallbox Connect). These Wallboxes can be matched precisely to the needs of fleet customers or multi-car private households, and can also be integrated into a smart home network, allowing the car to be charged using environment-friendly home-generated solar electricity.

ChargeNow – at home or abroad. BMW i’s ChargeNow network is the world’s largest public charging network for electric and plug-in hybrid vehicles. It now comprises more than 40,000 public charging points in 25 countries, operated by a wide range of providers.

The ChargeNow card and app offer customers one-stop access to the services of all participating providers in this international network, complete with cashless payment and billing. This means customers are spared the time and effort of having to register with each different provider separately. To help drivers locate and select a participating charging point, the ChargeNow network is integrated into the navigation system and apps.

Since the nine-liter gasoline tank is located in the front of the vehicle, trunk space remains unchanged at 260 litres, expanding to 1,100 litres with the rear seats folded down. The 0 to 100 km/h (62 mph) acceleration time for the range-extender i3 is 8.1 seconds.

Is it just me or is this a needlessly ugly car ?
I am sure the Tech is fine, but really - what were they thinking ?

Does Samsung SDI still provides BMW its batteries? It looks like BMW prefers not to mention it right now. Hope Samsung will not lost such a partner...

Seams with this new 33KWH Battery pack that BMW is getting a little more serious, at least on the i3 formfactor. Combined with its REX option that should make a great PHEV for people interested in that small and ugly formfactor.
Now we need BMW to offer such 33KWH capacity, with Dual electric Motors totalling >200KW, in a real BMW car formfactor, say an X6/X5/X4/X3 in priority. Problem is to do this right and in a profitable way that could last for a while, they need to come out with a comparable "all electric" Drive train for their real Cars & SUVs, as they have made for the tiny i3, with a comparable non-Tracting Range extender trading less Range Anxiety with the REX against less all EV range and huge savings on battery costs, to get to comparable or lower prices as Tesla with a good PHEV... i3 will not cover that.