The world’s largest 2nd-use battery storage is starting up. The 13 MWh project is now nearing completion after a construction time of just under one year; a total of 1,000 battery systems from second-generation smart fortwo electric drive cars are being grouped into a battery storage in Lünen, Westphalia. Partners in the project are Daimler AG, The Mobility House AG and GETEC.

The first power units are already in the grid. The 13 MWh battery storage will put its full capacity at the disposal of the German energy market before the end of this year. The output will be available to the winner of the weekly auctions among the network operators for primary controlling power range, with fully automatic energy storage and feed-in. 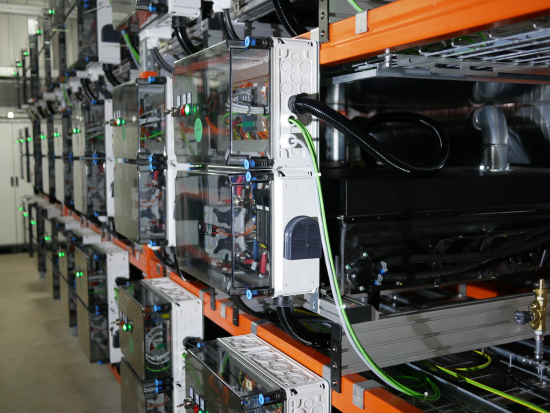 As energy is increasingly fed in from fluctuating, renewable energy sources such as wind farms or solar power stations, high-capacity battery storages are the key to stabilising power networks. According to figures from the German Ministry for the Economy and Energy (BMWi), 40 to 45 percent of power consumed in Germany is to be generated from renewable resources by 2025, increasing to 55 to 60 percent by 2035.

The lifecycle of a plug-in or electric vehicle battery does not end after the vehicle’s operating life. If used in stationary power storage, the systems are fully operational even after the service life guaranteed by the manufacturer—with slight capacity losses only of secondary importance. Cost-effective use in stationary operation is thus possible for at least an estimated ten years longer. Reusing the modules from electric cars in a battery storage doubles their economic value and also demonstrably improves their eco-balance.

With the project in Lünen, the four partner companies cover the entire battery added value and 2nd-use chain: From the manufacture and configuration of the battery systems by Daimler subsidiary ACCUMOTIVE and the corresponding range of electric and plug-in hybrid vehicles from Daimler AG to the installation and marketing of the stationary battery storage to the energy markets by The Mobility House and GETEC, and finally the recycling of these battery systems at the end of their lifecycle and the return of the valuable raw materials to the production cycle, which will be the remit of recycler REMONDIS.

It depends on what the car owner will put up with.

How old are the second gen smart for twos?

I'd love a future used model 3 battery as a battery backup for my whole home... the powerwall wont work for me unless I get like 4 or five. Not enough for possible peak loads. The battey could run a home for several days, and peak usage wouldn't be an issue as it can run a 100kw motor. Total cost would probably junk value for the battery + 3k for transfer switch and inverter. (I'd hope under $10,000 all together installed)

I randomly loose power from odd things, sometimes 7 days in a row, a generator would be nice, and I was looking at Co-generation but $40K for a 5Kw unit is absurd to me (and that's just for the unit). (I'd build my own, but I am sure even if it is immaculate and properly engineered it wont pass an inspection, all it is is a generator with liquid cooling that has a heat sink inside a hot water tank.

@CheeseEater88 - "The second generation was introduced in 2009 to 18 markets with the objective to gather experience about how customers use and charge electric vehicles. Daimler initially planned to build 1,000 vehicles, but as demand exceeded the company’s expectations, more than 2,000 Smart Fortwo electric drive cars were produced."

I read that on wiki, but its just mind boggeling that almost the whole production fleet is off the road or is on a second or third battery for a car so new.

if it was a model with 60K a year or some volume to it, I'd be a little less perplexed.

It is possible that these are mostly engineering samples, granted with government monies. (usually you have to scrap anything that could go on another car when the study is over for most as its not a production run)

@CheeseEater88
The production Smart Electric Edition (ED) is the third generation so the 2nd gen were market / tech testing were not designed for full life support and usage, just (large sale) demonstration and stats gathering. I am guessing that as they were recalled the batteries were removed as there was no on-going service planning.

@Jeffgreen54
Renault change batteries when capacity has fallen to 70%.