Major automotive suppliers see national fuel economy standards as important for long-term planning and investment and don’t want to see them altered by US policymakers, according to a first-of-its-kind industry survey commissioned by CALSTART and conducted by Ricardo Energy & Environment.

The firm polled and interviewed 23 suppliers, almost all of them global Tier 1 suppliers that sell parts directly to automakers. According to the survey:

When presented with a list of technologies analyzed within a National Academies of Science report (earlier post) that might be used to meet fuel-efficiency standards, suppliers picked turbocharging and engine downsizing, along with higher-speed automatic transmissions, as the most critical. 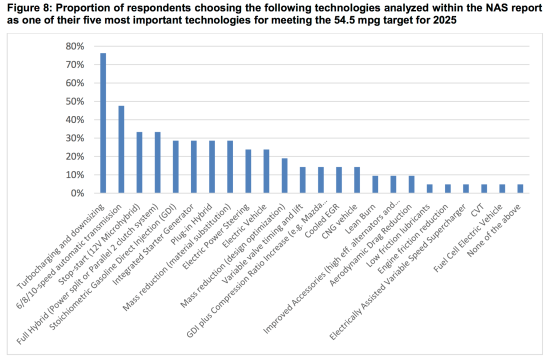 Suppliers were split on whether or not meeting the standards would ultimately require more electric vehicles than are already slated to hit the roads under state zero-emissions vehicle requirements.

Deployment of electric vehicles is required under the ZEV mandates that exist in California and various other states (requiring electrification in 15% of new light-duty vehicle sales by 2025, which equates to about 4% of new light-duty vehicle sales nationwide). 29% of respondents indicated that they would expect at least an additional 2% of electrified light-duty vehicles above the ZEV mandate requirements to be necessary to meet the 2025 targets. In comparison, 24% of survey respondents felt that there would be sufficient improvements in ICE technologies, lightweighting and hybridization technologies to meet the 2025 targets without additional electrification.

During the interview, Eaton indicated that achieving the GHG targets is dependent on the level of EV penetration. While the targets are still achievable without a large increase in the EV penetration rate, the targets could be achieved more easily if they were complimented by investments in EV charging infrastructure. BorgWarner suggested that an electrification level of 30% will be needed to meet the targets, which is even higher than the estimate presented by the EPA in the latest midterm report.

Although not named in the NAS report, some respondents pointed to 48V mild hybrid/start-stop-coast technologies and P0 hybrids/e-assist as being useful toward meeting the standards.

Earlier this summer, the Environmental Protection Agency (EPA), Department of Transportation (DOT) and California Air Resources Board issued a technical analysis of Corporate Average Fuel Economy (CAFE) and greenhouse gas standards for light-duty cars and trucks, focusing on mileage requirements for model years 2022 to 2025. The agencies will take public comments on the analysis until 26 September, and will formally propose new requirements next year.

Starting in 2008, agencies reformed fuel-economy requirements to make them footprint-based, meaning smaller vehicles have higher miles-per-gallon requirements while larger vehicles have lower ones. Suppliers emphasized that even as all vehicle types become more efficient, consumers are expected to buy more large cars, trucks and SUVs if gas prices remain low.

Overall, federal agencies project a fleet-wide fuel economy average of between 50 and 52.6 miles per gallon under test conditions for the 2025 model year. That translates to an average of 36 miles per gallon in actual on-road performance, which is about what today’s gasoline-powered Honda Fit already achieves.

This survey underscores the degree to which deploying new fuel-efficient technology is already baked into companies’ businesses plans. Companies are clearly ready to innovate and see the upside in the standards

Question for the group: Will we need CAFE standards in the US if we enact some sort of carbon pricing, like a tax?

Carbon taxes may generate a lot of revenue but at the current gasoline prices I'm not sure they'd affect consumer behavior much. Correct me if I'm wrong but $50 per tonne would increase the price of gasoline by 50 cents a gallon which would still be much less than the prices of 2014 which appeared tolerable to most North American consumers. Even when the economics work for hybrids as they did in 2014 they are still a hard sell. Stopping consumers from buying gasoline is going to take aggressive and unpopular policies. Much easier for a Chinese dictator to implement than a leader of a democratic country although somehow northern European leaders are able to have some success.

Looks like there is no love for fuel cells among the respondents. That does not bode well for massive build-out of a refueling network outside of the areas where funds are already committed.

Economist like the sales tax and think the CAFE standards are a waste.

They make a good case that the public needs some education on the subject and politicians need to move the public opinion, as well. I do think a carbon based tax would be the only fair way to go about it. Otherwise everyone would be move to highest carbon fuel for max MPG. That being said, it is interesting that the Cummins E85 engine surpassed gasoline on MPG. So, gas has 19.6 pounds of carbon per gallon as opposed to ethanol's 12.73.

CAFE standards or carbon pricing? Any reason we can't have both?

It is my opinion that we should progressively phase in a carbon tax. However, I am not holding my breath on this. Just because it would be a smart policy will not make it happen. I do understand why the major vendors want some certainty about future regulations as it allows for rational future planning.

Business likes predictability, it allows them to plan.

Carbon taxes applied across the board will affect the electric market before the vehicle market.  $100/tCO2 adds about 3.3¢/kWh to the cost of power from NGCC plants, over 5¢/kWh to open-cycle plants.  This is roughly double the current price disadvantage of nuclear power in "deregulated" markets.  If the unreliables have their absolute grid priority taken away so that grid operators can curtail them to allow clean base-load to operate, we'll see a lot of interest in new clean base-load with cheap charging for PEVs overnight.  This gets straight to the root of fuel consumption and direct displacement of carbon-emitting fuels.

$100/ton or even tonne would have an impact on electricity and mobility. Just not sure if that is politically feasible. Maybe if Trump told his supporters that Hillary intends to impose a $500 tax they'd think they got away easy at $100. Here in Alberta out accidentally elected left leaning provincial government is trying to go to $30 cd (<24 US) and is finding it unpopular.

$100/ton pricing would fly and be embraced by Trump supporters if the Left would compromise. Meaning to give up something of government control and current tax load in return. It would have to be a big bone, but that's the way.

A nuclear base load with smart grid interplay to maximize the utilization. Makes a lot of sense as compared to attempting the same with unreliable's. The cost of the project would be less as well as magnifying the benefit. Funny, everyone trying to make unreliable power replace conventional grid and forgot that just improving utilization of base load can do more and do it cheaper. Currently, we may have the strategy backwards.

A good analogy of unreliable power is the wind turbine water pump for live stock. Wind power utilized in remote non grid rural area. The need had maximum flexibility, as the cattle could go thirsty for a while and the stock tank did have cheap storage. So, we need some inventiveness to utilize more wind power at remote location that have large energy needs, but can operate with non dispatchable electricity production. There should be applications for this if we can invent flexible usage or where most of the product cost is power. Hydrogen gas, aluminum production, kilns, fertilizer production, chemical production, cement production, processing, etc. If would be a new class of manufacturing. A lights out unattended operation that can switch on and off upon power availability. It would need low cost hardware and the transportation cost not a primary limitation.

Funny, everyone trying to make unreliable power replace conventional grid and forgot that just improving utilization of base load can do more and do it cheaper. Currently, we may have the strategy backwards.

It wasn't forgotten, it was the goal.  Gas interests are financing all the big "environmental" organizations.

because gas is under $2 where I live.

Cheap gasoline (about $2/gal) counteracts CAFE. There are more ways to accelerate the switch from ICEVs to BEV/FCEVs.