ELIX began as a spin-out from the University of British Columbia (UBC) in 2013 to commercialize its patented, Magneto-Dynamic Coupling (MDC) technology. ELIX MDC technology uses the interaction between magnetic fields to create a “remote magnetic gear” system with full 360-degree freedom of orientation. MDC operates at a frequency of 80-400 Hz, 1000 times lower than a resonant inductive system. 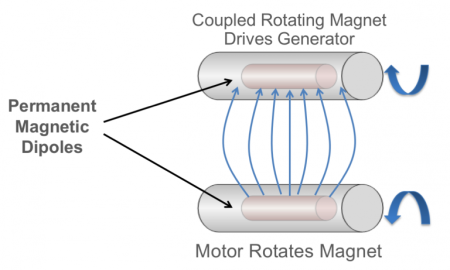 MDC is an inherently low-frequency technology; as such it produces much less electromagnetic interference (EMI) than a high-frequency system. It also generates much less heat and loss in nearby materials, meaning it can be used in a wide range of conditions. MDC is naturally suited for underwater applications and it can even send power through metal. MDC is ideal for use in hazardous environments as the ELIX system does not rely on electrical contact between the self-contained units.

MDC provides safe, low-frequency, wireless power at multiple power levels, with the high efficiency demanded of a wireless power connection. While originally developed for automotive charging applications, the ELIX system can be adapted to meet a wide range of electrical power needs from biomedical implants to robotics to the harsh environment of subsea industrial applications. MDC systems can also be combined for even higher power transfer to meet the demanding needs of industry and eMobility while maintaining low-frequency and high-efficiency operation.

The investment will be used to finalize the development of ELIX’s E8K chargers, and to strengthen the team, especially in the areas of engineering and supply chain. These hires will help to ensure that ELIX can meet its goals to ensure mass availability of its 8000, 4000 and 1000 Watt wireless chargers by the end of 2017.

ELIX says that its wireless power transfer technology features an almost total absence of electro-magnetic radiation, making ELIX the safest technology for public and medical charging; a reduced cost per Watt when scaling the chargers to higher power levels, making ELIX a preferred charging mechanism for electric buses and cars; and high efficiency of its transmission.

Zongshen bring unparalleled engineering and manufacturing experience to the company. Whereas ELIX has one of the best R&D teams in Canada, it would have taken years to scale up manufacturing, as we could not find that kind of manufacturing expertise in Canada. By teaming up with Zongshen, ELIX will be able to enter the market much faster.

ELIX is headquartered in Vancouver, Canada.