Chevrolet has introduced the all-new 2018 Equinox compact SUV with a choice of three turbocharged engines—including the segment’s first turbo-diesel in North America. The choices are a 1.5L turbo, a 2.0L turbo—matched with GM’s new nine-speed automatic transmission—and a 1.6L turbo-diesel.

The new Equinox is the first Chevrolet model in North America to use an all-turbocharged, multi-engine powertrain lineup. The 2018 Equinox goes on sale in the first quarter of 2017 in North America and rolls out to approximately 115 additional global markets later in the year. 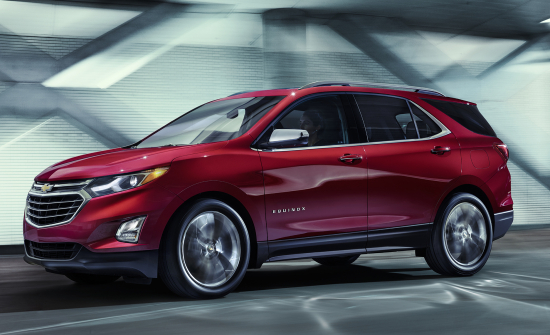 The 1.6L turbo-diesel is an all-new design, with output estimated at 136 hp (101 kW) at 3,500 to 4,000 rpm and 236 lb-ft of torque (320 N·m) at 2,000 rpm. A variable-geometry turbocharger helps generate a broad torque band that makes the engine very responsive at low rpm. It also features stop/start technology and is one of the industry’s most refined diesels.

Ninety percent of the engine’s peak torque is available from 2,000 to 5,600 rpm, along with maximum torque from 2,500 to 4,500 rpm. That strong, sustained torque production helps the new Equinox offer a 3,500-pound (1,585 kg) max trailering capacity that is equal to the current model’s capacity with the available V-6 engine.

An on-axis design, in which all the gears are in line with the crankshaft, and GM’s first application of a selectable one-way clutch help reduce the package size of the 9T50, making it roughly the same size as a six-speed transmission.

Safety. The Equinox offers a comprehensive suite of available active safety technologies and adaptive crash-avoidance features that provide ease of use and peace of mind on the road.

Teen Driver is also offered, allowing parents to set controls and review an in-vehicle report card in order to encourage safer driving habits, even when they are not in the vehicle.

Available advanced active safety features to enhance driver awareness on the road include radar- and camera-based adaptive technologies that can provide alerts to potential crash threats, allowing the driver to react and make changes to avoid them, including:

Equinox sales have reached more than 2 million since its launch and it is Chevrolet’s second-best retail selling vehicle, after the Silverado.