Earlier this year, Recargo, parent company to PlugShare, a leading charging station locator app, was awarded more than $1.6 million from the California Energy Commission (CEC) to help complete key routes of the West Coast Electric Highway (WCEH), a network of fast charging and Level 2 electric vehicle stations expected to stretch from Canada to Mexico. Recargo is contributing more than $575,000 of its own money toward the project.

The award was part of nearly $9 million in grants that went to four companies—Chargepoint Inc.; EV Connect Inc.; NRG EV Services LLC; and Recargo, Inc.—which will install 61 DC fast chargers at 41 sites along major routes on Interstate 5, Highway 99 and Highway 101. Fast chargers allow vehicles to fully charge in 20 to 30 minutes. Additionally, 40 sites will have one Level 2 charger, and one site will have two Level 2 chargers. Level 2 chargers allow most vehicles to go from zero to full charge in four to eight hours. (Earlier post.)

Recargo will be placing DC fast-charging stations at key sites in Buellton, Santa Maria, San Luis Obispo, Paso Robles, King City, Greenfield, Gonzales, and Gilroy. The stations will be compatible with both the CCS plug used by electric vehicles manufactured by BMW, GM, and Volkswagen, and the CHAdeMO plug used by Kia, Nissan, and Mitsubishi.

Recargo plans to install a minimum of one 50 kW charger plus one Level 2 station at each of the eight sites. In two of the locations, Recargo will also install an additional 50 kW charger. The stations will be located directly off US-101 in safe, illuminated areas with the kinds of amenities drivers and passengers look for during long-distance trips. The fast chargers will enable EV drivers to recharge their batteries in about 30 minutes. 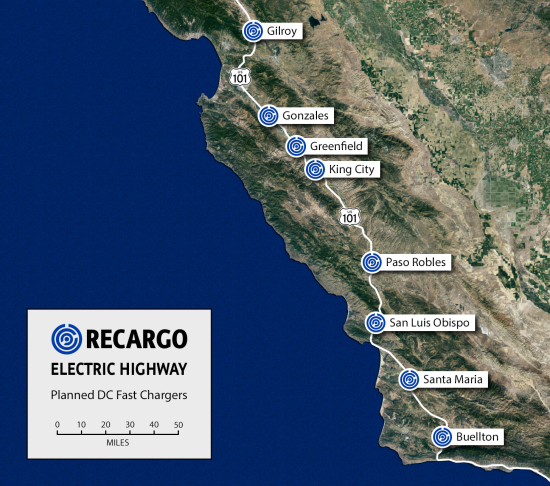 The CEC project will be enhanced by a similar effort from the Monterey Bay Air Resources District, which is looking to spend about $1.2 million over the next five years to add even more DC fast-charging stations in the tri-county area.

We want to work with the right partners to develop EV infrastructure in our District, which ultimately adds real value to the electric vehicle and the ownership experience. This is a great partnering opportunity to expand EV infrastructure along all the main corridors in our District as well as to enhance the connectivity along the California Electric Highway. As demand for electric vehicles increases, we need to make sure that the right infrastructure is there to support EV drivers after the sale.

Recargo wants to be one of those partners, and hopes to earn some of the funds being offered by the Air District to place more stations in new areas or increase the number of chargers at existing locations.

In 2015, Recargo hired Ashley Horvat, fresh from her role in the Oregon State government as the Chief Electric Vehicle Officer. Horvat, Recargo’s VP first Vice President of Strategic Initiatives, told Green Car Congress that the company has been very busy on the infrastructure piece, having recently executed a subcontract with Black & Veach—the company working with Tesla on its Supercharger buildout.

One of the challenges facing the infrastructure buildout, Horvath said, was providing a high standard for the ease of plugging in as Tesla does within its system. While Tesla is pairing directly with the fast charging infrastructure—as it owns it—Recargo’s challenge is to provide a network for all the other EVs that are out there.

Being able to pull up and use the charger is a big plus. Redundancy is another advantage. If there is only one charger available, folks are not as likely to use it. We want to provide an experience similar to Tesla’s and also link it more tightly to solar, creating sites that are more scalable where there is substantial renewable energy.qdash Ashley Horvat

Horvat also mentioned that Recargo could be interested in a possible partnerhsip with Tesla, perhaps on a site location basis—i.e., co-locating a Tesla Supercharger.

Horvat also said the the company was working on charging power higher than 50 kW; one of the challenges for a third-party in that task is trying to figrue out what each automaker is capable of doing, she said.