A new study by Transport & Environment (T&E) shows that Volkswagen is currently selling the least polluting (Euro 6) diesel vehicles. However, the report “Dieselgate: Who? What? How?” also found that no brand in Europe complies with the latest Euro 6 air pollution limits for diesel cars and vans in real-world driving.

For the in-house analysis, T&E analyzed emissions test data from around 230 diesel car models. Data were taken from the investigations conducted by the British, French and German governments, as well as a large public database. The carmakers’ ranking was built with on-road performance figures mostly measured in real world driving. Among the real-world findings per car brand: 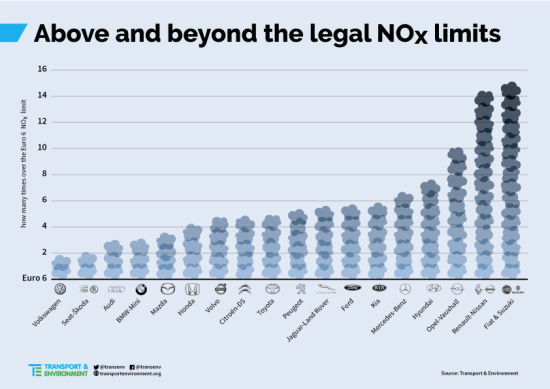 For Euro 5 vehicles, the five worst performing companies were (in order of the highest emissions): Renault (including Dacia); Land Rover; Hyundai; Opel/Vauxhall (including Chevrolet); and Nissan.

The ICCT authors observed that Volkswagen’s performance on the Euro 6 side was not a result of the VW Group “learning its lesson” from the Dieselgate scandal; the group brought its Euro 6 cars to market ahead of the scandal was exposed. VW Group’s Dieselgate engines were mostly of the previous Euro 5 generation.

Loopholes. T&E charges that diesel cars are failing to operate their exhaust after-treatment systems for most of the time the car is driving, “almost certainly illegally misusing” a loophole in the rules governing the use of Defeat Devices.

Over the last 12 months investigations in Europe (notably the testing programmes in Germany, France and the UK) have shown that the scandal engulfing VW represents the tip of an iceberg. Most carmakers systematically manipulate cars to pass emissions tests through highly questionable and probably illegal means. This results in performance that achieves regulatory limits in a lab but exceeds these by 10 times and more when the emissions are measured on the road. Such behaviour that has been going on for at least six years and probably longer. Regulatory limits for NOx emissions are also breached by a significant margin when tested in conditions even slightly divergent from those prescribed in the EU test protocol (NEDC).

The principal reason for such gross exceedances is that carmakers routinely switch-off technologies that clean up the exhaust when the car is driven on the road, and only operate these fully during the narrow conditions of the tests. This is partially to improve official fuel economy figures but is also due to questions about the durability of the emissions treatment systems carmakers have used—specifically exhaust gas recirculation systems that pump hot exhaust gases with a lower oxygen content back into the cylinders to lower production of NOx. Investigations have revealed that national testing authorities have failed to scrutinize the way in which these exhaust after-treatment systems operate (despite a legal requirement for them to do so) and for a decade have turned a blind eye on this unprecedented maltreatment of emissions regulations.

In addition to automakers’ exploitation of regulatory loopholes, T&E further charged, the laboratory test procedure used to measure the pollutant and CO2 emissions in Europe today is “totally unrealistic and undemanding and in no way representative of real-world driving conditions”.

Defeat strategies. Through its analysis, T&E identified three general types of technical defeat strategies which significantly raise emissions on the road. These include the use of:

The European Commission is far from blameless. It took too long to develop new real world tests that should have identified and resolved some of the issues much earlier. It acceded to the demands from the Member States to weaken new NOx limits for cars and delay their introduction. It designed the type approval regulation in a way that meant no effective checks and balances were built into the system. However, the Commission has acted promptly to reform the system of type approval with good (but not sufficient) proposals to strengthen the rules. It has also made clear its intention to bring infringement proceedings against member states that fail to enforce the law on defeat devices – it now must do this and coordinate an EU-wide recall of vehicles abusing emissions regulations that will ensure air pollution limits are met earlier throughout Europe and fewer people die prematurely.

Great VW. I am tingling all over. Pay your fines, do the CARB political dance, and move on.

I will tell you that Urea is "Cheap". My wife just got the BlueDef stuff at Walmart for $3 a gallon. Hurry up and give us the diesel hybrid electric option on all your vehicles. (Btw. We don't own a VW.) The folks who would buy these things are not interested in self-driving connected app-full contraptions. Save these vehicles for the City folks.

Dr. Strange Love - you still don't get it, do you?

VW is the scapegoat. As this article so clearly explains, VW is actually the least offender. And the real scandal is the incompetence and/or corruption that has clearly been rampant within the authorities whose job it is to protect us and the environment. I don't know whether it is because they were hopelessly incompetent, or because they were lobbied and perhaps paid by manufacturers, that the tests are so utterly incapable of measuring the only RELEVANT thing - namely how the vehicles behave in the real world. But it certainly is telling that most cars emit more than 1000% of what they are supposed to. Any rudimentary attempt to test almost any single vehicle in somewhat more realistic conditions would have sufficed to arouse suspicion.

The goal of this regulation is after all to prevent people from getting sick and dying prematurely because the air they breathe is so polluted - NOT to satisfy some random set of conditions in a lab. And the regulator has done an incomprehensibly bad job to ensure the rules they came up with relevant and checking that manufacturers complied.

And THAT is what ought to be the fallout from dieselgate. I am so thankful that someone is FINALLY saying some critical words about the role of government in this mess. I have been saying since the scandal broke that this is where the true scandal and important problem is located. Even if VW had been the worst offender rather than the least, this would remain true.

Terawatt. I agree with you. We are now understanding how woefully bad tailpipe emissions are, gas or diesel.

My point is that DEF is inexpensive and if the SCR system requires more of it, so be it. It works.

My wife buys it at Walmart. It has become as mainstream as a 40Ib bag of WaterSoftner salt for your brine tank.