The processor will deliver 20 TOPS (trillion operations per second) of performance while consuming only 20 watts of power. As the brain of a self-driving car, Xavier is designed to be compliant with critical automotive standards, such as the ISO 26262 functional safety specification. 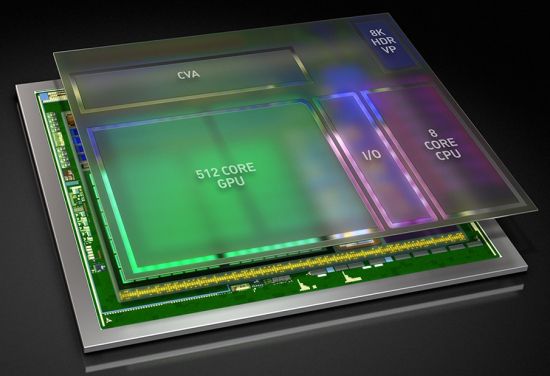 Because autonomous driving is an incredibly compute-intense process, the need for an efficient AI processor is paramount. Xavier will bring self-driving car technology to automakers, tier 1 suppliers, startups and R&D organizations that are building autonomous vehicles, whether cars, trucks, shuttles or taxis.

Xavier samples will be available the fourth quarter of 2017 to automakers, tier 1 suppliers, startups and research institutions who are developing self-driving cars.

"...Xavier is designed to be compliant with critical automotive standards, such as the ISO 26262 functional safety specification."

This is the very first time I've seen any of the active driving assist/"autonomous" products advertising 26262 compliance. Of course a computing device in and of itself doesn't bestow compliance to this standard -- the company using it requires a soup-to-nuts certification of processes throughout its hardware/software design and manufacture cycle for the system in question. But good for you Nvidia.

(need to say that before Henrik and other adherants show up), but nonetheless this kind of product made available to all players is part of the lightning-fast commoditization happening in today's top-tier automotive suplier universe. The same is happening (or has happened) with Power Electronics but is relatively boring and unnnoticeable to the great unwashed. Expect the same with batteries (gigafactory or not -- it doesn't matter).

There is no shortage of bright people in the world, nor is there a shortage of manufacturing capacity for ever-improving products.

NVIDIA have really got their "stuff" together.

I worked in Image Processing with VAX and accelerators,
it is VERY compute intensive to do real time.

This is a real success story.

Competition will be fierce but will lead to better products.

I don't know about fierce competition, there are very few companies with the image processing, real time computing and sub micron technologies.

Herman Tesla does use a Nvedia chip to run its current autopilot and infotainment system. It is a now old Tegra 3 that probably has less than 1% of the computing power of this coming Xavier that furthermore is optimized for deep learning computing as needed for the Autopilot application. I would not be surprised if this Xavier is a 1000 times faster than the current chip for Tesla’s autopilot.

Self driving vehicles will always be in the shop for Suspension and Wheel repairs. This is a Risk that cannot be quantified right now.

They will. A lot of the autoindustry will say the same regardless of self-driving cars. However, those working on ICE, exhaust system and most of those working in transmission will be gone. Many new jobs will be created in batteries, and EV engine and power electronics. A few new jobs will come to driverles tech development and production.

In the not too distant future, between 12 and 20 hardware manufacturers will be able to produce the automotive computer units required. That is healthy competition.