Toyota introduced the C-HR—or Coupe High-Rider—crossover at the Paris Motor Show. Fitted with the latest-generation hybrid power plant, the C-HR generates CO2 emissions as low as 82 g/km, with combined-cycle fuel consumption of only 3.5 l/100 km (67.2 mpg US).

Delivering 90 kW/122 DIN hp, this new hybrid powertrain is not only more efficient and lighter than the previous system, but also offers sharper performance. Detailed design changes to the gasoline engine have resulted in a thermal efficiency of 40%. Other hybrid system components have been made lighter and smaller, and have been repositioned for optimum packaging, further contributing to the car’s low center of gravity. 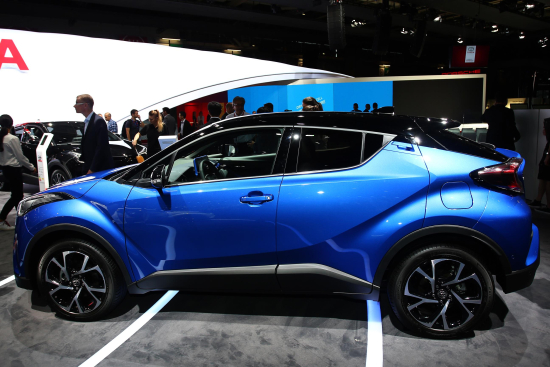 This new hybrid powertrain offers the response and the fluidity of a dynamic driving style that suits the C-HR’s dynamic design philosophy, Toyota said.

The C-HR is also available with a new 1.2 liter turbo engine, which debuted in the Auris. Delivering 85 kW/116 DIN hp and 185 N·m of torque, this unit generates CO2 emissions as low as 125 g/km and returns combined fuel consumption from 5.4 l/100 km (43.6 mpg US). It may be mated to either a 6-speed manual gearbox or a Continuously Variable Transmission. CVT equipped versions are available with either front- or all-wheel drive.

The design and development of the Toyota C-HR chassis received the full attention of the Chief Engineer Hiroyuki Koba, himself a keen driver. From the very outset of the project, he travelled thousands of kilometers along European roads in order to understand not only the requirements of the road network, but also the way that Europeans drive.

I have noticed, for example, that Europeans have a much more fluid driving style, based on a more acute observation of traffic. They avoid obstacles simply by adapting their trajectory and speed and will focus to carry on speed aiming for efficient progress, while elsewhere in the world the preferred approach is very often to stop. This has prompted us to work with our European team on driving precision in all aspects of the vehicle. We wanted to achieve performance on a par with a good C-segment hatchback.

Steering was designed to be perfectly linear which, together with the optimum limitation of rolling motion, gives the Toyota C-HR remarkable driving precision for a crossover, Toyota said. Limiting body movement, which generally affects tall cars in particular, also has a direct influence on comfort. Even on often battered roads, the car remains remarkably composed and accurate.

The Toyota C-HR remains true to the general features of the concept-cars introduced in Paris in 2014 and in Frankfurt in 2015. Its coupe-like lines are a testimony to the resolve of its designers to create a style that stands out in the Toyota range, and to establish a new direction amongst mid-sized crossovers.

The Toyota C-HR’s unique character demonstrates the flexibility that the TNGA (Toyota New Global Architecture) gives to vehicle developers in the three key areas of design, powertrain and dynamics, enabling them to deliver a new and fresh take on the increasingly commoditized crossover segment.

The all-new Toyota C-HR combines a coupe-like upper body with the underpinnings of an SUV. 4,360 mm long, 1,795 mm wide, 1,555 mm high (Hybrid) and with a 2,640 mm wheelbase, the production vehicle features a diamond architectural theme with wheel arches projecting prominently at all four corners to emphasise the new crossover’s strength and rigidity. The C-HR modulated structure combines a powerful lower body and raised ground clearance with the cabin profile of a coupe.

With a combined average of 67+ mpg and very low emissions, the performance of this Hybrid crossover from Toyota will be difficult to match.

With a 1.2l hybrid this seems possible.