Transforming on demand, Infiniti’s VC-Turbo technology uses an advanced multi-link system to raise or to lower the reach of the pistons, detecting the car’s driving condition and driver inputs, and instantly selecting the most suitable compression ratio. The engine is able to offer any compression ratio between 8:1 (for high performance) and 14:1 (for high efficiency). 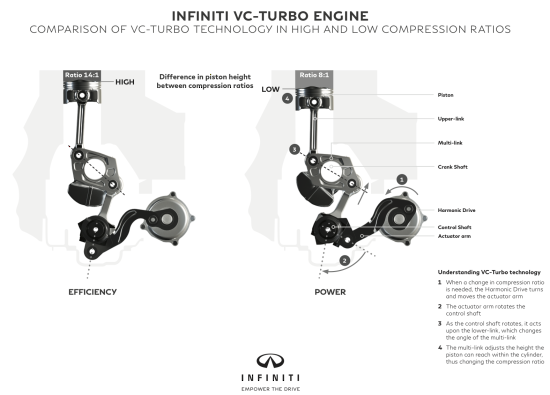 With a development target power output of approximately 200 kW (268 hp / 272 ps) and 390 N·m (288 lb-ft) torque, the 2.0-liter VC-Turbo in-line 4 engine will be comparable to certain six-cylinder gasoline powertrains for performance, while significantly outperforming them in efficiency. Infiniti engineers are targeting 27% greater fuel efficiency over similarly-powered V6 gasoline engines, depending upon vehicle application.

Technology. Infiniti has patented more than 300 new technologies specifically designed for application in the new four-cylinder VC-Turbo engine. Among these is the world’s first multi-link system and an electric motor actuator with Harmonic Drive reduction gear, which together enable the engine to transform its compression ratio continuously.

Infiniti connects an electric motor to the Harmonic Drive reduction gear with a connecting control arm. The Harmonic Drive rotates according to the compression ratio required, which then rotates the control shaft at the base of the engine and, in turn, moves the multi-link mechanism.

Changing the multi-link angle adjusts the height of the top-dead-center of the pistons, varying the compression ratio. An eccentric control shaft varies the piston stroke position for all four cylinders at the same time.

The layout of the multi-link mechanism makes the VC-Turbo engine smoother than conventional in-line engines, boasting low noise and vibrations levels similar to those of a V6 engine. The multi-link system means the piston connecting rods are almost vertical during the combustion cycle, rather than moving wider laterally as in a traditional crankshaft rotation.

In addition, the multi-link design operates the ideal reciprocating motion when compared with the traditional connecting rod and crankshaft system. The smooth-running VC-Turbo therefore benefits from uncommonly low levels of vibration and does not require any balance shafts. Conventional four-cylinder engines require a pair of balance shafts to reduce second-order vibrations.

Infiniti benchmarked the 2.0-liter VC-Turbo’s vibration characteristics against other four-cylinder turbocharged engines. In the VC-Turbo, engine vibration noise was reduced from a benchmark average of approximately 30 dB to just 10 dB. Such a low level of vibration makes the VC-Turbo four-cylinder engine almost as smooth and refined as a V6.

With a variable compression ratio, the VC-Turbo engine is able to switch between both Atkinson and regular combustion cycles, without interruption. Each cycle enables greater combustion efficiency and optimal engine performance as the combustion ratio transforms.

The gasoline VC-Turbo engine employs a combination of both multi-point injection (MPI) and direct injection (DIG), further improving the engine’s ability to balance efficiency and power in all driving conditions. 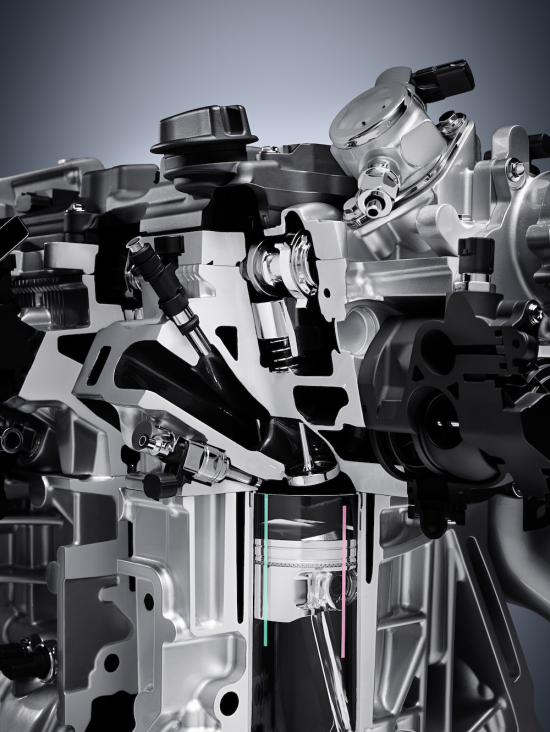 As the engine shifts to allow greater performance or efficiency, a wide-range, single-scroll turbocharger works in conjunction with the VC-Turbo system to maximize acceleration response at any engine speed or compression ratio.

For example, if the driver is cruising at a steady speed but needs to accelerate to overtake, the turbocharger reacts instantly to boost acceleration as the engine shifts seamlessly to a lower compression ratio. The turbocharger enables the four-cylinder VC-Turbo engine to benefit from greater efficiency than a larger, naturally-aspirated six-cylinder engine, yet ensures equivalent performance. The single-scroll turbocharger improves the loss of thermal energy and exhaust pressure, and keeps weight and cost low.

An integrated exhaust manifold is built into the engine’s aluminum cylinder head to further improve packaging, performance and efficiency. The compact size and neater packaging of the cylinder head enables engineers to position the catalytic converter next to the turbo. This reduces the length of the flow path for hot exhaust gases, allowing the catalytic converter to heat up quickly and start the emissions control process sooner. The close proximity to the turbo facilitates the VC-Turbo engine’s immediate accelerative responses. 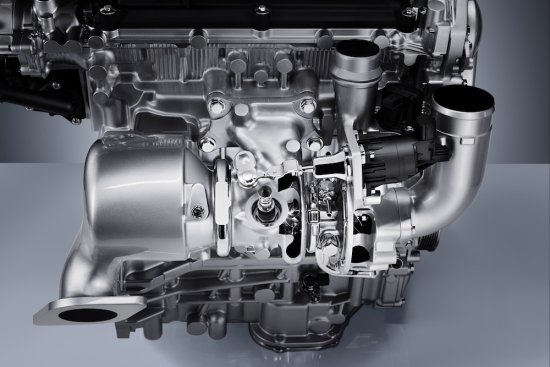 An electronically-controlled wastegate actuator maintains boost pressure by closely controlling the flow of exhaust gases through the turbocharger. This ensures fuel efficiency and performance under all conditions, even as the compression ratio and engine speeds change.

As the turbocharger recirculates hot exhaust gases back into the engine, the VC-Turbo’s high capacity intercooler lowers the temperature—and therefore the density—of the air, further enhancing the efficiency of the forced induction system.

A multi-way flow control valve (MCV) provides further thermal management. The MCV optimizes the distribution of coolant to the radiator, cabin heater, and oil cooler depending on current conditions and compression ratio. The MCV’s zero-flow coolant flow mode cuts coolant distribution during a cold start to reduce frictional loses while the engine warms up.

Packaging. The new engine’s block and cylinder are made from lightweight aluminum alloys, with the multi-link components manufactured in a high-carbon steel alloy. Compared to the ‘VQ’ V6 engine, the VC-Turbo engine weighs 25 kg less, and occupies a smaller engine bay footprint.

In addition to its downsized nature compared to the larger, naturally-aspirated V6, the layout and design contributes to improved packaging and weight savings throughout the powertrain. 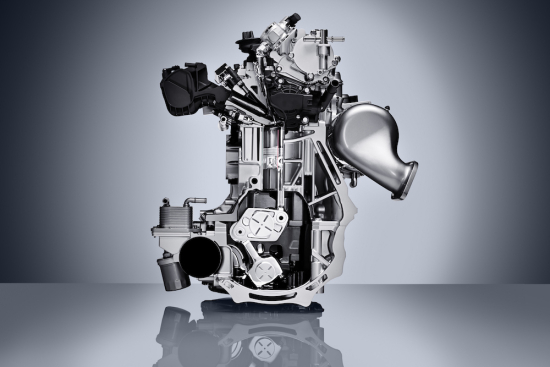 The cylinder head with integrated exhaust manifold is compact in size and enables more intelligent integration with the turbocharger and catalytic converter. Cast in aluminum, the cylinder head and manifold union contributes to the engine’s overall reduction in weight. The mirror bore cylinder coating technology also negates the need for cast iron cylinder liners.

With the multi-link system’s minimal lateral movement, development teams were able to do away with the pair of balance shafts that conventional four-cylinder engines require in order to minimize vibrations. With efficient packaging of its new multi-link components, the VC-Turbo engine will therefore occupy a similar space under the hood in relation to other four-cylinder in-line engines.

Only one cylinder engine with heat recovery for the same power level as Nissan VCR can be found at www.hybrid-engine-hope.com

A four cylinder six cycle would be a good range extender.
It would be efficient without the need for a cooling system, just a condenser.

Too little, too late and a waste of money; When Nissan should be building hybrid plug ins and EVs they are spending their innovation money on obsolete ICEVs. They should be trying to bring high density batteries to market, that's where the future is, not in dirty fossil fuel cars. Nissan, you just don't get it!

Lad, I WANT an efficient compact low cost gasoline engine in my car, is it clear now ?

One person does not make a trend.

In addition, the multi-link design operates the ideal reciprocating motion when compared with the traditional connecting rod and crankshaft system. The smooth-running VC-Turbo therefore benefits from uncommonly low levels of vibration and does not require any balance shafts. Conventional four-cylinder engines require a pair of balance shafts to reduce second-order vibrations.

Do you realize that Nissan, with Renault, is currently the biggest seller of EVs?

What exactly do they not get? Should one of the world's biggest corporations only work on one thing at a time? Your misplaced idealism would quickly put them out of business.

a similar engine (diesel) was first made in 1989 in Russia. The petrol engine was patented in 2001 (jointly with Russia NAMI Institute and Daimler-Chrysler).
Therefore, to say that Nissan invented this engine "for the first time in the world" incorrectly.
This VCR engine (with more optimal configuration) was tested in Russia 10 years ago.