Alstom is among the first railway manufacturers to develop a passenger train based on fuel cell technology. To make the deployment of the Coradia iLint as simple as possible for operators, Alstom offers a complete package, consisting of the train and maintenance, as well as also the whole hydrogen infrastructure thanks to help from partners. 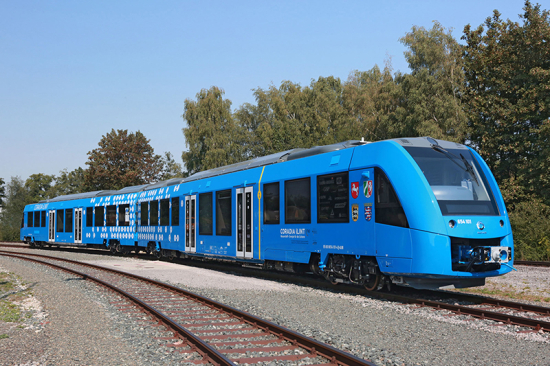 The Coradia iLint fuel cell stack is the core of the system, and is supplied with hydrogen on demand; the trains are powered by an electrical traction drive. The fuel cell provides electrical energy by combining the hydrogen stored in tanks on-board with oxygen from ambient air.

High-performance Lithium-ion batteries store energy from the fuel cell system when not needed for traction or from kinetic energy of the train during electrical braking and allows supporting energy delivery during acceleration phases. They accumulate the energy not immediately used, in order to later supply it as needed. This results in a better management of the fuel consumption.

This launch follows the Letters-of-Intent signed in 2014 with the German Landers of Lower Saxony, North Rhine-Westphalia, Baden-Württemberg, and the Public Transportation Authorities of Hesse for the use of a new generation of emission-free train equipped with fuel cell drive.

Alstom is proud to launch a breakthrough innovation in the field of clean transportation which will complete its Coradia range of regional trains. It shows our ability to work in close collaboration with our customers and develop a train in only two years.

Alstom’s Coradia range of modular regional trains has a proven service track record spanning more than 16 years. More than 2,400 trains have been sold around the world and demonstrate a high availability rate. Coradia iLint is based on the service-proven diesel train Coradia Lint 54. It will be manufactured in Salzgitter, Alstom’s largest site.

Despite numerous electrification projects in several countries, a significant part of Europe’s rail network will remain non-electrified in the long term. In many countries, the number of diesel trains in circulation is still high—more than 4,000 cars in Germany, for example.

Alston deserves a hand for this unique solution to replace ALL existing diesel passenger trains and eventually cargo trains.

The new step will be long haul cargo trucks?

A great way to cover the non-electrified gaps in Europe’s rail network - and possibly the short-sightedness of the North American network too.

They could use SOFCs with turbine after burners in locomotives. Liquid fuel could be preformed, the efficiency would be better than diesel.

Ground transports (and associated operations) are currently number one GHG and polluters in USA & Canada and many other countries.

FCEVs (using clean H2) could be one of the solution to greatly reduce GHG and pollution together with electrification of cars, other vehicles, trucks, locomotives, lawn mowers, boats, pleasure units etc.

Ships, locomotives and large trucks could have on board converters to produce the H2 required.

Using biofuels would help with the CO2, making synthetics with solar/wind hydrogen and bio CO2 also. Sequester fossil CO2, use it twice to reduce emissions.