The Chevrolet Colorado ZH2, the extreme off-road-capable fuel-cell-powered electric vehicle from General Motors, made its debut at the fall meeting of the Association of the United States Army (AUSA). (Earlier post.)

Standing more than 6½ feet tall and more than seven feet wide, the Colorado ZH2 was built on a stretched midsize pickup chassis. Reinforced inside and out, the ZH2 rides on 37-inch tires and a specially modified suspension that helps the vehicle climb over and descend all manner of terrain. The US Army will test the Colorado ZH2 in extreme field conditions next year to determine the viability of hydrogen-powered vehicles on military missions. 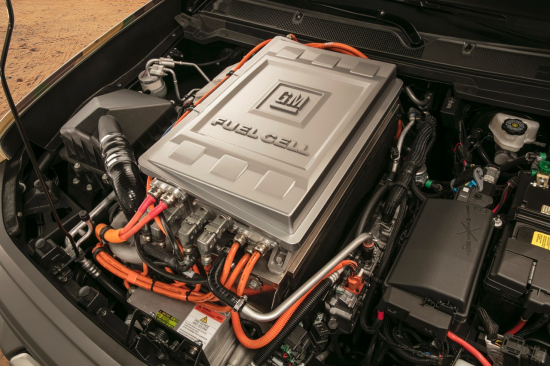 The Colorado ZH2 features a 25 kW Exportable Power Take-Off unit (EPTO) that allows the fuel cell to power activity away from the vehicle, such as remote locations where electric power may otherwise be unavailable.

GM and the US Army Tank Automotive Research, Development and Engineering Center (TARDEC) collaborated to develop the Colorado ZH2 from contract to concept in less than a year.

GM is leveraging a range of advanced technologies for multiple applications, including military.

The speed with which innovative ideas can be demonstrated and assessed is why relationships with industry are so important to the Army. Fuel cells have the potential to expand the capabilities of Army vehicles significantly through quiet operation, exportable power and solid torque performance, all advances that drove us to investigate this technology further.

The Army will evaluate the ZH2 fuel cell for:

GM and TARDEC have fuel cell development laboratories located 20 miles apart in southeast Michigan. Most of the Colorado ZH2 was assembled in GM’s Advanced Vehicle Integration facility in Warren. Calibration testing at GM’s Milford Proving Ground will continue into early 2017, when the vehicle will be turned over to the Army for a year of field testing.

The Colorado ZH2 is a terrific example of GM’s engineering and design skill in creating an off-road vehicle relevant to a range of potential users. Over the next year, we expect to learn from the Army the limits of what a fuel cell propulsion system can do when really put to the test.

The Colorado ZH2 contract is GM’s second vehicle development with a US military branch announced this year. In June, the US Navy unveiled a GM fuel cell-powered Unmanned Undersea Vehicle (UUV) that is currently in pool testing before eventual deployment. The UUV leverages GM fuel cell technology common with the Colorado ZH2, demonstrating the flexibility to power a range of mobile and stationary devices. (Earlier post.)

Wonder how soon will IS/ISIL/DAECH replace some of their Toyota pick-ups with those.

They could produce the H2 with electrolysis and solar panels,
then use the O2 produced for M.A.S.H. units.

Finally the true differentiator from batteries
Off road and mountain climbing. Chevy trucks on Sunday
football may the next built tough feature.

Well, seeing how the military may pay $70 per gal of fuel currently. Fuel cells can come pretty cheap in comparison. Unlike petroleum from secure sources(thousands of miles away from the front), the navy could provide the H2 needed.

I can see nuclear powered vessels in the vicinity creating hydrogen. Or even floating solar or wind farms near conflict zones erected a less than 1000miles away far from conflict making a supply of hydrogen to use in the battle field.

The thing I wish all electric and hydrogen cars of the future had exportable power like this. For consumers 25Kw might be overkill, but 10kw would be nice. Think of how nice natural disaster and other phenomenon would be if people could use their investment to provide power and some clean water.

The one thing that would make hydrogen a disadvantage would be the number of large radiators needed to keep the water from boiling (though newer technologies can operate dryer and hotter) a few PEMs were listed on here a while back trying to change the standard.

I guess chevy uses the scoops to provide silent running. I bet it can get noisy when standing still, but its probably quieter equivalent ICEs.

its like anything though, it could use a bigger battery to cycle stack on less frequent to need less cooling.

If they wanted to they could reform JP fuels to hydrogen. It might be easier to hide the heat signature from a fuel cell than an ICE. They would get better mileage.

I do not understand why GM play with FC instead of making something real. Why not proliferating Voltec to military vehicles? In combination with solar panels or nuclear unit and creating microgrid technology could be perfect solution. Hydrogen looks something out of limits.
Bob Lutz making Via trucks - that would be something to look for army generals.