The average fuel economy (window-sticker value) of new vehicles sold in the US in September was 25.2 mpg (9.33 l/100 km)—down 0.1 mpg from the value for August, according to the latest monthly report from Dr. Michael Sivak and Brandon Schoettle at University of Michigan Transportation Research Institute (UMTRI) This decline likely reflects the increased proportion of light trucks among the vehicles sold, they suggested. The University of Michigan Eco-Driving Index (EDI)—an index that estimates the average monthly emissions of greenhouse gases generated by an individual U.S. driver—was 0.82 in July 2016, down 0.01 from the value for June 2016 (the lower the value the better). This value indicates that the average new-vehicle driver produced 18% lower emissions in July 2016 than in October 2007, but 4% higher emissions than the record low reached in both August 2014 and August 2015. 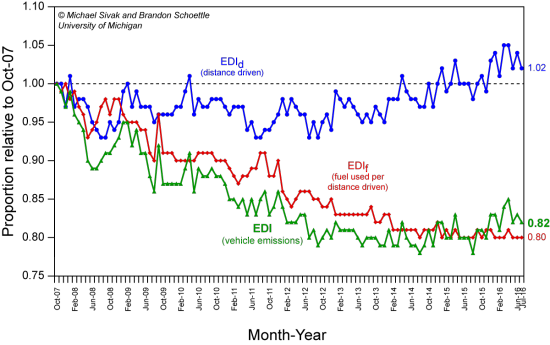 So much for all the claims by old automakers that their new generation ICEs has 10% to 50% energy savings from previous generation. We almost see it every day here at GCC. However, the reality in the real world is that nothing happens in terms of fuel efficiency. The reporting system is manipulated and crooked as most vividly shown by the VW’s diesel gate. We need zero emission vehicles like BEVs. They can’t be manipulated.

Henrik is correct on this one. However, Toyotas HEVs can be used at normal speed within the published consumption figures. Of course BEVs/FCEVs can do much better specially where clean electricity and clean H2 are available. Over 100 mpg PHEVs are also a very good compromise.

In USA, more $$$ (even if borrowed, all the way to $20+T) means bigger vehicles to impress the neighbours and more fuel consumption per mile/Km.

For those who do not believe in GHG and changing climate, the temperature in our northern region is 10C above average this week. What a pleasant Indian summer?

When gas goes to $4 again, we will see different numbers.

The fuel used per mile driven is at an all time low.
This is particularly impressive as fuel prices are also very low and have been so for about 2 years now.
So really, there is nothing to worry about (other than very low oil prices).
Zero emission vehicles have to get their electricity or h2 from somewhere else, and usually that involves some electricity from coal and gas, so they are not Zero emissions per mile driven.
(A Mk4 Prius is cleaner than most EVs (in terms of CO2 and other smokestack pollutants), except in France or Hydroland).

Yes, many countries will have to reduce GHG/pollution mainly from CPPs and ICEVs?

An unpopular progressive carbon tax plus an extra progressive fossil and bio fuel tax may be required.

Don't expect a carbon tax to push people to electric.
We have a ton of taxes on petrol and diesel in Europe and people went diesel and smaller cars, rather than electric (except in Norway).
We might see a switch if cars get above 40 KwH battery size, we may not.