Based on two wells drilled in early 2016, as well as 126 square miles of existing 3D seismic, Caelus estimates the oil in place under the current leasehold to be 6 billion barrels. Furthermore, the Smith Bay fan complex may contain upwards of 10 billion barrels of oil in place when the adjoining acreage is included. 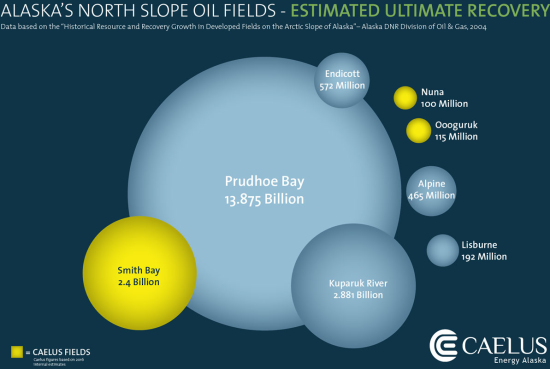 Due to the favorable fluids contained in the reservoir, Caelus expects to achieve recovery factors in the range of 30-40%. Additional drilling and seismic should improve estimates of oil in place via delineation of undrilled fan lobes and channel complexes imaged on the original 3D seismic.

The Smith Bay development has the potential to provide 200,000 barrels per day of light, highly mobile oil, which would both increase Trans-Alaska Pipeline System (TAPS) throughput volumes and reduce the average viscosity of oil in the pipeline, extending its long term viability.

This discovery could be really exciting for the State of Alaska. It has the size and scale to play a meaningful role in sustaining the Alaskan oil business over the next three or four decades. Fiscal stability going forward is critical for a project of this magnitude. Without the state tax credit programs, none of this would’ve happened, and I’m not sure Caelus would’ve come to explore in Alaska. We’re proof that the credit programs work.

The two exploration wells, Caelus-Tulimaniq #1 (“CT-1”) and step-out Caelus-Tulimaniq #2 (“CT-2”), targeted a large Brookian submarine fan complex spanning more than 300 square miles. The fan was successfully drilled and logged in both wells, encountering an extension of the accumulation 5.25 miles northwest of the CT-1 discovery at the CT-2 location.

Gross hydrocarbon columns in excess of 1,000 feet were encountered in each well; with CT-1 and CT-2 logging 183 and 223 feet of net pay, respectively. Neither well was flow tested due to seasonal time constraints, but extensive sidewall coring and subsequent lab analyses confirm the presence of reservoir-quality sandstones containing light oil ranging from 40-45 degree API gravity.

Caelus is currently planning an appraisal, program which will include drilling an additional appraisal well and acquiring a new 3D seismic survey over outboard acreage. The appraisal program will enable Caelus to confirm reservoir continuity, optimize future drilling locations, and ultimately increase reserves. In parallel, Caelus is studying and planning the facilities’ build-out which will process and transport the oil to TAPS.

Caelus Energy Alaska, LLC is operator of the Oooguruk Unit on Alaska’s North Slope, and also holds a large portfolio of exploration acreage across the ANS region.

Take that oil, invade the market with maximum production and i will buy my gas that i need to burn in my 2005 neon at a better price than actual gasoline on the market. Also stop electric car subsidies that kill the taxpayers and let these crooked leftists pay themself their electric gizmos. It's also important to elect trump because he said that climate change is natural and that the ones believing in that crap just want to make a lot of fraud money.

How can somebody be so wrong?

I wonder if there's a way to get him banned for spreading lies and misinformation?

Surprise a trump follower could even find this site yet alone even understand gelogic profiles of north slope Alaska. The oil is too expensive to drill out of Alaska .
Two bore holes does not constitute oil reserve in billions .

Saudii Arabia has been lying for decades about the gwar oilfield .
When most fields are only 30% recoverable they have have depleted this main oil field long time over pumping .
Same happened to prudhoe bay at the millinium.

I also clearly said to commercialise a more efficient hybrid car that work with a gasoline ice and air hybrid tanks that are heated and pressurized by waste exhaust pressure and heat Easilly over 100 mpg at lower cost than inneficient electric hybrid.

Opinions are everywhere, that does not make them facts.

It is a fact that ARTEMIS built a hydraulic hybrid transmission that can reduce fuel consumption of vehicles to half in city driving.

It is also a fact that ZEBRA batteries have similar capacity per weight to many lithium battery types and have been tested in many automobiles and are much more efficient than using hydrogen produced from electricity in fuel cells.

It is my opinion that natural gas should be converted to gasoline and diesel for the use of vehicles that are now usual and that this can provide for fuel costing about 2 dollars at the pump or less, and that the US should have already built sufficient of these factories where ever natural gas pipes cross railroad tracks to supply the entire needs of all US vehicles to eliminate the drain of US funds abroad for fuels. When natural gas gets too expensive then gas from coal can be substituted for natural gas. Ethanol and methanol might also be produced by such factories.

It is my opinion that ZEBRA type batteries should be used in small electric vehicles for local journeys. These vehicles must have an ethanol or gasoline powered tiny engine generator only for a rare use like a spare tire for just getting home or to a service facility. Electricity can be generated at about one cent per kilowatt hour which can run a car like a prius for about five miles. Local costs are much higher because they include among other costs epigen price gouging invented by ENRON. ..HG..