BMW has unveiled the seventh generation of the BMW 5 Series Sedan, which will go on-sale in markets around the world in February 2017. The 5 Series has been a major hit for BMW, selling 7.6 million units since its first introduction in 1972. Further enhanced dynamics, assistance systems, connectivity and a new and innovative operating system are important new features in the latest generation, in addition to the new, more efficient powertrains.

Other new engines to join the lineup after launch will be a 140 kW/190 hp four-cylinder diesel engine in the BMW 520d EfficientDynamics Edition with eight-speed Steptronic. Its CO2 emissions of 102 g/km are the lowest in the sedan’s class (average fuel consumption: 3.9 l/100 km. 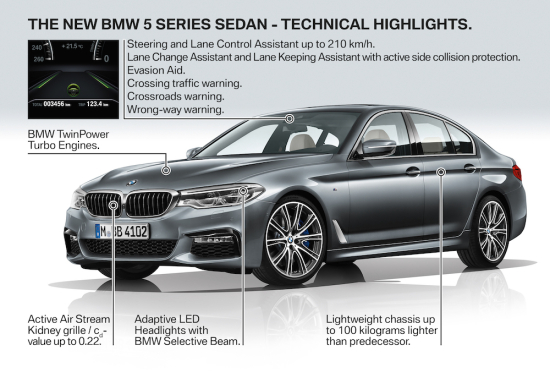 The diesel exhaust systems operate using BMW BluePerformance technology, which combines close-coupled particulate filters and oxidation catalysts with a NOx storage catalyst. Exhaust gas aftertreatment in all diesel models is performed with the aid of SCR technology, including a water-cooled metering module for the AdBlue fluid, which serves to cut nitrogen oxide emissions still further. AdBlue can now also be replenished from special pumps at filling stations, allowing the reservoir to be topped up more quickly and conveniently.

SYNTAK capsule for engine and transmission. BMW has used the SYNTAK (Synergy Thermoacoustic Capsule) technology in the new BMW 5 Series to reduce powertrain noise. The lightweight soundproofing materials encapsulating the engine and transmission team up with a series of inventive touches to lower volume levels, while also producing considerable weight and fuel savings. SYNTAK also improves the powertrain’s heat retention, which in turn leads to reduced fuel consumption.

All the engines available at launch can link up with BMW xDrive intelligent all-wheel drive. BMW xDrive counteracts oversteer and understeer effectively and increases the car’s dynamic handling abilities when turning into corners or eagerly powering out of tight hairpin bends.

The transfer case in the new BMW 5 Series also works more efficiently, helping to keep fuel consumption to a minimum. For the first time, BMW xDrive can be combined with Integral Active Steering as well as lowered sports suspension.

It is interlinked with the Navigation system Professional, enabling it to detect braking situations in advance—such as when entering built-up areas, speed limit zones, corners and filter lanes—and prepare the drive system accordingly. Such measures are accompanied by intelligently controlled energy and climate management, with the active air flap system in the new BMW 5 Series allowing even more variable control of the cooling air for the engine, brakes and air conditioning to suit the situation. Aside from its aerodynamic benefits, the system also shortens the engine’s warm-up phase and makes sure that heat is retained for longer after the engine has been switched off. 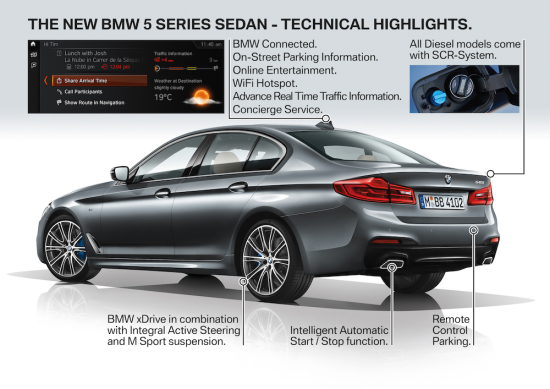 The Auto Start Stop function is another example of the advanced degree of connectivity in the new BMW 5 Series, as it uses information from the navigation system, stereo camera and radar to prevent the engine from being switched off in situations where that would be inefficient or unwarranted, such as at roundabouts or T-junctions. The result is a clearly noticeable increase in driving comfort in real-world use. The coasting function also does its bit to lower fuel consumption, particularly when travelling at higher speeds.

The new system is fast-acting and precise, is lighter overall in weight and is much more frugal in its energy consumption. As well enhancing the driving dynamics of the business sedan, Dynamic Drive also improves comfort in straight-line driving, by actively countering bump disturbances affecting only one side of the car. By automatically adjusting to a wide range of driving conditions, Adaptive Drive enhances handling safety and stability, and provides excellent suspension comfort.

Assistance systems and the move to automated driving. The new BMW 5 Series is fitted as standard with a stereo camera, which teams up with optional radar and ultrasound sensors to monitor the area around the car. New features in the BMW 5 Series alongside the evasion aid and Crossing traffic warning are the Lane Change Assistant and Lane keeping assistant with active side collision protection. The latter keeps an eye on the lane markings and the area around the car, and actively helps the driver to avoid looming collisions by applying corrective steering inputs.

The BMW 5 Series also takes another step towards automated driving with extended functions for the optional Active Cruise Control (ACC) system and Steering and Lane keeping assistant. These include adoption of speed restrictions, which the optional Intelligent Speed Assist communicates to the cruise control system (the driver can adjust this figure by +/– 15 km/h / 9 mph). From rest to 210 km/h (130 mph), the car can relieve the driver of acceleration, braking and steering duties, as desired. The intelligent Auto Start Stop function now adjusts its responses to the route and traffic conditions and therefore offers even greater driving comfort.

Latest generation iDrive. The new BMW 5 Series is equipped with the latest-generation iDrive system. In top specification, it displays navigation, telephone and entertainment features, plus vehicle functions, on a high-resolution 10.25-inch screen. The system can be operated using the iDrive Controller, by voice command or gestures, or by touching the display controls directly, as the driver wishes. The large, tile-style panels can be arranged as desired and show the content of the underlying menus in constantly updated form.

Gesture control for key functions was premiered last year in the BMW 7 Series, and the BMW 5 Series now features the latest version of this system.

BMW gesture control offers a particularly intuitive and easy way of operating commonly used infotainment system and telephone functions. All that is needed are simple movements of the hand or fingers, which are detected by a 3D sensor in the vicinity of the center console and translated into commands: pointing at the screen with the index finger is all it takes to accept a phone call, for instance, while a swiping motion with the hand rejects it. The swiping action can also be used to open submenus.

Tracing a circle with the index finger adjusts the audio system’s volume, and the driver can pull their thumb and index finger away from the navigation map towards them to zoom in on that section of the map. The two-finger victory sign can be used to carry out an individually selectable command, such as instructing the navigation system to start route guidance to the home address or skipping to the next track in a playlist.

More functions than ever before can be controlled using gestures in the new BMW 5 Series Sedan. The voice dialogue system can also be started and terminated in this way, for instance, and the navigation system option “Resume route guidance” confirmed or declined.

The latest-generation full-color BMW Head-Up Display has a projection surface that is 70% larger (800 x 400 pixels) than before and displays traffic signs, telephone listings, radio stations, music tracks, navigation instructions and warnings from the assistance systems. 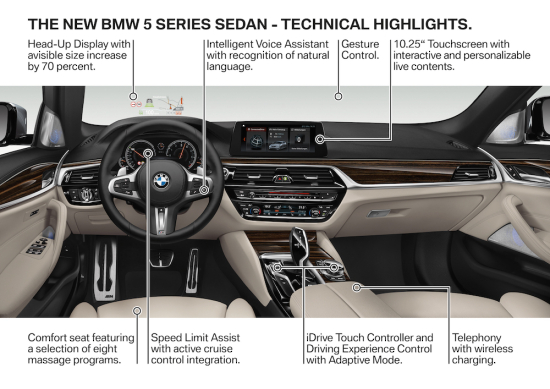 The optional Remote Parking system allows the BMW 5 Series Sedan to be maneuvered into even the tightest parking spaces remotely using the car key.

Smartphone integration has been further improved—from Apple CarPlay (which, in a first for a carmaker, has been incorporated fully wirelessly), to inductive phone charging and the WiFi hotspot for up to ten devices.

BMW Connected, the personal digital mobility assistant from BMW, has been available in Europe since July 2016. The next development stage of the system, complete with additional services, is set to be introduced with the new BMW 5 Series. BMW Connected Onboard gives drivers an overview of their mobility-related information. Relevant content such as the upcoming navigation destinations and estimated arrival time recorded in their personal mobility agenda are transferred seamlessly into the car from their smartphone and displayed on the personalized screen. Remote 3D View allows drivers to call up three-dimensional views of the area around their car on their smartphone while on the move.

Lightweighting. The BMW EfficientLightweight concept has been rigorously applied throughout the new BMW 5 Series Sedan. Using an intelligent multi-material mix consisting of aluminum, high-tensile steels and magnesium, up to 100 kilograms has been shaved off the weight of the previous model, while body strength and torsional stiffness have been increased.

A low center of gravity, a perfectly balanced axle load ratio and a further reduction in unsprung masses have benefits for both dynamics and comfort. The acoustics package too, with engine encapsulation and the use of super-absorbers, has been designed for reduced weight, while also setting new standards in interior noise reduction.

Large load-bearing members in the new BMW 5 Series Sedan, and strategic use of high- and ultra-high-strength steels in the roof, side members and rear, give the body high structural strength. The hood, trunk lid, engine cross- member, rear side-members, roof and doors are constructed from aluminum.

The doors, with laser-cut outer panelling, have an aluminum shell construction, which maximizes the weight-reducing benefits of this material when used in combination with state-of-the-art production technologies. At only around six kilograms (including the hinges and door brake), these doors are currently the lightest in this segment.

The use of hot-stamped steels, aluminum alloys and multi-phase steels in the safety passenger cell provides high rigidity, for the best possible passive safety and low weight. The cast magnesium instrument panel support is up to two kilograms lighter than the steel version used on the previous model.

Big weight savings have also been achieved for the chassis components. To take just one of many examples, the integration of the electric parking brake into the rear brake calipers brings weight savings of approximately three kilograms. Altogether, the weight savings on the brakes, wheels and tyres add up to a reduction of more than nine kilograms in unsprung mass, with noticeable benefits for dynamics and ride comfort.

For the first time, the trunk lid of the BMW 5 Series Sedan is made entirely of aluminum, bringing a weight saving of 4.2 kilograms. And a further half kilogram has been shed thanks to use of the natural fiber kenaf in the inner lining of the boot lid. Kenaf’s high recyclability means it is also has a high sustainability factor and is very eco-friendly.

Aerodynamics. The BMW engineers carried out a large number of detail optimizations to reduce the drag coefficient of the new BMW 5 Series Sedan by 10% compared to its predecessor and set a new sedan benchmark of Cd = 0.22.

All new BMW 5 Series models will now come with active air flap control for the radiator. This system opens the louvres in the kidney grille elements and lower air intakes when more cooling air is required, but otherwise keeps them closed to optimise aerodynamic efficiency.

The Air Curtains in the front apron team up with Air Breathers to cut air turbulence in the wheel arches significantly and channel the onrushing air effectively as the car pushes through it. A further improvement in the drag coefficient comes courtesy of optimized trim and airflow-channelling elements fitted across the whole of the underbody; these provide a considerable degree of underbody sealing. Another consequence of these measures is a reduction in lift, which enhances dynamics.

It will be a brilliant car - every mid executive will want one.
It is great balance between cost and function, way cheaper than a 7 series, bigger than a 3 series for not much extra cost.
A cd of 0.22 is quite something (for high speed cruising).
I suppose we should consider it a mark of progress that the 530i has a 2 litre engine.