From the end of 2016, diesel variants of the Renault Scénic and Grand Scénic models will be equipped with Continental’s 48-volt hybrid drive—the first application of the 48V “Hybrid Assist” in production vehicles.

The first production solution combines an efficient, water-cooled induction motor with an integrated inverter. The electric motor transmits power via a belt drive directly to the crankshaft of the combustion engine—an arrangement referred to as “P0 topology.” Further production ramp-ups are soon to be set in motion on the basis of a modular system for 48-volt drives.

The efficiency of a 48-volt system is largely dependent on the amount of drive and recovery output available in continuous operation. As a result, Continental has chosen to employ the water-cooled induction motor that can be connected directly to the engine’s cooling circuit. This makes it possible to assemble a machine that, depending on the version, can continuously provide an output of 6 kW and torque of 60 N·m, all in the installation space of a conventional starter alternator. Using a belt drive means that up to 150 N·m can be transmitted to the crankshaft.

Within the modular system, only the length of the motor changes the power. The inverter, based on a metal-oxide-semiconductor field-effect transistor (MOSFET), is integrated in the housing lid, which saves space. The modular system from Continental also includes a DC/DC converter, which enables the 48-volt system to be connected to the vehicle’s on-board power supply. This makes it possible to use some of the energy stored in the lithium-ion battery to stabilize the on-board power supply as well.

The technology is a particularly cost-efficient solution to reduce fuel consumption and exhaust emissions.

Simple adaptation to existing powertrain designs is a major benefit of the P0 concept that Continental has pursued. It enables the load point of the combustion engine to be shifted. The fuel savings demonstrated in test vehicles are considerable, with a figure of 13% in the New European Driving Cycle. In real-world use—especially in cities—the savings are even higher thanks to the greater share of driving spent in energy recuperation phases, and can reach up to 21%, according to Continental.

This is helped by the fact that the combustion engine can be switched off when the vehicle approaches traffic lights, starting at speeds below 20 km/h (12.4 mph). The combustion engine is always started with the 48-volt drive within just 0.2 seconds—a conventional starter needs roughly twice as much time.

When the 48-volt drive is combined with a diesel engine as in its first production application, there is an additional effect: the nitrogen oxide emissions produced during acceleration from low engine speeds fall by up to 10%, as some of the necessary torque is generated via the electric motor.

With the mild-hybrid system, Renault is aiming for combined fuel consumption of 3.5 liters of diesel per 100 km (67 mpg US). They are also aiming to reduce the new Scénic’s CO2 emissions to 92 grams per kilometer—a new CO2 benchmark in this vehicle class.

The 48-volt solution from Continental is relatively easy to combine with preexisting internal combustion engines, as it does not require any more room than a conventional starter generator. This is due to the high power to size ratio of the electric motor, which does not contain rare earth materials. This is achieved by water cooling of the stator and the high efficiency of the induction motor.

To save space, the inverter, which is needed to convert direct current stored in the battery into alternating current required for operation, is integrated in the housing lid of the motor. The ready-to-install 48-volt drive is manufactured at the Continental plant in Nuremberg, which already specializes in complex electronic modules, such as those used for automatic transmissions.

Since 2013, Continental engineers have been working together with Renault on a hybrid drive, which is so cost-efficient to produce that it becomes an appealing option for mid-size vehicles. To achieve this, the development partners have used low-voltage hybrid technology, which operates at 48 volts. This is in contrast with the considerably more expensive high-voltage technology, which operates at between 300 and 400 volts and is usually used in hybrid vehicles.

We are proud that we were able to secure Renault as the first customer for our innovative 48-volt drive. Other production launches for both diesel and gasoline vehicles are in the pipeline for Europe and other markets including China and North America.

According to Continental, the market for 48-volt drives will experience significant growth in the coming years. Rudolf Stark, Head of the Hybrid Electric Vehicle Business Unit, says that in 2025, approximately one in five new vehicles across the world will be equipped with a 48-volt drive.

Even after the start of production, Continental will continue to develop the 48-volt technology. As well as optimizing all components for the P0 arrangement, the focus will be on another system configuration—a P2 arrangement, with the electric motor located between the engine and the transmission. It can therefore be operated entirely independently of the combustion engine, which means that electric driving at speeds of temporarily up to 50 km/h (31 mph) is possible with a 48-volt drive as well. 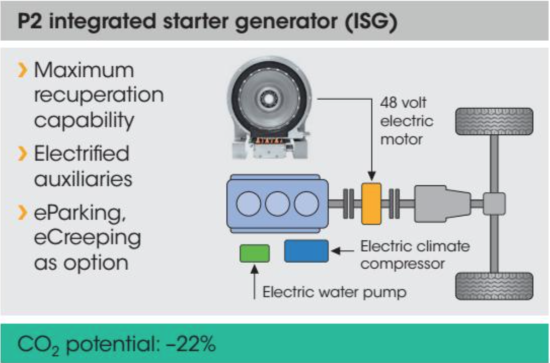 Such a solution, which enables fuel savings of up to 25% in concert with additional efficiency-boosting measures, was presented for the first time by Continental and Schaeffler at the 2016 Vienna Motor Symposium.

Diesel does not need the torque down low, but this reduces NOX.

6 kW of continuous electric power in a standard alternator package is a big enabler of other things as well.  Electric power steering and electric A/C are two loads which can stop dragging on the crankshaft.

Go to the P2 configuration, add an electric water pump and the front of the engine is suddenly belt-free, making it shorter and easier to package.

Oh I would love to see GMC or Dodge put this system on their half tons.

For some reason I'm unable to find the years-old article about the Dodge Ram Contractor Special here at GCC.

As an EE I recall that the safety limit used to be 42v. Now its 48v. But why can't you use a +48v feed and a -48v feed similar to the US standard household power system w/240v/120v except that it is DC. You have what is essentially a +120v feed and a -120v feed throughout the house, but 240v at the stove/dryer/ac units. This technique gets you up to 96v at the MG set with increased power and still only 48v to ground. It requires a third power wire, or maybe a double cable feed to keep the two feeds separate. Doesn't that satisfy the safety issue? It gives a huge power advantage!

William G Irwin. I don't see the comparison. For such a single phase DC-AC conversion, the relative DC neutral tap before conversion would be 48v with 0v and 96v on either end. I am not an expert on inverter technology for such a conversion. The system is still 96 volts DC.

Single Phase street transformers reduce a Primary 0 neutral/ground to 2K/4k single phase on the Input side to a Secondary single phase 240V out taps peak-to-peak where the Neutral is the Center Tap on the Secondary winding. On either end of the secondary, each of the 2 120v taps is single phase and 180 degrees out of phase the other.

If they could get to P2 with eCreep, it would be fantastic.
Where I live there is nose to tail traffic every morning, >50% diesel. If they could creep along on electric, it would greatly improve air quality.

Price will be problematic, 130 HP diesel with EDC is already in the Toyota 1.8 full hybrid price range, no matter how cheap may this 48V sistem be it will be more expensive. Some will say that it's better, but will show after couple of years, because to me this just looks like more complexity on already complex drivetrain (diesel, double clutch trans).

If it is non turbo I would agree.

William G Irwin. Telecom systems have used exactly what you are suggesting. The safety reg's are focused on faults to GND, but the power can be pulled between plus and minus voltages. 96V is way better than 48V. But as you pointed out, you need an extra wire. For a remote powered telecom system we're talking about 22 gauge wire. But with fat cables for a car that may be a deal breaker.

The P2 system ought to be the new normal for future cars. ALL ICE cars could benefit from this.

But the P0 can be retrofitted, provided space can be found for the battery. Most likely, the retrofit should be done by the car maker as part of a model update in order to be fully integrated with the engine and gearbox control software.

On my 9-mile commute I pass 3-4 hills of only 100 ft height and gradients >6%, where the transmission always has to downshift. Oh, how I would love to have an e-motor to give just that little extra over the top of the hill and then coast (engine off) with recuperation going downhill to avoid overspeeding (yes, the cops figured out where to hide with their lasers).

When you drive the same route day in and day out, you learn to optimize your driving style to that route (if traffic permits, and you are the type of person who cares about that). I see a tremendous potential for a mild-hybrid system on my commute to save probably 30-40% with predictive and optimized usage.

Obviously, a PHEV og BEV would be even better for this particular commute but we may not be ready as a one-car family to deal with the restricted range of a BEV or the high cost of a PHEV (Golf GTE).

Hopefully, the 48V mild-hybrid system could be cheap enough to become completely ubiquitous and above all, save a tremendous amount of idling in heavy traffic.

1. 48V systems won't be available in US for at least 2 years
2. first drivetrain combinations will be with already expensive engines and DCT transmissions, this won't save you money, but it will get you a better (but more complex) drivetrain.
2. 236 lb.-ft. is of course more than enough, problem is when you put your foot down in 2nd gear below 1,500 rpm, you won't see this torque, you have to wait for at least a second to get the turbo spinning. Yes turbo lag is something every one is saying it's solved, but it's far from solved, especially on downsized turbo engine and city stop and go traffic.

I would say replace the turbo with a motor, good response and less NOx.

For a P2 solution, I totally agree with SJC. An e-motor may not be able to supply as much top-end power as a turbo but still achieve better acceleration without having to allow 250 km/h top speed to achieve <7 sec 0-100 km/h performance.

Having browsed through the 48V topic, it strikes me how many auto-industry sub-suppliers that are show-casing sales-ready 48V mild-hybrid parts. This would be unlikely if auto-makers were not recipient to the idea.

Furthermore, the names P0 for beefed-up starter motor/generator and P2 for e-motor-between clutch and gearbox have been used by at least two component manufacturers, indicating some industry standardization; another indication of gearing up to be production ready.

48 V electrical systems have been bandied about for nigh unto 15 years, maybe longer.  All of this is to run more powerful accessories (PS pumps, A/C compressors) and reduce parasitic losses from belt-driven accessories.  It would be a surprise if there WASN'T some degree of standardization.

One of the issues is engine-off drain.  It's marginally acceptable to run a module's key-off power consumption on 12 volts using a linear regulator.  It's very different to do it from 42 VDC or more, and the last time I saw this there was talk about switching regulators to slash the current draw and not convert so much precious stored energy into waste heat.