In Europe, Ford is trialing its implementation of “Green Light Optimal Speed Advisory” (GLOSA) technology, which uses information on traffic light timings from a roadside unit to display to the driver the best speed to travel to get a green light.

GLOSA applications have been of prominent interest for intelligent transportation system (ITS) and connected vehicle research for a number of years due to the fairly obvious benefits. For example, a 2011 study by Katsaros et al. posited that implementation of a GLOSA could reduce both fuel consumption and congestion.

… projects have investigated the impacts on fuel efficiency when using wireless communications between vehicles (V2V) or vehicle-to-infrastructure (V2I) employing different algorithms to smoothly slow down at a red traffic light or to reach it at the next green phase. Depending on the used consumption models, different results can be observed.

… This paper aims to implement a GLOSA system to reduce traffic congestion by decreasing the average stop time behind traffic lights while reducing fuel consumption and CO2 emissions. The GLOSA application provides the advantage of timely and accurate information about traffic lights cycles and traffic lights position information through infrastructure-to-vehicle (I2V) communication, and provides drivers with speed advice guiding them with a more constant speed and with less stopping time through traffic lights. The main challenges in achieving this include the modelling of the vehicle traffic, the communications between traffic lights and vehicles and finally the driver’s behaviour.

Ford is testing the GLOSA app as it helps to demonstrate the benefits of connected cars for UK Autodrive—the nation’s largest self-driving and connected car trial. 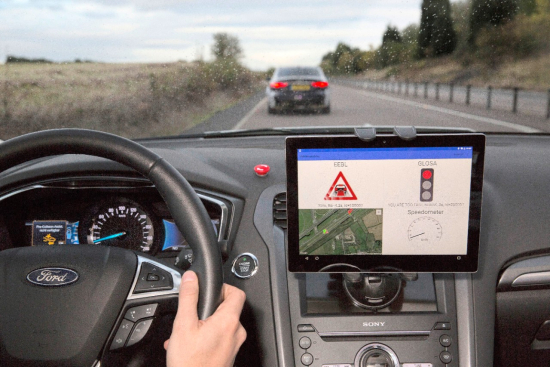 There’s not much worse after a long day than to hit one red light after another on the drive home, and be forced to stop and start again at every junction. Enabling drivers to ‘ride the green wave’ also means a smoother, continuous journey that helps to improve the flow of traffic and provide significant reductions in carbon dioxide emissions and fuel consumption.

The Mondeo Hybrid cars provided by Ford are also trialing Emergency Electronic Brake Lights, which warn when a vehicle up ahead suddenly brakes hard—even if the incident occurs out-of-sight—up to a distance of 500 meters.

Technologies that will be trialed next year also warn drivers when another vehicle is blocking the junction ahead; when an ambulance, police car or fire truck is approaching; and prioritizes vehicles arriving at intersections without traffic signs or traffic lights.

Trials are taking place on both public roads and closed circuits in Milton Keynes and Coventry during the next two years.