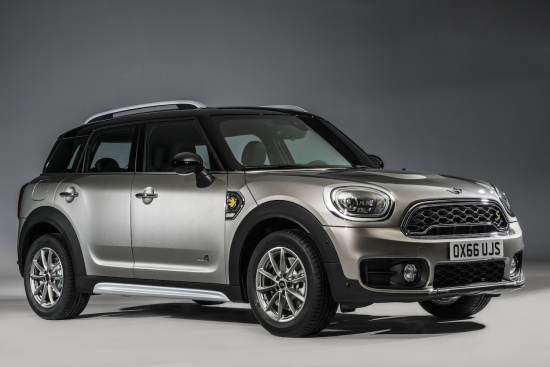 MINI Cooper S E Countryman ALL4 combines the space and practicality of the largest model in the MINI range with the sustainability of BMW Group eDrive technology and an electrified all-wheel drive system. The front wheels are powered by the combustion engine; the rear wheels by the electric motor. MINI Cooper S E Countryman ALL4 is able to run on electricity alone not just in urban traffic, but also at a top speed of 78 mph (126 km/h) and with a range of up to 25 miles (40 km).

The plug-in hybrid concept perfectly matches the new MINI Countryman because it offers intelligent all-wheel drive as well as being able to run on electricity alone both in urban areas and over longer distances, too. This is unique in the segment.

The 1.5-liter 3-cylinder gasoline engine with MINI TwinPower Turbo Technology is a member of the latest generation of the BMW Group engines. The maximum torque of the engine is 220 N·m (162 lb-ft), which goes on stream at 1,250 rpm. In the MINI Cooper S E Countryman ALL4, the combustion engine is combined with a modified 6-speed Steptronic transmission which transfers its power to the front wheels.

The electric motor is housed under the luggage compartment floor. Designed according to the principle of a hybrid synchronous motor, the electric drive generates a maximum torque of 165 N·m (122 lb-ft) that is characteristically available directly from standing. In addition, it provides constant power delivery even in high engine speed ranges as well as a very high level of efficiency. The electric motor directs its power to the rear axle via a two-stage single-speed transmission.

The lithium-ion battery is positioned directly in front of the electric motor underneath the rear seat. It is made up of five modules, each comprising 16 battery cells, and like the electric motor it is produced at the Dingolfing plant, the BMW Group’s competence centre for eDrive technology. The high-voltage battery has a capacity of 7.6 kWh. Charging at a 240-volt socket takes 3 hours and 15 minutes.

The intelligent energy management system controlled by the power electronics of the plug-in hybrid system ensures that the interplay between the combustion engine and the electric motor is optimized for both driving fun and efficiency in all situations.

Two power units, four drive wheels. Only one of the two power units is used when the car is moving, while the other one can be additionally enabled at any time to optimize traction, ride stability and agility. The signal required for this purpose comes from the Dynamic Stability Control (DSC) unit, which permanently analyses both the situation on the road and the driver’s wishes.

The precisely controlled interaction achieved in the powering of the front wheels by the combustion engine and the rear wheels by the electric motor is the same as the principle that is applied in the BMW i8, only the other way around. 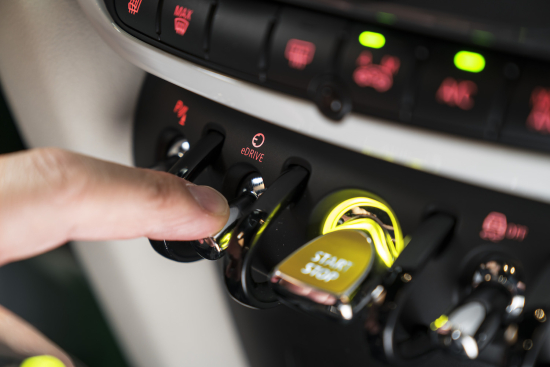 The driver can also use the eDrive toggle switch to choose between three operating modes:

If the MINI Cooper S E Countryman ALL4 is fitted with a navigation system and route guidance is activated, the anticipatory energy management system ensures that appropriate sections of the route are run on electric power alone. Taking into account the navigation data, the operating strategy of the hybrid system is geared towards drawing on the energy capacity of the high-voltage battery to maximum extent.

The special features of the cockpit include a yellow start/stop unit at the centre of the toggle switch panel and a performance display in the instrument cluster on the steering column. The MINI Cooper S E Countryman ALL4 comes as standard with the MINI Connected infotainment system featuring a 6.5-inch color screen in the central instrument. 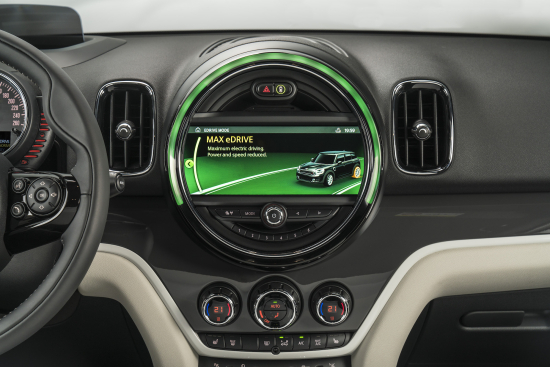 This displays information such as the charge state of the high- voltage battery and operating mode of the hybrid drive selected by eDrive toggle switch. In conjunction with the optional Technology Package Wired package including satellite navigation, operation is via a high-resolution 8.8-inch touchscreen with a new user interface and operating system.

We do not need more earth destroyers from the old automakers with combustion engines. They need to stop doing what they are doing and start focusing on making fully self-driving BEVs that are more affordable per mile driven than gassers because they are far more durable and cost pennies in electricity per mile. Do not worry about range and charge time. Make the BEVs fully self-driving and operate them as a transportation service and these two problems with BEVs are history.

Tesla will go online with such services somewhere on the planet during 2018 and have a global network offering driverless transportation services by millions of Tesla cars by 2020. Soon thereafter the old automakers that does not have the same kind of services will start to bankrupt as their conventional car sales will be in rapid and terminal decline.

The future looks great. It is pollution free and nearly free of traffic accidents and it does not need fossil fuels or bio fuels at all.

Henrik, people are still buying ICEVs because they satisfy their needs.  It still remains for PHEVs, let alone EVs, to displace the petroleum-burners in their roles of satisfying what people want.  That does not need to wait long... but it is still waiting.

Committed environmentalists and energy security advocates (I include myself in both camps) may accept the changes required in planning and logistics for 100 mile electric cars, but not everyone does. PHEVs solve that problem and can achieve 80-90% of the benefits of all-electric driving.

Once all ICEs are PHEVs and 200-300 mile EVs are widely available and inexpensive, the change to all-electric will probably be driven by consumer demand. I don't know many people who have PHEVs and BEVs and really want the NVH, maintenance and fuel costs associated with the ICE component. It's just a trade-off with the convenience of fast fueling on longer trips.

At this point, we have bigger fish to fry. Sea level rise in south Florida will soon make electing climate-change deniers untenable in that state.