Almost one in seven of the world’s children, 300 million, live in areas with the most toxic levels of outdoor air pollution—six or more times higher than international guidelines set by the UN’s World Health Organization (WHO)—according to a new UNICEF report.

The report, “Clear the Air for Children”, uses satellite imagery to show that some 2 billion children live in areas where outdoor air pollution, caused by factors such as vehicle emissions, heavy use of fossil fuels, dust and burning of waste, exceeds WHO minimum air quality guidelines. The findings come a week ahead of the COP 22 in Marrakesh, Morocco, where UNICEF is calling on world leaders to take urgent action to cut air pollution in their countries. 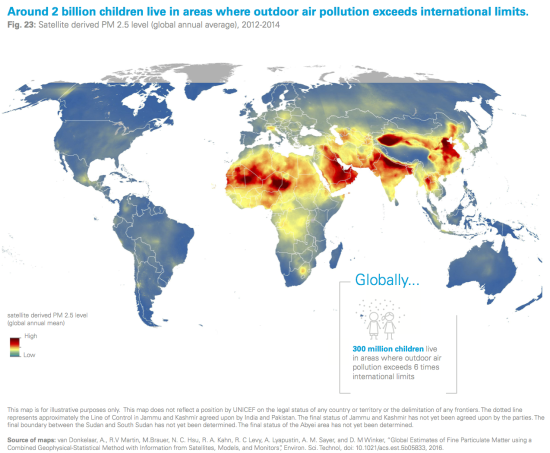 Air pollution is a major contributing factor in the deaths of around 600,000 children under five every year—and it threatens the lives and futures of millions more every day. Pollutants don’t only harm children’s developing lungs—they can actually cross the blood-brain barrier and permanently damage their developing brains—and, thus, their futures. No society can afford to ignore air pollution.

In the three countries with the highest child populations (India, China and Nigeria), the number of cars is likely to grow considerably in the coming decades, which will be particularly marked in Africa, and substantial too in South Asia. For comparison, if those countries were to have the same motorization rate per capita as the United States of America currently, the number of vehicles would increase by nearly 40 times for India and Nigeria, and 8 times for China. This also does not account for the growth in population over the coming decades. The imperative for green investments could not be stronger.

—“Clear the Air for Children”

The study also examines the heavy toll of indoor pollution, commonly caused by use of fuels like coal and wood for cooking and heating, which mostly affects children in low-income, rural areas.

Together, outdoor and indoor air pollution are directly linked to pneumonia and other respiratory diseases that account for almost one in 10 under-five deaths, making air pollution one of the leading dangers to children's health.

Children are more susceptible than adults to both indoor and outdoor air pollution as their lungs, brains and immune systems are still developing and their respiratory tracks are more permeable. Young children also breathe faster than adults, and take in more air relative to their body weight. The most disadvantaged, who already tend to have poorer health and inadequate access to health services, are the most vulnerable to the illnesses caused by polluted air.

This will work as intended and it will be inexpensive to enforce and monitor.

Having more electric cars is not going to solve much of the problem. Look at the map. Most of the problem is in Africa and south Asia. The problem is mostly caused by poor people burning wood and dung for heat and cooking. In India and other south Asian countries, some of the urban pollution is probably caused by small 2-stroke vehicles (tut-tuts). China has some vehicle pollution problems but burning coal for heat and power is a larger problem.

My longer term solution would be largely education and especially women's education which would go a long way to helping women have fewer children and improve the economic well being of the general population. Note that this is not China's problem. China's problem is more related to trying to grow the economy too fast which required cheap power.

Here is a link for the new movie 'Before Th Flood' It's free for two weeks before you must pay to view. Please pass it on:

This movie works well to educate people on the destruction of fossil fuels.

SD you may have a point about much air pollution from wood cooking in Africa and India. However in China, Russia, much of Europe and the Arab peninsula wood cooking barely exist apart for fun yet these are heavily polluted areas according to the map. Plus it is not just about air pollution but also about co2 emissions and only the burning of fossils creates that kind of pollution.

There is no way around it. We need to stop burning fossils and we should speed the process of going away from burning fossils up by using zero emission mandates on vehicles and power generation. By 2030 we can end the making of all new machines that use fossils or biomass that also causes air pollution. We do not need more time and the planet does not have more time if a catastrophic extinction event caused by out of control global warming should be prevented.

Hi Henrik,
Take a look at "under the dome" about pollution in china.

It only takes 100 of Tesla’s giga battery factories to transform the entire world to sustainable energy and BEV only transportation. We can build that before 2030 for sure. Just bring on the zero emission mandates and the old industries will be forced to make the transition they do not want to make on their own because sustainability is not on their profit and market share only agenda.

Teslarati has the story.

I think the problem is that they are burning fossil fuels with no pollution controls whatsoever.

If they (China and probably India) implemented the standards that they have, they would be OK.

Then all they have to worry about is CO2, but it is the "local" pollution that is currently killing people.

I am in favor of reducing the amount of fossil fuels that we burn with the eventual goal of eliminating the use of fossil fuels. However, that will not solve the problem in Africa. I am not completely sure of the source of the pollution in the middle east but it is probably related to burning off gases from the oil production. I am more puzzled by the plume that appears to come from Krgyzstan or Uzbekistan. Some of the problems may also be blowing dust. Anyway, more education and less poverty would help with many of these problems.