DOE awarding up to $80M for supercritical CO2 pilot plant

The US Department of Energy (DOE) is awarding up to $80 million for a six-year project to design, build, and operate a 10-MWe (megawatts electrical) supercritical carbon dioxide (sCO2) pilot plant test facility in San Antonio, TX. The project will be managed by a team led by the Gas Technology Institute (GTI), Southwest Research Institute (SwRI), and General Electric Global Research (GE-GR).

The new facility will support the future commercialization of sCO2 Brayton cycle energy conversion systems by testing and demonstrating the potential energy efficiency and cost benefits of this technology. Today the average efficiency of the US fleet of steam Rankine cycle power plants is in the lower 30% range. This new facility has the potential to demonstrate greater than 50% cycle efficiency. If successfully developed, the supercritical CO2 power cycles could provide significant efficiency gains in geothermal, coal, nuclear, and solar thermal power production.

Supercritical carbon dioxide is a fluid state of carbon dioxide where it is held at or above its critical temperature and critical pressure. Carbon dioxide usually behaves as a gas in air at standard temperature and pressure (STP), or as a solid called dry ice when frozen. If the temperature and pressure are both increased from STP to be at or above the critical point for carbon dioxide, it can adopt properties midway between a gas and a liquid. At this state, sCO2 can be used efficiently as the working fluid throughout the entire Brayton cycle, enabling a power plant to generate the same amount of electricity from less fuel when compared to traditional steam and water (Rankine cycle) systems commonly used today.

This, in turn, decreases CO2 emissions and operating costs. Furthermore, because s CO2 has a high-fluid density relative to steam, sCO2 power plants may be fitted with compact turbomachinery, which would help to reduce capital costs. 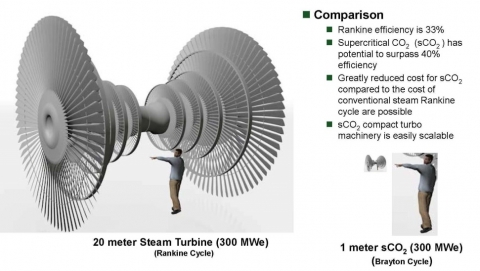 According to the DOE’s Supercritical Carbon Dioxide (sCO2) Technology Team, benefits of the sCO2 Brayton cycle include:

Supercritical CO2 power systems have the potential to improve the efficiency and reduce the size of future power plants significantly. Smaller size and increased efficiency can lead to lower costs and fewer greenhouse gas emissions.

—Franklin Orr, DOE’s Under Secretary for Science and Energy

Currently, no commercially-feasible sCO2 facility exists for high temperature and high-efficiency system testing. The 10-MWe test facility developed under the selected project will serve as an opportunity for industry and government to work together to develop and mature the sCO2 power cycles at the pilot-scale, bringing it one step closer to commercialization.

Supercritical CO2 is carbon dioxide that is above its critical temperature and pressure so that it is in a fluid state,

The information generated through this project has the potential to inform scale-ups for larger scale demonstrations in the future. While sCO2 technology has been proven in a lab setting, this pilot project will provide important data on potential challenges of operating it on a larger scale. It will also provide an opportunity to atest the performance of the system’s components when operated on a continuous and fully integrated basis.

The project is part of DOE’s sCO2 crosscutting initiative that includes the Offices of Fossil Energy, Energy Efficiency and Renewable Energy, and Nuclear Energy. This collaborative effort seeks to reduce the technical barriers and risks to commercializing the sCO2 power cycle, with a common goal of establishing a 10 MWe scale Supercritical Transformational Electric Power facility for evaluating the power cycle and component performance over a range of operating conditions.

I would have liked more information on the temperatures at various stages in the process.