The average fuel economy (window-sticker value) of new vehicles sold in the US in October was 24.8 mpg (9.48 l/100 km)—down 0.4 mpg from the value for September, according to the latest monthly report from Dr. Michael Sivak and Brandon Schoettle at University of Michigan Transportation Research Institute (UMTRI). This likely reflects both a continuing increase in the proportion of light trucks sold each month, as well as the recent calculation adjustments for window-sticker values implemented by the EPA for model year 2017, they suggested. 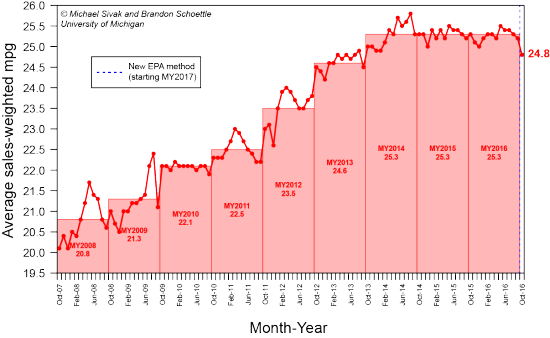 The University of Michigan Eco-Driving Index (EDI)—an index that estimates the average monthly emissions of greenhouse gases generated by an individual US driver—was 0.81 in August 2016, down 0.01 from the value for July 2016 (the lower the value the better). This value indicates that the average new-vehicle driver produced 19% lower emissions in August 2016 than in October 2007, but 3% higher emissions than the record low reached in both August 2014 and August 2015. 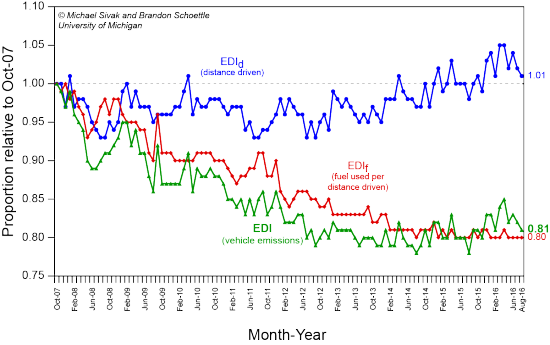 Negative progress so far for 2016 and no progress for the last 3 years.

Which way will it go, for the net 3 years, with the next President?

The progress will be yuge! we'll have the BEST progress.

Yes dursun....we will see XX millions of new high performance EVs on all roads & streets by 2020.