Global carbon emissions from burning fossil fuels did not grow in 2015 and are projected to rise only slightly in 2016, marking three years of almost no growth, according to researchers at the University of East Anglia (UEA) and the Global Carbon Project. Decreased use of coal in China is the main reason behind the 3-year slowdown.

The projected rise of only 0.2% for 2016 marks a clear break from the rapid emissions growth of 2.3% per year in the decade to 2013, with just 0.7% growth seen in 2014. The new data shows emissions growth remained below 1% despite GDP growth exceeding 3%. Detailed data were made available in the open-access data journal Earth System Science Data (ESSD). This is the fifth update of the global carbon budget published by ESSD in the living data format. 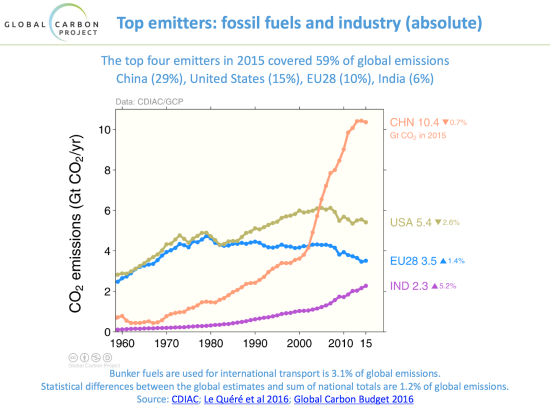 This third year of almost no growth in emissions is unprecedented at a time of strong economic growth. This is a great help for tackling climate change but it is not enough. Global emissions now need to decrease rapidly, not just stop growing.

—Corinne Le Quéré, Director of the Tyndall Centre at UEA, who led the data analysis

The projection for 2015 is based on available energy consumption data for China and the USA, as well as on forecast economic growth for the rest of the world. In 2014, renewable energy sources saw a record increase in capacity and their impact is on track to be even higher in 2015. 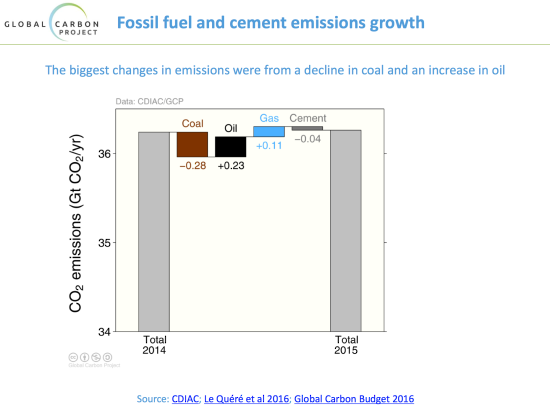 China—the biggest emitter of CO2 at 29%—saw emissions decrease by 0.7% in 2015, compared to growth of more than 5% per year the previous decade. A further reduction of 0.5% is projected for 2016, though with large uncertainties.

The US, the second-biggest emitter of CO2 at 15%, also reduced its coal use while increasing its oil and gas consumption and saw emissions decrease 2.6% last year. US emissions are projected to decrease by 1.7% in 2016. 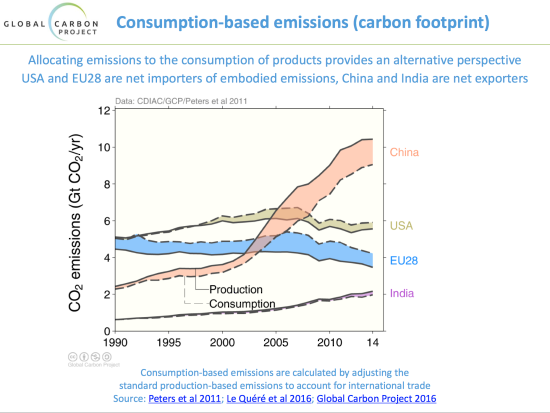 The EU’s 28 member states are the third largest emitter, with 10% of emissions. The EU’s CO2 emissions went up 1.4% in 2015, in contrast with longer term decreases.

India contributed 6.3% of all global CO2 emissions, with their emissions increasing 5.2% in 2015, continuing a period of strong growth.

Although the break in emissions rise ties in with the pledges by countries to decrease emissions until 2030, it falls short of the reductions needed to limit climate change well below 2 degrees Celsius.

The Global Carbon Budget analysis also shows that, in spite of a lack of growth in emissions, the growth in atmospheric CO2 concentration was a record-high in 2015, and could be a record again in 2016 due to weak carbon sinks.

Data and studies are research outputs of the Global Carbon Project, which has the scientific goal of developing a complete picture of the global carbon cycle, including both its biophysical and human dimensions together with the interactions and feedbacks between them.

The global warming will continue to accelerate unless we stop all CO2 emissions worldwide. Reducing growth in CO2 emissions does not help of cause. Cutting CO2 emissions in half from current levels is not stopping global warming either. We need zero CO2 emissions and we need it superfast or this planet will get a really huge and deep mass extinction event eradicating most life and species on this earth as it cannot adapt and survive the fast rising temperatures. It will be a very ugly and lifeless planet to leave for future generations.

To save the planet from this destruction we need zero emission mandates for automakers and we need to start making electric hyperloops to replace airplane traffic and shipping. We also need to make CO2 free cement and we should redo agriculture so that it does not produce a lot of CO2 and methane emitting products. Nothing of this is happening in any significant scale and the global agreement on greenhouse gasses is not working remotely either. It is much too little to slow to have any effect.

The people who are behind the destruction of our planet should be targeted politically by a super aggressive campaign calling them mass murderers and killers. This is what they are and they need to be reminded of it all the time so they might start thinking differently and work actively toward solutions that can make their industries 100% sustainable. Legal action should also be launched in order to try to convict cheaters on air pollution regulation for indirect mass murder. The current strategy by “pro-life-on-earth-people” of diplomacy and politeness is a complete failure. It needs to be far more aggressive IMO but not violent of cause.

Calling people mass murderers won't work any better than calling Trump a misogynist. Many people have a religious belief that global warming cannot be man's fault. What is needed is carbon sequestering -- negative addition to the atmosphere, not zero addition. We could put carbon back in the soil, and/or produce composite materials from recyclables. But those will have to be economically competitive. Which probably means a carbon tax. I don't see that coming in time to save us.

Our little Euro/NAmerican peephole on the world sadly has a very narrow field of view.

China has just announced that if everything works out they way they hope, growth in Coal-powered electrical capacity is nonetheless "projected to be stronger than previously expected.”

Well, since you asked: a little under 200GW more coal-fired generation capacity over the next four years. That's if China can manage to structure the grid expansion and power increases without the ADDITIONAL 150GW coal capacity currently in the pipeline. Yeah: it could be over 300GW more.

You could add
25-30odd GW permitted and in various phases of construction in India (assuming the usual gigantic delays and cancellations that take 70% of the projects out of the running -- plans actually say about 75GW)
20GW in Turkey
40GW or more between Vietnam, SKorea and Indonesia
etc. (and all these are conservative numbers, hoping that the rate of Natural Gas adoption renewable project growth can be sustained)

The US's remaining Coal-fired capacity of 275GW or so could be completely eliminated by 2020 and not replaced by ANY fossil fuels and the world's coal emissions will continue to rise.

The concept of a $25-50B hyperloop project in CA making any difference to this momentum is hilarious.

You may see nearly 200 GW of renewable energy be build for 2016. So we are getting there. I have little faith in governments actually creating policies so solve global warming. They are paid by industry lobby groups so nothing will happen that way. My faith is with technological progress life driverless vehicles that will make BEVs more evonomic than gassers per mile driven very soon. Also wind and solar power will drop further in price making coal gas and fission nuclear obsolete.

Maybe the hyperloop will not work. But we have not yet tried so we don’t know. We should try because it appears to work on paper. It is supersonic, noise and pollution free and it uses less energy than the energy from solar panels on the top of the hyperloop tubes. It also go from city center to city center. Unlike airports that needs to be far away from city centers.

Food for feeding animals should be made industrially in growth tanks and not on open fields that consume too much space. Food grown this way could also be used to balance renewable power intermittencies. We can do a lot of things if we get rid of the old naysayers in the boardrooms who have forgotten how innovative humans are when given the chance to innovate.

Ridiculous study . There is a lot of co2 emissions that are not caused by humans like forest fires, tree leaves, oceans, etc. It's completely natural and it is the sun going hotter or cooler.

Plants / trees do not emit CO2 they absorb it. Dummy. Do something your IQ is good for like flipping burger beef on the grill.

Pressure from the masses (survivors) has started to effectively delay (block) oil pipelines extension and the movement could do the same for new-old CPPs in the very near future.

Canada's (any many other countries') last CPPs will be closed by 2030.

REs (Hydro-Wind-Solar-Waves etc) sources is getting cheaper month after month and will soon compete with CPPs.

Hopefully, new more efficient, safer, lower cost NPPs may be possible by 2040-2050 or so to complement other REs.