Qoros debuted the Qamfree engine with FreeValve technology in a concept car at the Beijing Motor Show in April 2016. “Called QamFree” in the Qoros application, FreeValve uses PHEA technology to replace the traditional camshaft-based method of controlling valve operation in an internal combustion engine. This results is much more precise and completely customizable control over valve duration and lift, on both the intake and exhaust sides. 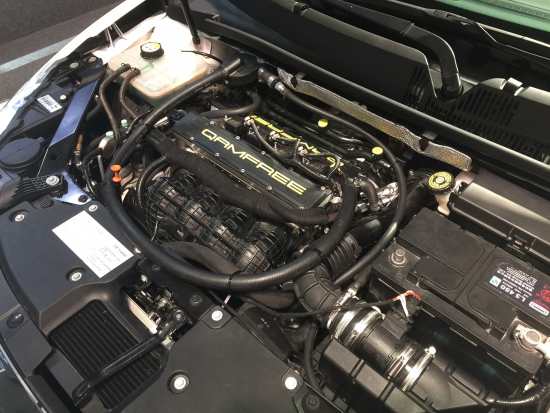 The engine on show at Guangzhou is a 1.6-liter turbocharged engine using FreeValve technology to produce 230 horsepower and 320 N·m (236 lb-ft) of torque. This represents a 47% increase in power, a 45% increase in torque and a 15% reduction in fuel consumption when compared to a traditional camshaft engine with similar specifications.

The benefits are not confined to significant performance improvements and better fuel economy. In implementing FreeValve technology, manufacturers are able to do away with expensive parts such as the throttle body, camshaft, cam drive, timing gear and cover, wastegate, pre-catalytic converter systems and direct injection systems.

The comparative FreeValve engine is 20 kilograms (44 lbs) lighter and much more compact, saving 50mm in height and 70mm in depth, which allows manufacturers exciting new vehicle design and packaging options.

FreeValve technology has taken many years of testing and refinement but the results are extremely satisfying. This production-intent engine offers Qoros significant savings in emissions, cost and weight. It also offers groundbreaking benefits to vehicle owners in terms of a near 50% increase in both power and torque, while actually reducing fuel consumption.

This demonstrator at Guangzhou marks the first driveable FreeValve prototype engine assembled with mass production in mind. Qoros will use a fleet of test engines in conjunction with FreeValve AB to further refine the technology to suit its own vehicles designs prior to mass production in an as-yet unnamed vehicle in the future.

The China-based automaker also showcased the Qoros 3 Q-LECTRIQ EV concept with 350 km (217 miles), acceleration from 0-100 km/h in 7 seconds; top speed of 180 km (112 mph) and 80% fast charging within one hour, as well as the Qoros 3 GT sports crossover. Two trims of the model—equipped with a 1.6-liter turbo-charged engine paired with either a six-speed manual or a six-speed automatic transmission—are available. In another area of future mobility exploration, Qoros is partnering with a leading mobility company to develop autonomous driving applications.

That's why im keeping my old dodge neon, i know that actual cars with old camshafts are obsolete, so i don't buy and im waiting for this engine before buying. Also don't be shy to implement a different expansion ratio compared to the compression ratio for further better fuel efficiency.

A lot is possible when you get rid of cams.

Kristian von Koenigsegg has a great quote where he compares conventional cam shafts to playing the piano with a piece of wood depressing all keys at the same time. FreeValve allows several degrees of freedom previously not available.

Some company once displayed a chart of the losses of energy while propelling a car down the road. Surprisingly (to me, at least), wind resistance was only like 12%. Throttling losses were around 20%, with engine cooling and exhaust losses being the biggest contributors, along with general friction.

Given that, I am inclined to believe that substantial savings are actually realistic using this technology.

The greatest concern is of course the longevity of the electro-pneumatic-hydraulic actuators. Buyers can only hope the backers have deep pockets if there is ever a call-back after, say, 3-4 years.

No, a small PHEV needs to have the simplest possible engine at the lowest possible cost in order to shift power train expenditure towards the electrical side. And the e-motor can compensate for whatever shortcomings a simple ICE has.

Madza 3 wants to put a single rotor as the range extender,
that would be an example of a simple design.

The only material factor holding back BEVs is the battery; and that is mostly the costs; and, as battery density increases, even costs become less a factor. all the other needed science is available and within costs...today. Mixing fossil fuel engines and electric motors is a waste of money and is senselessly being held back by the politics of fossil fuels.

The camless valve system is a brilliant design and can certainly be made reliable. Still...it is just another of the many complexities we have added to ICEs to make them cleaner, so I added it to my list:

ICE vehicles will not be going away (trucks, for example), so there are some attractive markets for which the camless valve system seems like an ideal next step.

The parallels to aero engines is remarkable. In the early 1950s, with the threat of turbine engines looming, piston engine companies pushed the technology to almost unbelievable levels of complexity, insisting that turbine engines would never be efficient enough. When the 707 prototype took to the air in 1954, the tipping point was reached. Are we watching the same thing with automobiles today? Is the tipping point near?

EV sustainer engines don't need the high peak power or broad operating range of ICEVs.  They can use mechanical valve trains with cam profiles optimized for their operating point, and be turned off the rest of the time.

Free valve technology allows more control over combustion process and simplifies the power plant. By the way the BEV is an extremely complex vehicle. Mechanical systems usually more reliable than electronics or systems that relay on chemical processes. Meaning, best way to survive harsh environment is mechanical low tech. Park you BEV at one of the Texas airport lots for a year.

Auto technology is maximizing the benefits of all technology to achieve best value for customer sales. They take the best of ICE, hybrid, and battery power for the cause. It looks like the future belongs to the best combination of low cost technology that will achieve least inconvenience for operator. Batteries have a very high cost, high weight, and inconvience burden. I don't see how they can compete will fuel energy. Utilize more ethanol and even the environmental benefits of the BEV fade.

@Fasteddie: Great Analogy!
The FreeValve Pneumatic-Hydraulic-Electric-Actuator would hardly simplify an ICE.
The components of a BEV (Motor, Inverter, Battery) are already very reliable and getting better e.g. Testers at UC Irvine cycled a battery electrode 200,000 times.
BEV range and charging times are also improving. The Porsche Mission E and other 800 Volt BEV systems have reduced 80% charging times to 20 minutes. Lucid Motors showed their brilliant prototype at the 2016 LA Car Show, it is another example of future BEV designs.
The Lucid Motors battery will be used in the 2017 Formula E Competition (partners include McLaren and Sony). The 54 kWh battery weighs only 250kg and can be recharged completely in 45 minutes. It can also be run for a complete race due to its Thermal Management System patented by Lucid (one of the problems with Tesla is that "Ludicrous mode" cannot be used on repeat runs).

Forgot to mention that the Lucid prototype has 1000 hp and the Lucid Motors Edna test van easily beats other very fast cars like the Nissan GTR and is as fast as the Tesla Model S.

FreeValve would simplify valve train and improve control. Pollution control should be simplified and more capable.

The BEV suffers a high rate of change and ensuing high obsolesce or loss of resale value. The vehicle electronics may be reliable, nonetheless complicated and difficult for owners and support services to prevent or trouble shoot problems. For example I just watched a news piece whereupon the two battery system of BEVs and hybrids was flummoxing tow trucks and drivers whom were current day, the most common stranded motorist.

The common liquid fueled vehicle enjoys extremely short refueling cycle with ubiquitous fueling stations designed around their convenience. Regulating the consumption of fuel is a very easy task for these vehicles as well as emergency refill or even to carry a spare 100 miles of fuel in the trunk. Liquid fuel is the energy of choice for almost all trucks, buses, cars, ships, lawn equipment, and off road equipment. The common ICE is improving at a rapid rate to decrease emissions and improve efficiency and with the assistance of hybrid technology and stored energy devices. The ethanol fuel stream is doing likewise or lowering the CO2 rating. Both systems just about have no end in sight for improvement. Also, the quality is improving to reduce maintenance and longevity. Not uncommon for these engines to operate vehicles for quarter million miles and heavy duty ones for a million miles. The engine is about equal to vehicle lifespan, so hard to do better than that. So, we need to think in terms of a moving target and forget thinking in terms of absolutes. The marketplace is efficient and will invest in products that meets their needs at an acceptable price. Environmental benefits of either are at best a trade off. Meaning the grid has an extremely long way to go to improve as well as to modernize. Probably best to give it a rest and allow the green power a larger portion.

You would think the easiest place to transition to battery power would be the stay at home equipment just a few feet away from plug in power and that one can highly flex the demand cycle. Also, this zone suffers the highest concentration of exhaust pollution per the two cycle engine. This should be the battle ground for the battery power. You look at the cost and power available- not much competition.