Researchers at Washington State University have developed a novel route for the production of jet fuel range alkanes at high carbon yields from plastics. The process combines catalytic microwave-assisted degradation of low-density polyethylene (a model compound of plastics waste) followed by hydrogenation.

In a paper published in the journal Fuel, the team reported that, depending on the catalyst, the overall carbon yields of organics from raw plastics were approximately 54 or 63%. The raw organics (with the higher yield) could be hydrogenated to fit JP-5 navy fuel at 200 °C, while the raw organics (with the lower yield) could be hydrogenated to match high energy-density jet fuels (e.g. RJ-5 and JP-10) under very low-severity conditions. 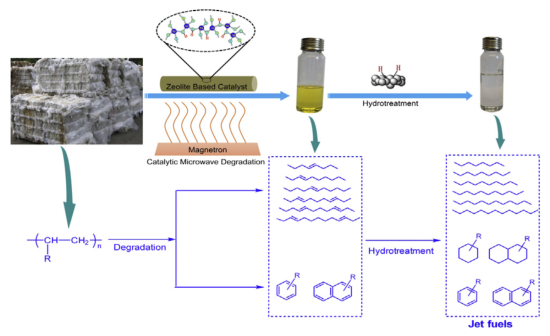 They also observed that, in contrast, plastics used as the feedstock during catalytic degradation usually garner a higher liquid yield than lignocellulosic biomass.

In this regard, plastic waste can potentially serve as ideal feedstock for the production of advanced fuels or valuable chemicals due to its high conversion efficiency.

Notwithstanding, there are elaborate research demonstrating the production of hydrocarbons from plastic waste; research on direct routes from plastic waste to high energy-density hydrocarbon fuels is still in its [in]fancy. To best of our knowledge, the catalytic microwave-induced degradation of plastics followed by hydrogenation process has not been developed. There is also no literature reported on tailored catalysts that converted plastics into jet fuels (kerosene). The innovations of this research were the integral process developed for the synthesis of diverse grades of jet fuels by using fabricated catalysts. Besides, the “ex-situ” catalysis following the microwave-induced degradation was implemented in a well-designed packed-bed reactor, which can remarkably contribute to the increase of liquid yield. Hence, this research can fill this knowledge gap in the production of diverse grades of jet fuels with high yields from plastics through catalytically integral processes.

The new process consists of two fundamental steps. The first step is the production of aliphatic alkenes and aromatic hydrocarbons by catalytic microwave-induced degradation; the second step is the hydrogenation of these unsaturated hydrocarbons into jet fuel range alkanes in n-heptane medium by using various types of Raney nickels as the catalysts to optimize the results.

In the study, the team used low density polyethylene (LDPE) in pellet form.