At a launch event in London, electric car company NextEV unveiled its brand, NIO and its electric supercar, the NIO EP9, which has achieved a new lap record at the Nürburgring Nordschliefe. On 12 October 2016, the EP9 lapped the 20.8 km (12.92-mile) ‘Green Hell’ in 7m 05.12s, beating the previous EV lap record held, marking it out as the fastest electric car in the world. Additionally, on 4 November, it broke the EV record at Circuit Paul Ricard in France, recording a time of 1m 52.78s, eclipsing the previous record of 2m 40s. 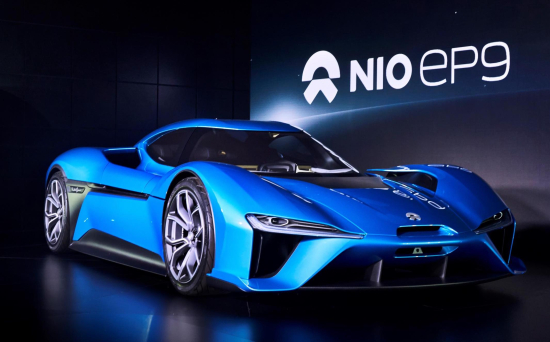 Due to its high performance envelope, the EP9 required a new and bespoke design of brakes which, in partnership with Alcon, achieve twice the brake torque capability of a GT3 car.

The carbon cockpit and chassis handles the physical demands of a car with 3G cornering capabilities (3.30 G longitudinal under braking, 2.53 G lateral in cornering at 230 km/h), with added structural solidity and aero efficiency. (A modern Formula One car is capable of developing 3.5 g lateral cornering force thanks to aerodynamic downforce.)

NIO designed a three-position active rear wing system and full-length floor diffuser. In conjunction with the front adjustable splitter and fixed aero features, these allow the car to achieve twice the downforce of a current Formula One car, the company claims.

The EP9 features an integrated e-control structure and sensor system layout, which could fit the latest autonomous driving technology.

Today we launched our electric supercar that broke the record at the Nordschliefe. The NIO EP9 was born to push limits and is the first stage of automotive production for NIO. It is a statement of our vision and technical and manufacturing capabilities. It is a best-in-class product that showcases what is possible with electric vehicles. We believe that when the car ownership experience exceeds expectations, electric vehicles will become the natural choice for everyone, leading to a more sustainable tomorrow. And with that, our vision of a blue sky will come true.

NextEV is a global start-up, designing and developing smart, high-performance, premium electric vehicles. It has more than 2,000 employees in San Jose, Shanghai, Munich, London and eight other locations. In October, NextEV USA announced that it was issued an Autonomous Vehicle Testing Permit by the California DMV and it would begin testing on public roads under the Autonomous Vehicle Tester Program guidelines as it progresses on its path to bring autonomy to market.

I want one for my morning commute.