Toyota Motor’s Central R&D Labs, along with Nippon Soken and four universities (Hokkaido, Tohoku, Kyoto, and Ritsumeikan) has developed the first method for observing the real-time behavior of lithium ions (Li-ions) in an electrolyte as a Li-ion battery charges and discharges. The researchers will present a paper on this method, results and the implications for battery design at the 57th Battery Symposium in Japan next week.

Toyota believes that this method—which combines high-intensity X-ray (synchrotron radiation) for high speed measurement at high resolution with a special, easy-to-observe electrolyte—will provide essential guidelines for R&D that aims to improve the performance and durability of batteries, which would lead to longer battery life, as well as longer driving ranges for plug-in hybrid vehicles (PHVs) and electric vehicles (EVs). 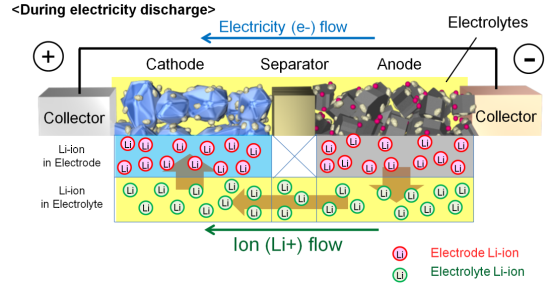 Li-ion deviation occurs in the electrodes and electrolyte as a result of charging and discharging, and such deviation has been believed to limit the usage area of batteries—one factor that reduces the area in which the maximum performance of the battery can be achieved.

When investigating the mechanism of Li-ion deviation, however, confirming the behavior of Li-ions in the electrolyte under the same environment and conditions as when it is being used in related products was not possible using existing methods.

The two main features of the observation method that Toyota developed to help solve this problem are:

By using the method described above, and a battery that is similar to that of related products such as laminated cell under the environment and conditions that resemble those of actual battery use, it is possible to observe in real-time, the process of Li-ion deviation that occurs in electrolytes during the course of battery charging and discharging.

Going forward, Toyota will observe the behavior of Li-ions caused by differences in the materials and structures of cathodes, anodes, separators, and electrolytes, as well as the differences in battery control. Analyzing the mechanisms that cause deterioration of battery performance will lead to R&D that can help to improve the performance and durability of batteries, to bring about longer battery life and longer driving ranges.

Will Toyota be one of the first to mass produce it or will it be Panasonic/TESLA, Samsung, LG, BYD, etc?

The news here is Toyota is working on battery research and they have been right along. There are just too many benefits to building EVs that Toyota couldn't ignore. For example; an electric drive line is super simple, especially when compared to all the complication and the short life of an internal combustion engine. Future EV life spans will be measured in decades, not years. And, we all will be renting EVs instead of buying them.

All this stuff about hydrogen by Toyota is nonsense to satisfy the oil politics of their country and ours. Wonder when they will announce their BEV?

This appears to be a useful research tool, but it would be good to know if they really have created any kind of serious advancement in power density or charging time. My hope is that this story is part of paving the way to kill off hydrogen fuel cells vehicles in favor of battery electric vehicles...soon!

Many researches would like to have XFEL technology at their disposal, but it is Not a Bench-Top and/or reasonably accessible technology. It requires an electron accelerator (.9999... C ), beam wigglers and EM tuner(s). It is very large and expensive technology.

Lad> All this stuff about hydrogen by Toyota is nonsense to satisfy the oil politics of their country and ours.

I think actually that they were trying to establish an automotive standard with a significant barrier to entry. Almost all of the new automotive entrants are building BEVs. Musk is on record as saying that Tesla could not have succeeded by building ICEs or PHEVs. Indeed, Fiskers flameout seems a cautionary tale, although successor Karma appears determined to make another run at the PHEV approach. Interestingly, their GM engine is EOL.

The barriers to entry in the automotive industry are still astonishingly high, but I believe it's no coincidence that there are four credible BEV market entrants with > $1b in funding.

The single ICE entrant, Elio, is still struggling to raise funds, and has been less successful on that score than the failed Aptera BEV / eRev.