GLM Co., Ltd., an electric vehicle engineering solution provider and a pioneer in electric vehicle manufacturing in Japan, launched its brand and showcased two of its models—the GLM-G4 and GLM-ZZ—at an event in Hong Kong. 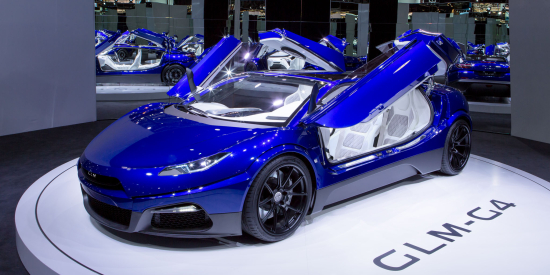 Based in Kyoto, GLM was established in 2010 and is the first Japanese electric vehicle manufacturer certified by the Ministry of Transportation. In the course of its development, GLM formed a number of direct partnerships with more than 100 vehicle technology companies to conduct research into and development of new forms of vehicles and transportation beyond conventional automobiles.

GLM launched its first car, GLM-ZZ, as Japan’s first electric sports car for the mass market in August 2014. Made almost entirely from parts produced in Kyoto, the car accelerates from 0-100 km/h in 3.9 seconds.

In October 2016, GLM presented the GLM-G4 at the Paris Motor Show 2016. The Company adopted its key packaged solution, including chassis, power systems and VCU, in manufacturing GLM-G4. GLM-G4 features a multistage transmission that improves the performance, which is not affected by the powertrain output. The model is installed with the insulated-gate bipolar transistor (IGBT) systems that help to reduce the switching loss and improve the electrical efficiency. GLM-G4 also has a light and solid chassis which is made of composite materials. With total power of 400 kW and torque of 1,000 N·m, the vehicle is able to accelerate from zero to 100 km/h in less than 3.7 seconds and to cruise at 250 km/h (155 mph) with a driving range of more than 399 km (248 miles) NEDC.

GLM plans to set up a workshop and R&D center in China to tap the demand in Greater China for EVs. GLM is also seeking partnerships with local automobile makers in mainland China. It will provide its engineering solution and services for its business partners.

Toyota could take a major step towards BEVs by buying GLM and/or with a join venture?