A new study from the US Government Accountability Office (GAO) concludes that the Renewable Fuel Standard program will miss its advanced biofuel targets due to the the high costs of creating advanced biofuel; the relatively low price of fossil fuel; the timing and cost to bring new tech to commercial-scale production; regulatory uncertainty; and other issues as challenges to increased production.

GAO was asked by Congress to review issues related to advanced biofuels R&D. The report describes (1) how the federal government has supported advanced biofuels R&D in recent years and where its efforts have been targeted; and (2) expert views on the extent to which advanced biofuels are technologically understood and the factors that will affect the speed and volume of production. GAO interviewed DOD, DOE, EPA, NSF, and USDA officials and worked with the National Academy of Sciences to convene a meeting of experts from industry, academia, and research organizations. EPA generally agreed with the conclusions of the report, the GAO said.

The RFS calls for further growth in advanced biofuels made from biological materials and that reduce life-cycle greenhouse gas emissions by at least 50% compared with petroleum-based fuels. However, production of advanced biofuels has not kept pace with targets in the RFS.

EPA, which is responsible for implementing the RFS, has used its authority to set annual volume requirements for advanced biofuels that are below the targets in the statute starting in 2014. For example, for 2016, EPA set a volume requirement of 3.61 billion gallons for total advanced biofuel, although the statutory target is 7.25 billion gallons. 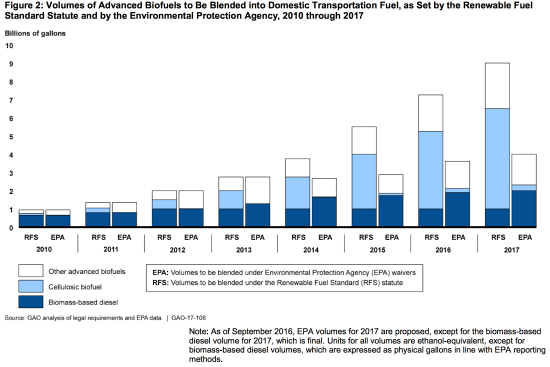 The remaining federal obligations during these years were through the Environmental Protection Agency (EPA), the Department of Defense (DOD), and the National Science Foundation (NSF), which obligated relatively less for such R&D.

Experts interviewed for the report said that although several advanced biofuels are technologically well understood and some are being commercially produced, there is limited potential for increased production in the near term.

Given that current advanced biofuel production is far below Renewable Fuel Standard (RFS) targets and those targets are increasing every year, it does not appear possible to meet statutory target volumes for advanced biofuels in the RFS under current market and regulatory conditions, GAO concluded.

Current production of cellulosic biofuels is far below the statutory volumes and, according to experts, there is limited potential for expanded production to meet future higher targets, in part because production costs are currently too high.

Experts told GAO that technologies for producing other fuels, such as some drop-in fuels, are technologically well understood but that these fuels are not being produced because production is too costly. Among the factors that will affect the speed and volume of production, experts cited the low price of fossil fuels relative to advanced biofuels. This disparity in costs is a disincentive for consumers to adopt greater use of biofuels and also a deterrent for private investors entering the advanced biofuels market.

Experts also cited uncertainty about government policy, including whether the RFS and federal tax credits that support advanced biofuels will remain in effect. While such policies should encourage investment, investors do not see them as reliable and thus discount their potential benefits when considering whether to invest.

No problem. EPA won't be around much longer.

Investors are not interested if the RFS didn't artificially push production requirements of uneconomical fuel. Meaning these fuels would never survive without the RFS, within a marketplace that could care less of renewable or low carbon fuel. So, what are the benefits of pushing advance biofuel production? Plenty. Keeping this ball rolling is important, just with low cost and ample supply of crude oil, the cost and need to keep the ball rolling may be high. That's the important question and why Congress asked the GAO to evaluate. It looks like the regs need to be dial back a tad.

Without ethanol we would be importing one million barrels of oil more per day. Cellulose ethanol is being made in quantities in the mid west TODAY.