Based on the success of two Irizar 100% i2e electric buses that have been operating in London since June 2015, London’s largest transport operator, Go-Ahead, is incorporating the buses into its fleet and has signed an agreement with Irizar that includes service and maintenance.

For over a year, these two buses have been operating on the busy routes 507, connecting Waterloo Station with Victoria Station, and 521, which connect Waterloo Station with London Bridge Station. The operating data has successfully fulfilled the objectives requested. With this change, both buses will begin to operate for longer periods on the 108 route which runs from Stratford International Station to Lewisham Station with different operating conditions. In addition, Irizar will offer comprehensive maintenance of the buses. 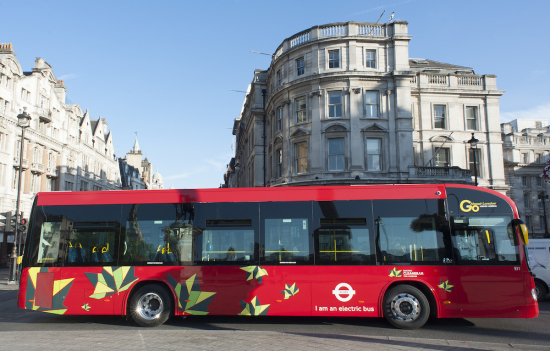 The first of these two units was delivered to TFL (Transport for London) as part of the “Clean Bus Summit” which took place on 29 June 2015 at London City Hall. The second was delivered in July 2015.

Along with our partners, we have successfully proved e-bus technology is no longer a thing of the future.  It is here, now and reliably serving London's travelling public.  We are proud to have led in this field and look forward to working with Transport for London and the wider industry to ensure a host of benefits for this, and future, generations.  The Irizar electric buses we have operated since July 2015 have been well received by drivers and passengers alike.

The main features of the two 12m buses include a continuous low floor and two double doors with an electric ramp located in the central door. A 282 kWh battery pack powers a 180 kW motor; operating range is between 160 km and 180 km (99 to 112 miles) under London traffic conditions. The buses also incorporate a heating-cooling unit for the driver area and complete anti-vandalism locks.

The buses have 26 seats + 1 PMR seat and a total capacity of 60 people. The vehicles also incorporate all the on-board fleet management systems and telemetry which are standard in London buses.

Go-Ahead London is the largest bus company in the capital, with a 24.1% market share. It employs approximately 7,300 staff from 17 locations, mainly in South and South West London. The vehicle fleet is just over 2,400 buses. These are the first two 100% electric buses with European technology Go-Ahead has incorporated into its fleet.

Spain-based Irizar Group is a leading business group in the bus and coach sector. Irizar e-mobility is the Group’s new company, created in 2016, the business of which is focused on offering integral electromobility solutions for vehicles as well as their main components and systems for cities.

The product range includes 10.8m and 12m city buses, which have been operating since 2014, articulated or bi-articulated buses and other electric vehicles to serve cities.

The prototype of Irizar e-mobility’s 100% electric, 18m articulated bus (BRT - Bus Rapid Transit) is currently undergoing durability and reliability testing prior to its distribution to clients.

Decent specifications, but what is the curb weight?