The California Air Resources Board (CARB) has posted a revised draft of California’s proposed Short-Lived Climate Pollutant (SLCP) Strategy. SLCPs are a category of pollutants which remain in the atmosphere for a relatively brief period, but have global warming potentials that are much higher than those of CO2. SLCPs may account for an estimated 40% of global warming, increasing the impacts of climate change.

SLCPs include black carbon (soot), methane and hydrofluorocarbons (HFCs)—the fastest-growing source of GHG emissions in California and globally—which are used as refrigerants, aerosol propellants and insulation. 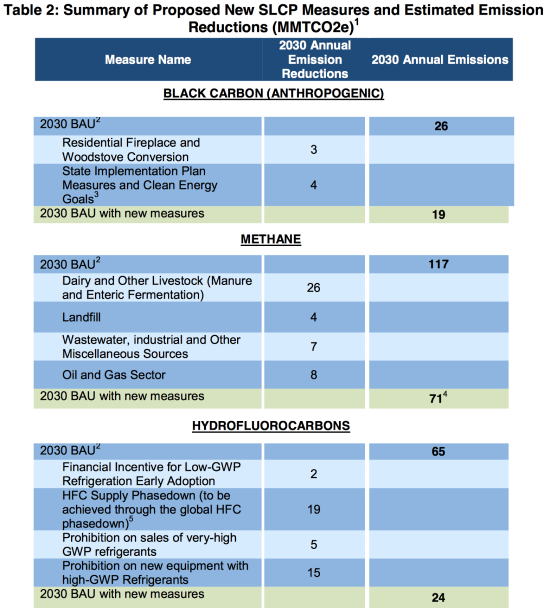 With the reduction in on-road black carbon, regulators are turning to focus on off-road mobile, fuel combustion in the industrial and power sectors, and woodstoves and fireplaces.

Methane. The major sources of methane in California are livestock (~30% of the state’s methane emissions), followed by landfills and oil and gas production. Methane is 72 times more efficient at trapping heat in the atmosphere than CO2, which is the most prevalent global warming gas. CO2 remains in the atmosphere for up to a century. Methane and the other SLCPs have much shorter lives, but do disproportionate damage.

New legislation (Senate Bill 1383, Lara) requires, among other things, that state agencies and affected stakeholders develop measures to reduce methane emissions from dairy and other livestock operations. The revised draft of the SLCP Strategy includes a more detailed look at how this might be accomplished through extensive collaboration with the industry and other stakeholders. The draft SLCP Strategy also takes into consideration public and stakeholder comments on other aspects of the revised strategy, as well as other legislative requirements.

The SLCP Strategy also establishes a goal of reducing fugitive methane emissions from oil and gas by 40% below current levels in 2025 and a minimum 45% in 2030, and from all other sources by 40% in 2030. This aligns with the federal government’s current goal of reducing methane emissions from oil and gas operations by 40–45% below 2012 levels by 2025.

The ARB is developing a regulation to reduce fugitive methane emissions from the oil and gas production, processing and storage sector, which will be among the most stringent such regulations in the country.

HFCs. More than three-quarters of HFC emissions in California come from the use of refrigerants in the commercial, industrial, residential, and transportation sectors.

The “Kigali Amendment” resulting from the annual Montreal Protocol Meeting of Parties in October 2016 in Kigali, Rwanda targets phasing down the production of HFCs globally. The agreement requires a reduction in the production and supply of HFCs for developed countries, including the US, as follows: 10% reduction in 2019; 40% in 2024, 70% in 2029, 80% in 2034, and 85% in 2036. Developing countries will not have to begin the phasedown until 2029, and will be allowed until 2045 to reach the 85% reductions in HFC consumption.

The ARB will sponsor a third-party assessment of the impact of the Kigali Amendment on HFC emissions and reductions in California, especially as they pertain to meeting the 40% emission reduction goal. The assessment will be completed in early 2017, and pending results of the assessment, specific HFC reduction measures may be revised accordingly.

In this SLCP Strategy, we outline SLCP emission reduction actions that provide a wide array of climate, health, and economic benefits throughout the State. The State’s organic waste should be put to beneficial use, such as for soil amendments/compost, electrical generation, transportation fuel, and pipeline-injected renewable natural gas. Organic wastes converted to biogas could supply enough renewable natural gas for about 2 million residential units. Practical solutions must be developed and implemented to overcome barriers to waste gas utilization for pipeline injection and grid interconnection. Additional data on SLCP sources must be collected in order to improve California’s SLCP emission inventory and better understand potential mitigation measures. Finally, the State should provide incentives to accelerate market transitions to cleaner technologies that foster significant system-wide solutions to cut emissions of SLCPs. Many of the sources and sectors responsible for SLCP emissions are concentrated in communities with high levels of pollution or unemployment, which could especially benefit from targeted investments to improve public health and boost economic growth.

CARB began publicly evaluating controls for SLCPs with the first AB 32 Scoping Plan in 2008. Since then Governor Brown signed SB 32 (Pavley), codifying a reductions target for statewide GHG emissions of 40 percent below 1990 emission levels by 2030. SLCP emission reductions will support achieving these targets. Also, Senate Bill 605 (Lara, 2014) requires ARB to develop a plan to reduce emissions of SLCPs, while SB 1383 requires the Board to complete and approve the plan by 1 January 2018. SB 1383 also sets targets for statewide reductions in SLCP emissions of 40% below 2013 levels by 2030 for methane and HFCs and 50% below 2013 levels by 2030 for human-caused black carbon, as well as provides specific direction for reductions from dairy and livestock operations and from landfills by diverting organic waste.

Research now shows that immediate action to cut super pollutants in California will reduce damage to forests and crops, lower background ozone and help clean the air in the state’s most polluted regions, including the Central Valley.

The SLCP Strategy is due to come before the Board for consideration in March 2017.

Why would CARB exempt forest fires from the SLCPs list? Is their mission to regulate human activity or improve air quality? The article mentioned that forest fires the largest polluter. Why would they merely pass that by? Wouldn't it seem logical that more good could be forthcoming by efforts to minimize forest fire? That this effort may be the most cost effective and with little burden of regulation. For example, providing good info to public to utilize forestry science to improve wood lot. To log off dead and diseased trees or brush to lower fire risk. May a change in tree specie be desirable? Maybe drone patrolling to rate fire danger sections with plans to change that. Maybe develop a better system of spotting fire. Better high speed response, such as drone aircraft.

I get the feeling that California regulators don't like these options as it's cheaper for government to expense the cost to business and vis a vie to citizens by the regulation route. Meaning no sweat off their back to merely use a pen and force of government.

Trees. CARBites have Smokey the Bear to battle wile fires. Smokey is a Patriot so he doesn't Pay taxes or fines. He lives off the and he smells too.

Carbites don't roast chestnuts on an open fire during the Holidays either. They are all atheists.

O.K. so I haven't done a proper exhaustive study but common sense suggests black carbon is not short lived, unless it's contribution to the melting of ice is expected to become negligible in the < 100 year Ce time frame. That will only be true if I.E. polar ice extent also becomes negligible.

Your point on the relevance of including bio black is interesting

To suggest that it can be seen as not determined or controlled by human activity is not really true.

State forests and woodlots as well as urban environments (which are often sited in vegetation friendly and productive locations) are managed by people. The percentage of global bio burn that can be attributed 'nature' may be (my conservative) estimated at 50% but less if referring to the specific (modified) land areas described in the article.

It is easy to see why this whole question is very complex while being a top order priority.

Avoiding the question is not a solution.

You can help to prevent forest fires. You cannot prevent a lightning bolt.

CARB wants to attack the residential woodstove industry. They would have started years ago but they were low on staff. CFCs/Refrigerants are handled by the Feds.

How do you regulate natural carbon emissions?

A lot of makework.

That's my point Dr., they shouldn't or couldn't. Nonetheless, the natural fire emissions are huge. If CARB is working to improve air emissions they probably would be more effective by working with the forestry department to minimize fire danger. This would be the biggest bang for the pollution buck. Regulations wouldn't be effective or the solution. We need a new and updated technology improvement or education. They just have to improve a tidbit to make a dramatic decrease in pollution.

Don't dismiss the value of timber loss or jobs created to make this happen. BTW, the stove certification and high cost to improve emissions. Look at the data and realize the quality of wood and stove operation of primary concern. Meaning, just education is better than savaging the wood stove manufacturers.

Dr.
No one claims tobe able to control lightning since Thor.
You most certainly can manage the course of forest fire by strategic management. People have modified huge tracts of nature going back 10's of thousands of years.

Just that wildfire prevention hasn't been high on the radar. Strategic planning awareness is not new but the R.O.I. and risk has been changing in step with the shifting climate factors.

If you understand the effects temp 'water and fuel or 'weather and fuel type' on the fire triangle, you will see the similarity to the ability to ignite fuel air in a combustion engine. It is quite sensitive to stoichiometry.

Change the parameters and you enable /disable ignition.

We KNOW water stress is increasing along with the average temp as well vegetation types and fire management regime.
As the influence of weather can determine the risk within a time frames of days, we need to understand that system is very finely balanced.That balance is a reflection of 100,000? years of relative stasis.

There is no evidence of previous fire in that forest type.

We can sit back and let nature have the last say or get proscriptive. The definition of an 'accident is UNFORESEEN - not neglect.

Would high tower Wind turbines, equipped with appropriate lightening arrestors, help to channel the short high voltage bursts to the ground and reduce the number of associated forest fires, while producing more than enough e-energy for the local residents?

It worked very well with mountain top Radar and Communication sites to greatly reduce lightening damages while protecting nearby forests from fires?