Geographers provide new insight into commuter megaregions of the US

Geographers from Dartmouth College and the University of Sheffield have provided new insight into the economic geography of commuter megaregions in the US by using an empirical approach that combines visual interpretation with statistical analysis. The findings appear in an open-access paper in PLOS One and shed light on an old geographic problem: how to divide space into coherent unit areas.

These emerging megaregions reflect the economic links woven by millions of commuters traveling to and from work each day. They map out complex networks in which economic systems, natural resources and infrastructure are linked. Understanding the way functional geographic connections cross over the existing borderlines of states and regions is key for developing institutional forms that match the patterns of the contemporary world.

… the empirical problem of dividing space into discrete, bounded, internally-homogenous regions has long been a vexed problem for geographers, with attempts at providing an objective method for regionalization stretching back more than a century. While more recent scholarly work has emphasized concepts of connectivity and relationality as theoretical lines of inquiry which lead beyond the confines of bounded space, the goal of partitioning the United States into functional megaregions shows that the old problem of regional delineation remains very much alive—and unsolved. A geography based solely on what Khanna calls “connectography” fails to offer a practical framework within which to define the bounded geographic areas which continue to mark out spheres of legal jurisdiction, planning authority, transportation, and political representation.

In this paper, our contribution is to offer an empirical approach to detecting and defining megaregions which takes the insights of a relational, flowing concept of geography and puts them to use in service of delineating coherent, bounded regions. We employ a data set of more than 4,000,000 commutes as a proxy for patterns of economic interconnection, given the importance of commutes in structuring the geography of labor markets. The volume and resolution of this data set allows us to depict the interconnected nature of these labor markets at a national scale and, we hope, allows us to make a substantive methodological contribution to the study of megaregions in the United States.

The study examines 4 million commuter flows based on Census Tract data from the Census Bureau’s American Community Survey (ACS) 2006-2010. The Census Tract was selected as the spatial unit of measure given that with an average population of 4,000, this unit was geographically large enough to reflect a major number of employers.

The geographers applied two methodologies—a visual heuristic approach and an algorithmic approach—and explain the shortcomings of relying on one approach. For the visual heuristic approach, which is based on a trial-and-error method to produce results, the ACS data was filtered based on distance and flow volume thresholds until visually effective results were obtained. For this approach, 50 miles was used as the threshold to measure long distance commutes.

The visual approach enables an interpretive depiction of centers of employment and suburban flows; however, with no hard edges within the visual, it is difficult to determine where a functional commuter region or community may exist. This approach therefore requires subjective guesswork to determine regional edges.

The algorithmic approach tries to assign the census tracts or nodes into communities based on the number of commuters, using the Combo software developed at MIT’s Senseable City Lab. The algorithm relies on the connectivity between nodes and does not take into consideration geographic proximity. This method can identify spatially contiguous areas that one would not ordinarily be able to determine visually. The algorithm is able to make judgement calls that one cannot make with a map.

Below are visuals from the study reflecting commutes to Minneapolis-St.Paul within a 50-mile radius based on the visual heuristic approach (top) as compared to commutes within the Twin Cities region using the algorithmic approach (bottom). The map of the Twin Cities region illustrates the spatial connectivity or in this case, the functional commuter regions or communities, within the broader megaregion of which the largest part is Minneapolis-St. Paul. 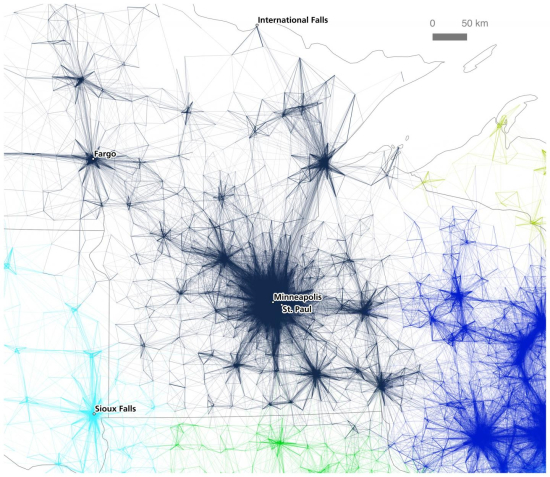 The study highlights the complexity of accurately capturing spatial economic analyses and is a reminder that spatial data visualizations are subjective and are not value neutral. Moreover, it reinforces how megaregions and the functional regions that comprise them serve as another way to define community, demonstrating the role that economic geography can have in assessing the needs of society.

The results of this study point to a dynamic conclusion about the possibility of isolating coherent regional units: even within a massively-interlinked spatial structure, it is still possible to evaluate a structured geography of unitary regions. Such a regionalization is evident not only in a visual interpretation of commuter networks, but also emerges in an algorithmic partitioning of this same network. The detection of recognizable communities through this computational analysis suggests that human geography does in fact display statistically-significant patterns of structured regionalization, and that this regionalization matches interpretive descriptions of “megaregions.” Such empirical analyses provide a scaffolding on which policymakers can evaluate the appropriate territorial shape and size of districts ranging from regional transit zones to electoral constituencies. However, as shown in the interplay between the visual and algorithmic methods of assigning communities to megaregions, we must be careful not to assume that an absolute or final structure of regional divisions can be determined. Given the massive complexity of the connections inherent in national-scale commuter geography, these analyses should be understood as adumbrating broad regional patterns that must then be subject to functional and practical scrutiny.