Exceeding its initial program targets, the plug-in 2017 Chrysler Pacifica Hybrid (earlier post) has earned an electric-mode fuel economy rating of 84 miles-per-gallon-equivalent (MPGe) from the US Environmental Protection Agency (EPA). No other minivan has ever come close to this rating. (As examples of SUV/MPV-style electric vehicle fuel efficiency, the 2016 Tesla Model X AWD - 75D is EPA-rated at 93 MPGe combined city/highway; the Model X AWD - P90D is EPA-rated at 89 MPGe; and the 2016 BYD e6 compact MPV is EPA-rated at 72 MPGe. All figures from fueleconomy.gov.)

The new benchmark reflects the Pacifica Hybrid’s combined city- and highway-cycle performance in electric-only mode, as tested by the EPA. FCA US had estimated the vehicle would achieve 80 MPGe, which represents the distance a vehicle can travel using a quantity of fuel with the same energy content as a gallon of gasoline. 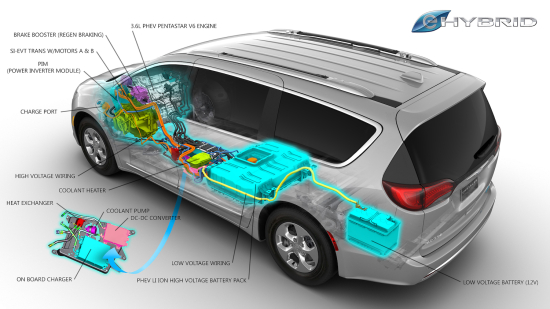 In addition, the EPA gave the all-new minivan a rating of 10 in its Green Vehicle Guide. The score relates to a vehicle’s combined performance on fuel economy and greenhouse-gas emissions. This marks the first time a minivan has achieved a 10—the highest possible rating—in this category.

A large share of credit goes to the vehicle’s eFlite dual-motor electrically variable transmission (EVT). It is exceptionally well-suited to deliver the primary attributes we sought to infuse in the Pacifica Hybrid’s propulsion system: class-leading efficiency and superior refinement.

eFlite, the Pacifica Hybrid’s distinguishing technology, is an in-house FCA US innovation. It was developed by a team of engineers assigned exclusively to the task of delivering powertrain efficiency within the functionality envelope customers expect from minivans.

The result is increased efficiency, refinement and improved component packaging.

The Pacifica Hybrid’s 16-kWh lithium-ion battery pack (from LG Chem) is located under the second-row floor, keeping the rear cargo area as roomy as ever and preserving the third-row Stow ‘n Go seating and storage, plus room for seven passengers.

The battery pack, covered by up to a 10-year/150,000-mile transferable warranty, may be fully recharged via the 6.6-kWh on-board charger in as little as two hours using a 240-volt (Level 2) charger, available from Mopar through dealers. With a 120-volt (Level 1) charger, which comes standard with the vehicle, the Pacifica Hybrid can be fully recharged in approximately 14 hours. Charging times can be scheduled by the customer for optimal electricity usage, taking advantage of off-peak rates. Level 3 chargers and “superchargers” cannot be used to charge the Pacifica Hybrid.

With a 120-volt (Level 1) charger, which comes standard with the vehicle, the Pacifica Hybrid can be fully recharged in approximately 14 hours. The vehicle also benefits from regenerative braking.

When the battery’s energy is depleted to a certain threshold, the Pacifica Hybrid becomes a part-time electric vehicle, like a conventional hybrid, to maximize energy and efficiency. Power to the wheels is supplied by the electric drive system or supplemented by a specially adapted new version of the Pentastar 3.6-liter V-6.

Based on the newly upgraded Pentastar engine architecture, the new hybrid engine features an Atkinson cycle combustion system for improved pumping efficiency without compromising vehicle performance, due to its hybrid electric motors working in tandem with the engine when full load performance is required. The Atkinson cycle leaves the intake valve open longer prior to combustion, which helps to reduce pumping losses for increased efficiency.

The front cover and front accessory drive system were re-engineered due to the elimination of the alternator and power steering pump, which is common to most hybrid engines.

Friction reduction improvements, along with ignition and fuel injection improvements found on the upgraded Pentastar V-6 are all part of the specially adapted hybrid Pentastar engine, while two-step valve lift and cooled exhaust gas recirculation have been removed with the addition of the Atkinson cycle combustion system.

Because Pacifica Hybrid owners could feasibly drive for weeks or months using just the battery power, the Pacifica Hybrid constantly monitors the average age of fuel in the tank. If needed, the Pacifica Hybrid will automatically shift from electric to hybrid mode to cycle through any fuel that is more than 90 days old, eliminating the need to add a fuel stabilizer—one less thing for customers to think about.

The Pacifica Hybrid’s 7-inch color thin-film transistor (TFT) cluster delivers important information at a glance for the driver. The cluster’s display changes color to indicate whether the Pacifica is operating in electric mode (teal) or hybrid mode (blue), while both the battery level and fuel level are always displayed. The Pacifica Hybrid’s total range (combining both battery and fuel) is also displayed. An “efficiency coach” display guides owners to drive more efficiently and maximize the time spent in battery mode.

Unlike any in its minivan competitive set, all 2017 Chrysler Pacifica Hybrid models are equipped with an e-shift rotary dial shifter (Electronic Transmission Range Selection, ETRS) located on the integrated center console that electronically actuates shift selection. The e-shift system replaces traditional shift cables and levers with software and electronics.

The EPA estimates the 2017 Chrysler Pacifica Hybrid’s annual fuel cost, gas and electricity combined, at $900. The vehicle pricing starts at $34,495 with available US federal tax credit, not including state and local incentives. The MSRP of the non-hybrid Pacifica minivan is $28,595.

Am I missing something here? After saying "No other minivan has ever come close to this rating." they list as examples, two Tesla models that surpass it.

A guess - the other two Tesla are bevs not hevs

The Teslas are not minivans.

This is a GREAT start for PHEV minivans.  The one thing I would plan within the next couple of model years is going to a 4-cylinder turbo-Atkinson instead of the much bulkier V6.

My thoughts exactly.
P.S. How ya gonna put up with this prick?
And a merry Xmas.

A soccer mom people mover that gets 30 mpg and 30 miles on electric. Take kids to and from school but never use fuel.

"...the Pacifica Hybrid will automatically shift from electric to hybrid mode to cycle through any fuel that is more than 90 days old..."

Only 90 days and it starts burning through the fuel in the tank? This "feature" undermines a lot of great engineering.

Unfortunately, blended gasoline has a short shelf life and cleaning gummed fuel injectors is not something that new-vehicle owners expect to do regularly.

Perhaps Chrysler will sell an LPG version of this hybrid someday, and the issues with deterioration and evaporation of fuel will all disappear.