Eco-Motive, a startup developing what it calls the first dual-fuel “H” engine (earlier post), revealed photos of a full-scale prototype of the Eco-Motive H-Motor. The prototype was completed in February 2016 and was built to reflect the engine configuration when installed in a vehicle; testing in driving applications will begin soon.

The H-shaped engine has parallel left-side and right-side vertical inline piston banks, each with a crankshaft and pistons, cylinder head, and individual fuel feeds, but sharing a common power transmission system. The H-motor—essentially two separate engines housed within the same engine block—can be powered by either gasoline or compressed natural gas (CNG), at the driver’s decision.

Each bank of the engine is powered exclusively by one of the two fuels; with the push of a button, the engine can switch from the bank of cylinders fueled by gasoline to the other set using CNG, or vice versa. 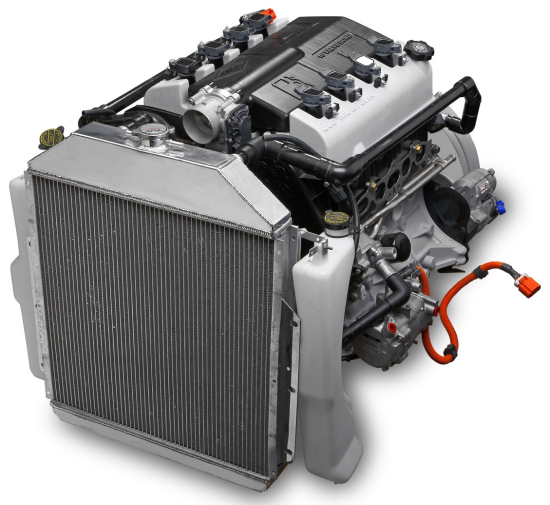 Our Eco-Motive H-Motor is a revolutionary twin vertical, hybrid internal combustion dual fuel engine that can run on CNG or gasoline. It’s exciting to see all of our research, development and engineering culminate into a full-scale prototype. In the coming weeks, we’ll begin testing the prototype in real-world driving applications.

The H-motor is fed by dual tanks on either side of the drive shaft. A fuel inlet for each tank can be located on the side of the car where the tank will reside. Users can switch from natural gas to regular gasoline from inside the vehicle; the vehicle will stay in this mode until switched by the driver. The exact specifications may vary depending upon the OEM.

The engine was invented by Herns Louis, veteran of more than 30 years in the parts manufacturing industry ranging from automotive to aerospace, specializing in computerized parts machining. This twin-bank engine is a result of Louis’s experience, along with his vision to help meet an emerging market need for more efficient, lower-exhaust CNG engines. A patent for the motor was granted in November 2014.

Buy two engines and get one for free???

It seems to indicate you cannot run two fuels at the same time. If it cannot run both at the same time there would need to be some period of time when neither engine was running. If that is the case then the engine power would drop to some really low number due to the flywheels and cause a startling change in the driving dynamics.

So can anyone figure out why such an engine couldn't run any mix you wanted at the same time? Why not run the gasoline engine at 15% average but variable load and the NG engine at 30% constant load?

You get the power of one engine for the weight, complexity and cost of two!

Nissan's variable-compression scheme is much better than this.  One engine with the mechanical ability to get close to optimum for very different fuels beats two almost-separate engines hands down.