BP approves revamped $9B Mad Dog Phase 2 project in the deepwater Gulf of Mexico; down from original $20B cost

BP has sanctioned the $9-billion Mad Dog Phase 2 project in the United States, despite the current low oil price environment. Mad Dog Phase 2 will develop resources in the central area of the giant Mad Dog field through a subsea development linked to a new floating production platform with the capacity to produce up to 140,000 gross barrels of crude oil per day from up to 14 production wells. Oil production is expected to begin in late 2021.

In 2013, BP (operator, with 60.5% working interest) and co-owners, BHP Billiton (23.9%) and Union Oil Company of California, an affiliate of Chevron USA Inc (15.6%), decided to re-evaluate the Mad Dog Phase 2 project after an initial design—pegged at some $20 billion—proved too complex and costly. Since then, BP has worked with co-owners and contractors to simplify and standardize the platform’s design, reducing the overall project cost by about 60%. Today, the leaner $9-billion project, which also includes capacity for water injection, is projected to be profitable at or below current oil prices.

This announcement shows that big deepwater projects can still be economic in a low price environment in the US if they are designed in a smart and cost-effective way. It also demonstrates the resilience of our strategy which is focused on building on incumbent positions in the world’s most prolific hydrocarbon basins while relentlessly focusing on value over volume.

BP discovered the Mad Dog field in 1998—one of BP’s largest discoveries in the Gulf of Mexico to date. Field production began in 2005 from the initial Mad Dog development, which included a truss spar floating platform equipped with facilities for simultaneous production and drilling operations. The Mad Dog platform is currently BP’s only floating spar facility in the Gulf.

Continued appraisal drilling in the field during 2009 and 2011 doubled the resource estimate of the Mad Dog field to more than 4 billion barrels of oil equivalent, spurring the need for another platform at the field. (Earlier post.)

The second Mad Dog platform will be moored approximately six miles to the southwest of the existing Mad Dog platform, which is located in 4,500 feet (1,372 meters) of water about 190 miles (306 km) south of New Orleans. The current Mad Dog platform has the capacity to produce up to 80,000 gross barrels of oil and 60 million gross cubic feet of natural gas per day. 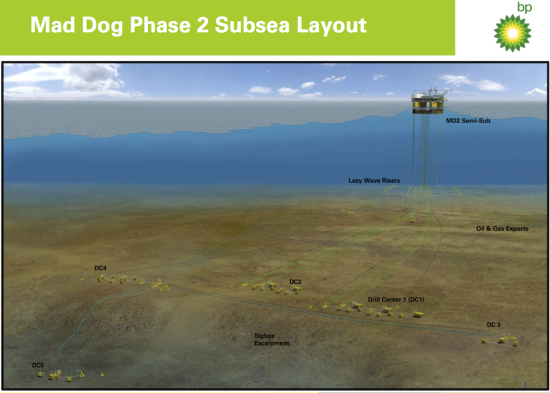 BP plans to add approximately 800,000 net barrels of oil equivalent per day of new production globally from projects starting up between 2016 and 2020.

Earlier this year, BP successfully launched a major water injection project in its Thunder Horse field that will allow for the recovery of an additional 65 million barrels of oil equivalent. BP also is moving forward with the Thunder Horse South Expansion project, which will add a new subsea drill center roughly two miles from the Thunder Horse platform.

These oil producers are really efficient, we cannot say the same to electric car producers that struggle to capture 0.7 percent of the market even with heavy subsidies and regulations. It prove that engineers that we heard here are morons.

You would think that with all the damage BP did,
they could come up with a better name than Mad Dog.

The project was named Mad Dog long before the Macondo disaster.

Perhaps but you can always change the name.