Chevrolet’s first nine-speed automatic transmission makes its debut in the 2017 Malibu and will be available in the 2017 Cruze Diesel and 2018 Equinox, with another Chevrolet model to follow by the end of 2017. The new, General Motors-developed Hydra-Matic 9T50 nine-speed is paired with the available 2.0L Turbo engine in the Malibu, contributing to an EPA-estimated 33 mpg highway (7.12 l/100 km)—a 3% increase over the 2016 model with the eight-speed automatic.

The new nine-speed has a wider 7.6:1 overall ratio compared to the eight-speed transmission, with a “deep” 4.69 first gear that supports excellent off-the-line acceleration and a “tall” 0.62 top gear for low-rpm highway cruising. That balance optimizes acceleration and fuel economy and reduces engine noise during cruising. 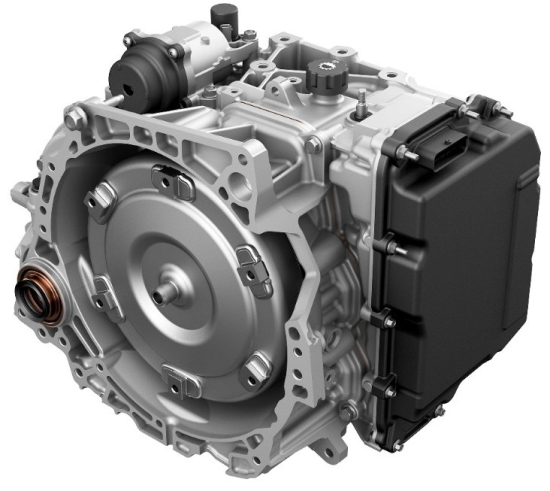 The smaller steps between the gears, compared to the eight-speed, enable smooth, almost imperceptible upshifts, for excellent refinement. No matter the engine torque or vehicle speed, the 9T50 is always in the perfect gear.

The new transmission also supports stop/start technology that can help save fuel by allowing the engine to shut down in certain stop-and-go driving conditions.

GM will rapidly deploy the new Hydra-Matic nine-speed automatic transmission as an option on 10 vehicle models by the end of 2017.

Selectable one-way clutch. Developed for the tight packaging requirements of transverse propulsion systems, the new 9T50 nine-speed automatic has an on-axis design, where all the gears are in line with the crankshaft, and GM’s first application of a selectable one-way clutch. Both features help reduce the package size, making it roughly the same size as a six-speed transmission.

The selectable one-way clutch, which can hold torque or freewheel—depending on the desired operating mode—contributes to a smaller overall size by eliminating the need for an additional clutch pack.

The selectable one-way clutch is one of the biggest enablers of the 9T50’s balance of efficiency and refinement. It also symbolizes GM’s acumen when it comes to designing advanced, compact multispeed transmissions.

For precise and smooth shifts, a specific strategy is used in the selection of the gearsets, clutches and torque converter. Five planetary gearsets are used with four stationary clutches and three rotating clutches, saving space compared to freewheeling designs. Gears change from second- to ninth-gear ratios with precise clutch-to-clutch shifting, where the clutch is engaged in one gear at exactly the same time it is released from another.

The first-to-second upshift is a freewheeling shift. The second-gear clutch engages while the first-gear one-way clutch spins freely, contributing to greater refinement at lower vehicle speeds.

Additionally, this planetary-type automatic transmission employs new torque converter technology to help it deliver smooth take-off performance and additional refinement. The converter features a hyper-elliptical oval cross-section that reduces the thickness of the torque converter, keeping the overall width of the engine and transmission as narrow as possible for packaging advantages.

Shift controls and active oil management. Shift controls include automatic grade braking that selects a lower gear to help maintain desired vehicle speed when coasting or braking on a downgrade. This takes advantage of engine braking to help prevent unwanted acceleration and can help reduce the need to brake during a descent. The control module receives input that monitors brake pedal usage, vehicle acceleration, throttle position, grade and whether a trailer is connected to the vehicle.

The 9T50’s hydraulic system is controlled electronically to deliver the pressure and volume required for various operating temperatures for optimal efficiency. The valve body side cover acts as an internal expansion tank, holding the excess oil until it is required and then returning it to the sump when needed.

The 9T50 is filled with DEXRON-VI fluid that does not require changing under normal driving conditions. It was developed for a more consistent viscosity profile, consistent shift performance in extreme conditions and less degradation over time.

Interest to see all this unneeded mechanical engineering and internal combustion engine complication when it all can be replaced with a simple electric motor with one moving part, that is basically the same in all BEVs. What we have here is million of dollars misdirected on mechanical experimentation.

@Lad: We just need to keep pushing. The tipping point is almost at hand.

I predict it will arrive by 2020 if that idiot Trump doesn't blow everything up first.

Just go electric already. Geez, what a waste of resources.

Reality 1: The internal combustion engine is still going to be with us for a looong time. At this point a 1% improvement in gasoline engine fuel consumption saves more petroleum than the entire market share of EVs does if you completely neglect whatever it takes to generate the electricity that they are using.

Reality 2: Buyers will have the choice between a Cruze (diesel or gasoline) with this transmission or a Bolt. in the same dealer. THEY will decide. And that is as it should be.

Add some more shorter gears. You can go faster.

An old boss once told me if you can drive faster than everyone else, you don't need Rear-View mirrors.

So why should GM engineers be more or less happy with fewer or greater number of gear ratios? Well, if the result is greater efficiency across the power/torque curve, then why not do it if their cost to deliver is Par with the earlier build.

Don't buy that and keep your old car till it fell apart.

Brian, you assume that the numbers will stay the same which is a silly assumption. This effort is going to take years to roll out to any appreciable number of ICE vehicles.

Yet most major manufacturers already admit that at least 25% of their new sales will be electric by 2025. And that is before the panic that Germany went into now as they realize their auto industry could be behind in the race to electric and before Toyota just announced their CEO will personally run their new EV division.

You're fighting the last battle, not the next one....which is always a fools errand.

@ Brian:
'most manufacturers' admit no such thing. That's as false as claiming 'the science is settled' regarding global warming. Here's BMW's gloomy statement regarding electrics of late:
http://gas2.org/2016/12/06/bmw-claims-high-battery-costs-will-hamper-electric-car-sales-years/

A realistic fan of Battery Electric Vehicles (BEV) here. How many BEVs do we think the industry is prepared to deliver to market by this supposed tipping point in 2020? If the number is less than 50 million a year, then you need to be prepared for ICE vehicles to be around for a long time.

Considering that Volkswagen Automotive Group's most aggressive comments point to 2.5M by 2025, Tesla's stated (overstated?) capacity for their Fremont plant is around half a million, Hyundai-Kia has been heard stating 300 thousand and Mercedes has laid out a plan that probably gets to about a million....I count about 3.8 million by 2025. Not 2020, 2025. So, when is it that BEVs will exceed volume of ICEs in a 100 million unit per year global market?

BEVs will grow in both number and types of applications and overall volume. That's a good thing. But expect ICE powered vehicles, often with some electric motor assist, to be around for our lifetimes.

SJC's projections for 2020 and 2030 may be close to reality. Resistance to change and continued high battery cost and battery performance limitations will delay a major switch to BEVs by up to 10-15 years.

However, higher performance, lower cost, extended all weather range, mass produced 130 to 150 mpge PHEVs could sell as much and even better than BEVs for the next 10+ years.

Let experimental electric ADVs do the ground work with this new technology for the next 10+ years.

Anything in the 2025 timeframe and beyond is probably in the vicinity of the expected production lifetime of engines and transmissions developed today. As of right now, we need better powertrain efficiency out of combustion engines and stepped-gear transmissions.

Don't accuse me of fighting the last battle. I'm fighting TODAY's battle. We have to get through today to have a hope of getting to tomorrow. For what it's worth, a customer of mine builds parts for both Tesla and for the Chevrolet Bolt, and another one just got an order for production equipment destined for Tesla. I'm powertrain-agnostic ... but I deal with reality - including today's reality. And today's reality is that I have to travel for work, there are still no publicly accessible DC fast charging stations in Ontario outside of Toronto (which does me no good) and outside of Tesla supercharging stations, I can't afford C$100,000 for a car which means those Tesla supercharging stations do me no good, and it's snowing outside with a forecast of bitter cold temperatures this coming week.

Frankly, the reason that EVs to date have not sold is that EVs sold to date have either been priced out of range of the average person (Tesla) or have sucked (everything else). Sorry, but if that Nissan Leaf that the EV evangelists promote so much can't make it to my sister's house (nevermind be able to get there and back) ... it sucks. Sorry, if getting to my sister's house requires finding an obscure public access charger and stopping for three hours partway through the trip (160 km) ... it sucks.

I hope that the Chevrolet Bolt will be a game changer ... a reasonably affordable EV that doesn't suck ... but I also know the sales projections.

As long as these situations persist ... we'll need more efficient gasoline engines and transmissions. We'll be needing them for quite a long time to come.