According to a new report from market intelligence firm Tractica, advanced driver assistance systems (ADAS) component shipments will increase at a healthy pace over the next decade, rising from 218.1 million units shipped in 2016 to 1.2 billion units by 2025. By that time, the market intelligence firm forecasts that the ADAS component market will reach $89.3 billion in annual revenue. 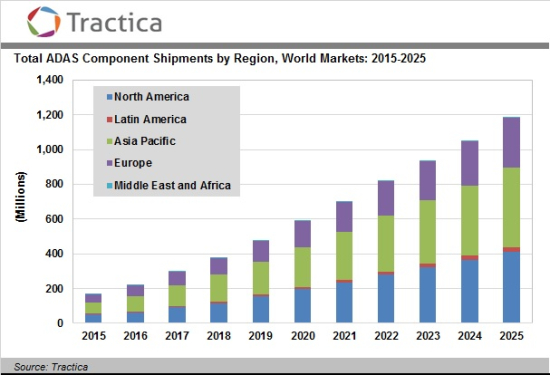 Advances in a number of fields, including camera and imaging technology, high power, low energy consumption processing, advanced neural networks and data processing, and others, have shifted the focal point of technology innovation from the computer in the 1990s, to the mobile handset in the 2000s, and in the current decade, to the automobile.

Kirkpatrick added that, while fully connected and autonomous vehicles are likely a decade away from hitting the roads en masse, the stepping-stone technologies that will be refined and improved upon for the driverless cars of the future are rapidly being integrated into the vehicles of today.

Obviously,
and we want them with a full-electric range of 1000 miles, and cheaper than the cars of today, and combined with solar cells with a 40%-efficiency, at 0.1 $/watt.

While this will somewhere in the near future be the case, meanwhile, small advances can save us a lot of troubles already.

Tesla is selling fully self driving capable vehicles and if they can do it now so can all the old automakers. There is no magic going on at Tesla they just work harder and more intelligently than the rest of the industry.