SAE International is working to ensure that electric vehicle wireless power transfer systems from different manufacturers can interoperate seamlessly with each other to prepare for commercialization in 2020. Idaho National Laboratory (INL) and TDK R&D Corporation, along with the US Department of Energy (DOE), automotive companies and suppliers have completed bench testing to support the SAE Technical Information Report (TIR) J2954. (Earlier post.) SAE TIR J2954 is a guideline for the wireless charging of plug-in electric vehicles that was published by the SAE International (formerly the Society of Automotive Engineers) earlier this year.

The SAE TIR J2954 provides guidance to ensure performance and safety of Wireless Power Transfer (WPT) Systems provided from one vendor as well as interoperability when parts of the system are provided from different vendors. For the first time, interoperability between the so-called Double D (DD) and Circular Topologies has been demonstrated between 3.7 to 7.7 kW with efficiencies exceeding 85-90% under aligned conditions.

SAE J2954 standardization enables any compatible vehicle to pull into a wireless power space and have automated charging without doing anything except parking. Automated wireless charging can also be done in conjunction optionally with autonomous parking. Interoperability between power ratings (up to 7.7kW) and different topologies (DD and Circular) were tested at INL-TDK and proved possible even under extreme offset conditions. Idaho National Lab and TDK has provided invaluable bench data to validate SAE J2954 Wireless Power Transfer. Vehicle data along with autonomous parking and charging (up to 11kW) is needed before a J2954 standard can be published, and the national labs from the US DOE offer an ideal location to have this done.

INL researchers contributed to the SAE J2954 validation by testing wireless charging systems from three companies—Toyota, WiTricity, and Qualcomm—in the summer and fall of 2016. The WiTricity system—submitted in cooperation with Nissan—and the Qualcomm system—submitted in cooperation with Jaguar-Land Rover—both operated at up to 7.7 kW. The results of the INL tests will be reported to SAE International in December 2016 and SAE will publish the results with members of the test program in 2017.

Engineers from Toyota, Nissan, WiTricity, and Qualcomm collaborated with both INL and TDK on site in a series of tests on the interoperability of their respective wireless charging systems. The tests allowed those engineers to adjust their company’s systems in real time to improve interoperability performance. 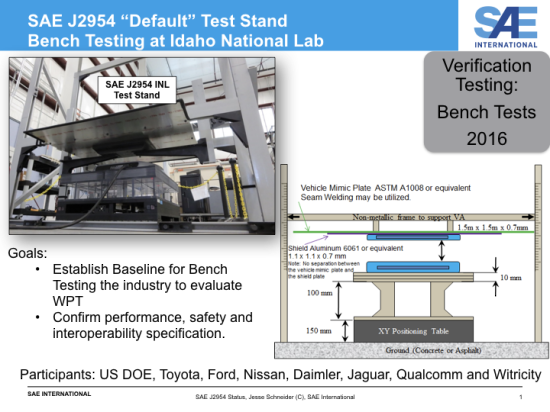 Wireless charging systems work by using electricity from the grid to generate an oscillating magnetic field that reaches upwards from a charging pad on the floor of the garage or parking space to a power capture pad mounted to the undercarriage of the electric vehicle. This magnetic field transfers the energy from the ground pad to the vehicle, where it is converted to electric energy that charges the vehicle battery.

Idaho National Lab has successfully validated SAE TIR J2954 on the bench for test systems provided by the industry, which is an important milestone. This gives confidence in the interoperability, safety and performance values within this guideline.

—Richard “Barney” Carlson, an INL engineer who headed up the wireless charging tests.

The SAE TIR J2954 also has a significant part of its content dedicated to EMC (electromagnetic compatibility) and EMF (electromagnetic field) validation of WPT systems. The same companies that underwent testing at INL continued their testing at TDK R&D Corporation’s Texas based electromagnetics lab for this aspect of the evaluation. Tests on various configurations were carried out on an OATS (Open Area Test Site with metallic ground plane), on an OFTS (Open Field Test Site with real earth ground plane), and on an EMF planar scan range (for human exposure).

Developing EMC and EMF standards and measurement methodologies is accompanied by the implicit responsibility of protecting incumbent services with the target of establishing sustainable limits that allow coexistence and maintain safe exposure levels for humans and medical devices. Part of this strategy involved establishing a relationship between the SAE J2954 Taskforce and the American Association of Medical Instrumentation.  To aid in this effort, TDK leveraged its broad expertise in high power, low frequency magnetic field EMC/EMF measurement experience along with the proper testing venues to accommodate the efficient collection of data across all of the participants WPT platforms.

The data will be used to further develop SAE J2954 guidelines which will ensure that wireless charging systems entering the market meet established requirements for safety, efficiency, performance under real world parking behavior, and interoperability. Interoperability is viewed by the industry to be essential to broad scale adoption of wireless charging, as drivers expect any vehicle to be able to charge at any charging station. The bench testing at INL and TDK will help SAE develop the next phase of standardization.

Future very quick chargers (350 to 700 KW) will probably be auto-connect with the help of auto-position electrified vehicles.

Both future home and public charging facilities could be fully automated and hands free.

Its in shopping malls and so on that wireless will really make the difference, by encouraging opportunity charging.

Its especially good news for PHEVs.

question: One How will these chargers cope with adverse weather, like rain or snow?

One question: How will these chargers cope with adverse weather, like rain or snow?

It's great to know that much progress has been made since I first approached this interesting subject. See: http://evworld.com/blogs.cfm?blogid=1156.

Rest stops and restaurants on the Interstate highways.

Even if you only get a small charge at the mall that can be more miles, 6 kWh can take you 20 miles which could be the drive home. It could be set so that when the car is charged it moves to park then lets you know by cellphone, freeing up the charger for another self parking car.

Autonomous EV taxi service without wireless charging will be not possible.