LiquidPiston, a developer of advanced combustion engine technology, received the award for the first phase of a program to realize the full capability of its patented high-efficiency hybrid cycle (HEHC) engine. This is the second award DARPA has made to LiquidPiston in the past 18 months, following an earlier test program for a different LiquidPiston rotary engine prototype, which achieved promising results. (Earlier post.)

The X4 is designed for extremely high specific power, with an objective of 1.5 hp/lb, making it up to ten times (10x) more powerful than a standard diesel engine with the same weight. The entire 40 hp engine is targeted to fit into a 10" x 8" x 8" box and weigh just 30 lbs. In this first phase of the program, LiquidPiston will build a test rig that will support future optimization efforts towards these objectives. 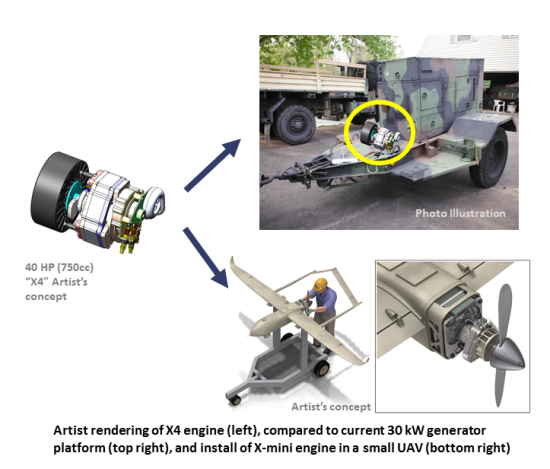 Our goal is to create a reliable X4 test rig that will support optimization of the X-engine architecture and the HEHC cycle. Combined, the cycle and architecture offer a compression-ignition, diesel-fueled rotary-engine power solution that is a fraction the size and weight of a comparable piston engine, while offering the advantages of greater fuel efficiency, quieter operation and reduced vibration.

LiquidPiston’s X Engines are non-Wankel rotary embodiments of the company’s High Efficiency Hybrid Cycle (HEHC). In contrast to other rotary engines, the X engine has a higher CR, and a stationary conical/spherical combustion chamber suitable for direct injection (DI) and compression ignition (CI). As with the Atkinson or Miller cycles, the X engine takes advantage of over-expansion. This is done by changing the locations of intake and exhaust ports asymmetrically which allows for the extraction of more energy during the expansion stroke.

The X Engine’s few moving parts consist of a rotor (the primary work-producing component) and an eccentric shaft. Except for ancillary parts such as injectors, fuel pumps, and oil pumps, there are no other moving parts. LiquidPiston’s X Engine architecture geometry allows for standard materials and 2-D manufacturing to be used, greatly decreasing the design, build and testing cycle.

The HEHC combines high compression ratio (CR), constant-volume (isochoric) combustion, and overexpansion, and has a theoretical efficiency of 75% using air-standard assumptions and first-law analysis. The rotary engine architecture shows a potential indicated efficiency of 60% and brake efficiency of >50%. The cycle elements include: Might be very good for a range extender for a serial hybrid or BEV.
Also for hybrid aircraft etc.
Lets see what the problems are when they really get them going.

The idea to continue to develop obsolete Internal combustion engines makes no sense because they are too inefficient...they waste 80% more energy than they use and they pollute the air and water and destroy the health of the people.

These are misdirected funds that should be used to build BEVs at a lower cost so people can buy them.

This appears to be a very good engine for propeller driven aircraft and drones. DARPA has a very good track record for picking winners. If you doubt this, the internet that you are now using was originally a DARPA project that was started in 1969. I hope that this project works out.

Lad, There are many places where batteries are the answer but high endurance aircraft is probably not one of them nor is lightweight compact power generation.

"lightweight compact power generation"
As in series hybrid, this is a good engine but few good designs make it into applications nor markets. The six cycle has been offered for 40 years, it is a great idea with no takers. It is not technical, it is inertia.

Those who hold that the solution to everything is batteries simply prove that they do not understand the subject.

There is a sheaf of technical solutions, with very different performance envelopes, which are best for the job in different applications.

I am generally assumed to be a fuel cell advocate here, although it is in fact more accurate to say that they are an option which should not be dismissed, but if you want very high energy density, this motor looks hard to beat as there is so much energy in the fuels it can use, and it needs no pressure containment.

In other characteristics such as silence and being pollution free at point of use it is not going to do as well as alternatives.

Its a matter of sorting out the best option for the job in hand, not of determining the sole solution to everything.

If this can be made to work at reasonable cost and without gotchas then it is going to find a lot of uses.

I see this being very good for range extenders like others have pointed out... biggest draw back is going to be emissions and long term durability. Not saying that emissions issues cant be addressed downstream.

But if they can get those numbers out of such a small little device it will be pretty great.

Range extenders for most EV style cars would have to be in the range of 20-40hp peek, which, if you are trying to power a defroster and heat the passenger compartment in the winter, that 7,500-15,000 watts of waste heat becomes a pretty valuable thing.(could be a life saver in an emergency)

I do believe in Batteries, but I don't believe they will solve all our issues, there are physical constraints that disallow current and most future speculation about battery technology to exist in vehicles as we are accustom to. This is why range extenders tend to be the necessary evil.

There are only a few front runners that I see, Turbines, combustion engines, and Fuel Cells, and a trailer full of more batteries, and overhead trolley lines.

Near future we'll see more Volt like vehicles. Mid future trucking will move away from diesel to alternatives like hybrids comprised of smaller diesel and turbine style generators.

I think in about 20 years we will have more market penetration of Fuel Cells than we do with the BEVs today. I believe still that BEV only vehicles will be rather short range 100-200 miles, and virtually absent in the workforce other than some short route box trucks.

I believe that the battery technology has a long way to go before dethroning a hybrid setup.

I'm very confused by your statement.

Its easiest to look at energy and its conservation.

the Hydrogen bonds in the fuels which break apart allowing it to make water and CO2 (ideally) only have so much energy. That's a known quantity per gallon of fuel.

You can look to how much power is output per given amount of fuel, and you can then deduce that x amount goes to heat/friction losses.

Electric motors are in the ball park of 80-95% efficient. Gasoline and Diesel engines are about up to 40% with some eaking out some more.

Gasoline cars only waste about 60-75% of the energy in. So within the realm of Gasoline engines they waste almost double the energy in, not 500%

But if you look well to well, it muddies the water up a bit, especially if you have coal as a primary source of electricity.

The government has a website where you can go select your car, and your mileage and compare amongst plugins and the conventional vehicle. It will also tell you how much CO2 and other things you'll generate.(In my local area, its better for the environment to drive my fiesta, than it is to own a plugin, according to them.)

I personally don't agree with the import barrels of oil on there, US get close or is a net exporter sometimes. Its those darn Canadians selling us that cheap oil.

There have been ceramic engines with higher temperatures and higher efficiencies, but they don't last. A six cycle is 50% more efficient than a standard SI I.C.E. without the exotic materials.

What about Utah? California is not an island yet.

I was pretty sure California in the recent past was using some non-carbon-free electricity.

Taking some external combustion process like using coal to generate steam, then transmitting it, then converting it to DC, then back to AC through the drive motor. Is no small task.

Fueleconomy.gov is telling me 305g/mile (210 at the vehicle level) for my car, and telling me 310g/mile for a new tesla.

What's strange is that gap gets even wider the more percentage I stay on the highway.

If you go through a therm of natural gas in a turbine charging an EV or burned in an I.C.E. you end up with about the same efficiency and pollution. The one benefit of the EV is renewable sources of electricity, which is a BIG plus.

I agree with you in that EVs are cleaner than most ICEs, and I am looking forward to the end of ICEs.

Mechanically ICEs are impressive that they even work as well and long as they do.

I rather we frack, and build out CCNG plants and do away with coal. Double our efficiencies.

we have several hundreds of years of NG in the US, and its only getting stretched longer as efficiencies increase.

it will probably take 50 years before we significantly move away from diesel and gasoline.

I'm excited for the model 3.

I am even more excited for the solar roofs that tesla debuted. If America, in the name of national security, started funding solar roofs on new construction, or something as radical, it could change the course of the nation.

National security is an easier way to sell the green movement. Sure, we are unlikely to use all of our Natural gas or petroleum reserves in the ground. But for the economy, and the cost of energy, you can stabilize it with renewables. Wind is at a point where it is cost competitive with coal.

Solar, is but isn't. It needs large capital investments to make it really work. (People could lease panels from the government at competitive rate).

The national grid needs a major overhaul. For any of this to work. the smart grid needs to happen. DC high tension lines, even 12v-480v DC delivered to point of use could save 20% of our nations electricity. (more so if our country runs on plug-in vehicles)

Great for field portable equipment like generators and water pumps.

This is good engineering.

It IS good engineering. It is basically a three lobe rotary with internal passages in the rotor.

We need to start living under ground, at least earth berm on North and north West sides of structures with live vegetation on the roofs. South and south east are passive solar sides.

I am not sure where the Solar panels go. They partly contribute to global warming, although I think they are a necessity.

At http://www.pattakon.com/pattakonPatWankel.htm a different rotary engine is presented with working surface (whereon the seals abut and slide) not cylindrical (as in the Wankel and in the LiquidPiston) but 3D-curved, enabling a better sealing and a higher efficiency.

If Liquid Piston crack this engine in reliability, emissions and efficiency, these will be used on range-extenders. Then bye, bye, for ever appalling piston/crank engines.