BMW will stage the world premiere of the new BMW 5 Series Sedan and the US premiere of the BMW Concept X2 at the North American International Auto Show (NAIAS) in January in Detroit. Also part of the line-up at the BMW stand will be the new BMW 530e iPerformance plug-in hybrid, the BMW M550i xDrive, and the BMW 6 Series model range. BMW ConnectedDrive will be showcasing a selection of new services.

The BMW 530e iPerformance offers the full breadth of BMW 5 Series Advanced Driver Assistance systems and the latest technology introduced with the new 5 Series, combined with eDrive plug-in hybrid powertrain technology. In the US, the BMW 530e iPerformance is the fourth member of a growing portfolio of iPerformance (PHEV) models already available at US dealers. (Globally, there are six, with two additional models in China). The 2018 BMW 5 Series iPerformance will be available at US dealers in spring 2017. Pricing will be announced closer to market launch. 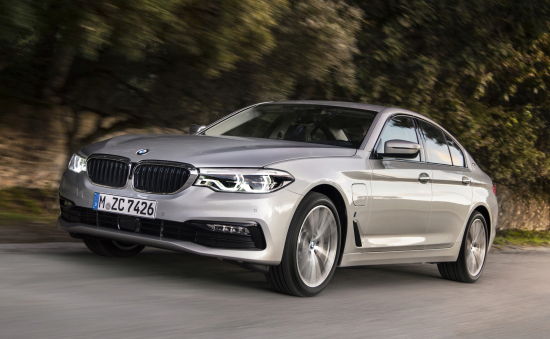 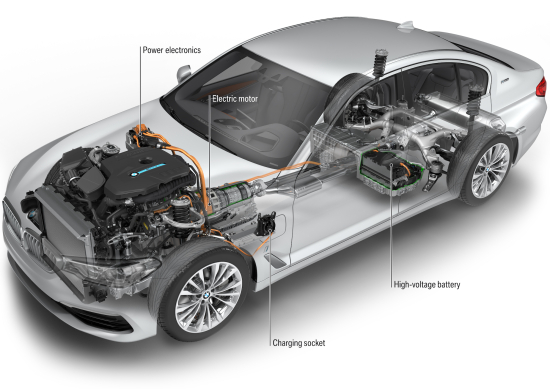 The BMW 530e iPerformance has a range of up to 650 kilometers (404 miles) in real-world driving and is capable of covering distances of up to 50 kilometers (31 miles) purely on electric power at a maximum speed of 140 km/h (87 mph).

The electric motor and combustion engine direct their power to the sedan’s rear wheels in the BMW 530i Sedan or all four wheels in the BMW 530i xDrive sedan via the standard 8-speed Steptronic transmission with paddle shifters. Positioning the electric motor upstream from the transmission allows the transmission’s ratios to be used in all-electric mode too. This dispenses with the need for a torque converter, offsetting some of the weight penalty of the additional drive unit.

The high-voltage battery pack consisting of lithium-ion cells with a total capacity of 9.2 kWh has been placed in a space-saving location underneath the rear seat and includes efficient refrigerant cooling with a highly integrated low-temperature circuit. Due to to the battery’s installation, the BMW 530e iPerformance offers full use of the trunk and a flat load compartment floor.

The battery can be charged to full capacity in under 7 hours from a residential 120V outlet using the OUC (Occasional Use Cable), while tailor-made solutions enabling safe, straightforward charging are available through BMW 360° Electric Lifestyle, such as the BMW Installation Services and BMW Solar Energy programs. The BMW Charging Station uses its output of 3.6kW - 7.2 kW (16/32 A, 240 V) to reduce charging time to under three hours. The progress of the charging process can be tracked via a graphic in the car’s instrument cluster.

As in all the other models in the new BMW 5 Series line-up, the navigation, telephone, entertainment and vehicle functions grouped within the standard high-resolution 10.25-inch iDrive display can be controlled not only using the iDrive Controller, but also by the iDrive Touch screen display or with the help of the Intelligent Voice Assistant. Optional BMW Gesture Control which offers a particularly intuitive and easy way of operating commonly used infotainment system and telephone functions allows the driver and passenger another convenient way of interacting with iDrive 6.0.

Driver Assistance Systems. The new BMW 530e iPerformance comes with an extensive range of assistance systems which can be used in conjunction of eDrive mode. Utilizing the Blind Spot Detection system when switching lanes, Active Lane Keeping Assistant with Side Collision Avoidance steers the vehicle back into its lane if the sensors detect another vehicle in the lane. Two systems, providing a semi-automated driving capability are Active Lane Keeping Assistant & Traffic Jam Assistant. Together, these systems operate between 0 – 130 mph and use smooth, comfort-enhancing steering interventions to keep the vehicle in lane. The latest generation of the system features improved image recognition and software algorithms to keep the vehicle reliably on course. In certain situations, particularly in stop & go traffic, the system also uses the vehicle in front as an additional reference point.

Dynamic Cruise Control (DCC), which is standard on the BMW 5 Series Sedan, maintains any selected speed between 19 – 130 mph. It also supports energy-saving coasting by decoupling the engine from the powertrain when the driver lifts off the accelerator at higher speeds.

The new and improved Active Cruise Control (ACC) with Stop & Go uses radar to adjust the pre-selected speed to the traffic situation. The system operates at all speeds up to 130 mph and is capable of braking to a standstill in stop & go traffic and automatically senses if the vehicle in front is moving once more. If the vehicle has been placed into standby mode by pushing the resume button on the steering wheel, the all-new BMW 5 Series can automatically start moving again up to 30 seconds after coming to a full-stop.

The ACC system now also takes into account highway exits and traffic circles where it adjusts the acceleration dynamics to suit these special traffic situations. The control technology monitors two vehicles ahead so that vehicle speed can be adjusted earlier and smoother. Heating elements ensure that the front-mounted radar sensor remains fully operational even if it’s snowing.

The Lane Departure Warning system operates at speeds between 40 – 130 mph. If the forward-facing stereo camera detects that the vehicle is straying from its lane, Active Lane Keeping Assistant helps the driver steer back on course with smooth and seamless steering interventions. Utilizing the Active Blind Spot Detection system (12-130 mph) when switching lanes, Active Lane Keeping Assistant with Side Collision Avoidance steers the vehicle back into its lane if its sensors detect another vehicle in the next lane.

Side Collision Avoidance, which operates at speeds between 40 and 130 mph, warns drivers by means of a visual signal or steering wheel vibration if another vehicle has drifted too close to the side of the vehicle. If the system detects sufficient room on the other side of the vehicle, it correctively steers the vehicle in this direction and out of a possible accident. This corrective steering assistance can be overridden at any time by the driver.

Another new function contained with Active Driving Assistant Plus is the Evasion Aid. If a quick lane change is required, for example when the vehicle in front brakes aggressively, the evasion aid— which operates at speeds up to 100 mph—supports the necessary evasive steering action. Faster steering and counter steering during an evasive maneuver results in reduced vehicle instability, supported by Dynamic Stability Control (DSC). While executing the maneuver, the Evasion Aid also uses information from the vehicle’s sensor systems to check how much unobstructed space is available around the vehicle. At speeds over 100 mph, the system no longer provides actual steering support and instead focuses on maximizing vehicle stability.

BMW Connected onboard. With the launch of BMW Connected in the USA and Europe in 2016, BMW has introduced an all-encompassing digital concept designed to aid personal mobility. Using the flexible Open Mobility Cloud as a basis, BMW Connected seamlessly integrates the vehicle into the user’s digital life via multiple touchpoints, such as an iPhone, Apple Watch, Android smartphone or smartwatch. New additions, introduced in the new BMW 5 Series Sedan, include BMW Connected Onboard, which allows personal information such as the next navigation destination, estimated arrival time and current weather conditions at the destination to be shown on the car’s display. BMW Connected is also able to transfer the user’s personal mobility agenda from their smartphone straight to their car.

3D Surround View. Surround View and Remote 3D View offer peace of mind by allowing owners monitor their BMW 5 Series at all times. The system shows a bird’s-eye view of the driver’s car as well as a three-dimensional image of the area surrounding the vehicle. Any obstacles, including curbs, or other vehicles or pedestrians that suddenly appear can be spotted.

ParkNow and On-Street Parking Information. The integration of the ParkNow service means that on-street parking spaces and garages can be easily located, reserved and paid for. Reservations can either be made while en route from the navigation system or in advance via the ParkNow smartphone app or website. Over 150 parking garages are currently affiliated with the ParkNow network in the US alone, with that number expected to grow to over 500 affiliated garages by mid-2017.

Once the selection has been made via the navigation system, the driver is directed straight to the chosen parking place and an electronic ticket is generated which grants access to the reserved space. On-Street Parking Information (OSPI) is receiving its world premiere in the all-new BMW 5 Series Sedan. This cutting-edge technology helps to alleviate the problem of vehicles searching for a parking space, which accounts for a large part of traffic congestion in metropolitan areas. OSPI works similar to the Advanced Real Time Traffic Information system, using historical and current data to draw conclusions regarding the availability of parking spaces on route within the coverage area. The system then uses a model to predict the odds of finding an open parking spot. A color coding on the navigation map displays the systems suggestions.

This is just another and most unwanted planet destroyer from the old auto industry. What is needed is affordable zero pollution transportation. The key to that is self-driving BEVs.

Moreover, as 80% of all driving is done alone we mainly need to develop a self driving tandem two seat BEV that will only need 30kwh to get over 200 miles range. We can make twice as many of those BEVs on the same size factories as if we make standard five seat BEVs. People using a driverless taxi to drive alone to work, school or to go shopping do not care about whether it is done in a two seat car or a five seat car. They care about the price per mile and the wait time for the driverless taxi to pick them up once it is ordered from their smartphone.

This is why two seat BEVs will rule. We can make more of them faster for less money. The driverless BEVs can outcompete the gassers as fast as they can be produced because they have much lower cost per mile during the life of the car. This is why Tesla and others should focus on making easy to mass produce two seat driverless cars once the Model 3 has been used to perfect the driverless tech. Needless to say the two seat driverless BEV should only be used for taxis and not come with any human steering controls. That will also make them less costly to mass produce.

Cheer up, this is a fabulous car. If you do low mileage, it will be almost all electric, but you can take a 400 mile spin if you want to and refuel in 5 minutes - what's not to like?
My only comment is that while you may be able to drive 30 miles on electricity, at up to 87 mph, you won't be able to do 30 miles at 87 mph.
(Also, it might be a bit expensive).
What I would like would be a cheaper, lower performance version: (say 0-60 in 8 or 9 seconds and max speed of 130 mph).